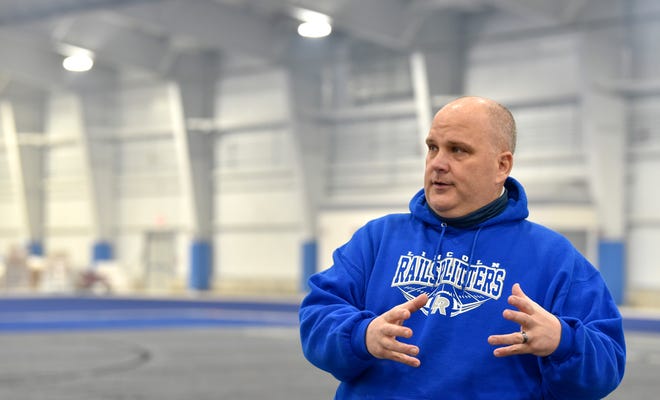 Ypsilanti — Chris Westfall would take several minutes out of his busy schedule as Ypsilanti Lincoln’s athletic director the last few months and walk into the school’s new 118,000square-foot indoor Lincoln Athletic Building to just admire the site, and think about the possibilities that his student-athletes would be able to use it for in the years ahead.

Westfall, who has also been the school’s football coach for the past dozen years, will be able to work with four players at a time next week with the 80-yard field inside the facility.

The structure can be used in sections with baseball playing in one area and softball practicing in another. Also included is a 300-meter track.

“The climate of this happening, that 2017 team that lost to (Detroit) King in (football) the quarterfinals, that first round of the playoffs we hosted the first Lincoln home playoff game ever,” Westfall said. “It rains, 38 degrees and the (grass) field comes apart. I probably took 25 phone calls from Lincoln parents, ‘Why don’t we have turf? What are we going to do about it?’

“They wanted to get a group together to talk about the issue. They didn’t know it at the time, but we were six months into the conversation about how do we sell this? We got the group together, then talked about this (indoor facility) too.”

Westfall bleeds Lincoln’s colors gray and blue. After all, he took over a terrible football program, helping Lincoln end a 30-game losing streak in the 2008 season opener before guiding Lincoln to its first state playoff appearance in 2011. He proceeded to lead the school to its first district championship in 2017 before that state quarterfinal loss to Detroit King.

Sure, Westfall emphasizes the indoor facility is for Lincoln’s student-athletes, but it also will be used to host the state indoor track meet and other things. Concordia University’s football team will practice there since it will be playing this spring starting in late February. 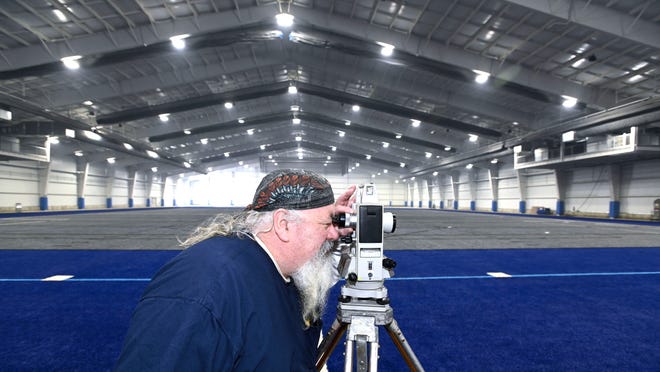 Westfall said he invited Eastern Michigan’s football team to hold some spring practices in the fieldhouse.

Westfall said members in the community may use the facility — which also showcases a 1,600-square foot room with treadmills, elliptical machines and other exercise equipment — for a monthly fee.

“During the school day when the fieldhouse is open you have access to all of it,” said Westfall of the community members. “Staff will be sitting at the desk, you come in and swipe your card and use it like any athletic facility. In the afternoon when school ends, we sort of shut the fieldhouse down and it becomes Lincoln’s to use, and then whether it’s 7:30, 8 it converts into a rental building.

“These curtains come down and protects the perimeter,” he said. “You can drop it in thirds or in halves, so a couple of weeks from now when we have the teams in here, we’ll have four-player quarterback workouts, golfers hitting in nets, soccer going up and down, throwers in a section, pitchers and catchers working, softball kids working all at the same time.

“The perimeter net goes around so track kids can run and not get taken out by a lacrosse ball. We can subdivide it in a bunch of ways, so what’s cool is how you can take that net down on the far third and now I have almost a full softball field squared in. You take that two-thirds net down and you have a full baseball infield to work on, and then the cages sit outside the net so there in the North-D zone. Obviously, the South-D zone is all track material and North-D zone is turf so when we come in here for football practice we have 80 yards of turf, all the room in the world.

“It’s designed so I don’t have to ever shut the building down for one team. It’s everybody’s. We just drop down all the nets and go.”

Westfall said Lincoln will be hosting a high school indoor track meet next week, as well as the indoor state high school track, meet next month.

“The department of HHS (Health and Human Services) is giving us a limit of 450,” Westfall said. “So, we will do a Friday night pod of 450, a Saturday morning pod of 450 and a Saturday afternoon pod of 450. We’re talking 450 total, so the current plan is 325 kids, then coaches and spectators. So, it will be Friday, two sessions Saturday and youth kids on Sunday.”

“People have started calling, there’s districts around the state that are asking, ‘Hey, how did you do this?’” Westfall said.

Westfall said the facility is not necessarily to attract new kids to come to Lincoln, but keep students at the school and increase athletic participation.

“The first goal is recruiting our own kids, make sure they stay, get the participation numbers up,” Westfall said. “The lap track club has already started practicing. We have plans to add a baseball/softball travel organization in the next six months. Soccer training into a soccer club is coming in the next month or two.

“Our community ed programs are not going to just be youth sports. They are going to be youth sports and club travel, so we’re going to build that as we go because now we have an advantage because if being on a travel baseball team costs three grand, now I can make it cost-effective for Lincoln kids. We can absorb a lot of the costs and provide some of those organizations, that’s a big win.

“I come in here a couple of times a day for the last 90 days, half the time I just stare, look around and say, ‘Can you believe we did this?’ I’m like a little kid.”

The Wolgast Corporation in Saginaw handled construction for the project, which started in April with more than 50 workers. Work was shut down for eight weeks due to the pandemic.