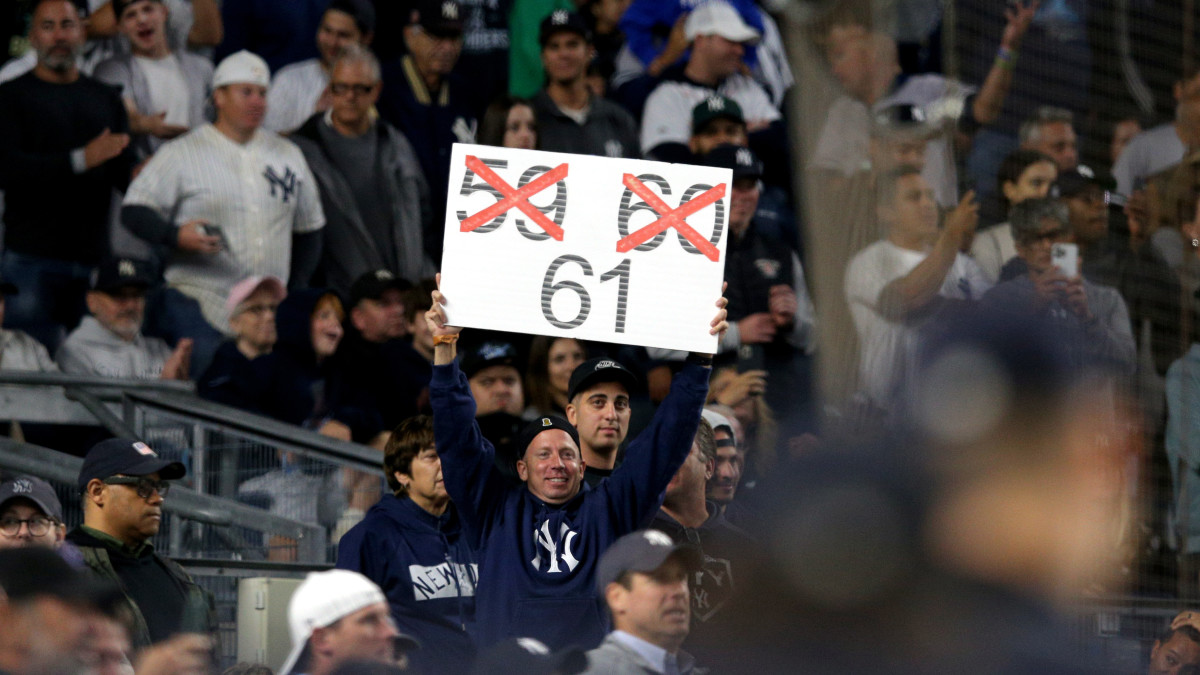 1. If you hate the Yankees, and I know many of you do, you will enjoy this story.

With Aaron Judge sitting at 60 home runs and chasing Roger Maris’s franchise and American League record of 61 home runs, fans wanting to see the Yankees slugger in action will have to tune into Friday night’s game via AppleTV+.

New York’s game against Boston will not air locally in the New York market. The game will be available nationally only via AppleTV+.

According to the New York Post’s Andrew Marchand, the Yankees aren’t satisfied with this. Marchand reports the Yankees have asked MLB and Apple to allow the YES Network to air the game locally in New York.

So far, Apple has said no. And good for Apple. Why should Apple, which paid MLB $85 million for the exclusive Friday-night package, give up its most anticipated game of the season just to help out the Yankees? The arrogance of the Yankees to even ask Apple to let YES air the game is not shocking, though.

These are the same greedy Yankees who have such disdain for their fans that they took 20 games that have aired on over-the-air free TV for decades and sold them to Amazon Prime Video, forcing their fans to pay to stream those 20 games, while said fans already pay for cable in order to get the YES Network.

It’s such a delicious twist that the Yankees, worth $7 billion, went for a totally unnecessary streaming money grab by selling 20 games to Prime Video and now might be losing their most valuable game in years to MLB’s streaming package.

It also shows that while everyone wants to tell you that streaming games is no different than watching games via cable, that’s clearly not true. The Yankees didn’t make an effort to get Thursday night’s game, which aired nationally on Fox, on the YES Network.

The Yankees know the audience for Friday night will be very limited.

YES has enjoyed massive ratings for their recent broadcasts as fans have tuned in to follow Judge’s home run bonanza,

And now the Yankees will miss out on drawing another massive audience Friday because YES doesn’t have the game.

But this isn’t about streaming or Apple TV+ or ratings. This is about the Yankees’ hypocrisy.

When they were taking Amazon Prime’s money and depriving fans of 20 free games, streaming was just dandy. But now that streaming is going to take away a game that would draw huge ratings on cable, the Yankees are trying to maneuver their way in.

Now, the Yankees will spin this with statements about trying to get Friday’s game on YES for the fans, but only a complete and total fool would believe them.

2. A lot of people thought Judge got No. 61 on Thursday night when he hit this shot.

One person who was not fooled, though, was legendary 84-year-old John Sterling, who called the fly ball perfectly from the second it left the bat on WFAN radio in New York.

3. “That may be meaningful to some of you.” Thank you, Al, for your sly gambling reference here.

4. Panthers running back Christian McCaffrey doesn’t want fans worrying about him being on the team’s injury report every week.

5. This is a few days old, but I just saw it this morning. Apparently, one Cowboys fans decided to celebrate last Sunday’s win against the Bengals by riding a horse into a Walmart.

Eisen, whose daily show recently headed to Roku, talks about recently re-signing for four years with the NFL Network, what his NFL Sunday schedule is like, what he would change about the NFL and what he currently loves in the NFL. Eisen also shares his opinion on the Monday Night Football overlap doubleheader, Amazon Prime’s presentation of Thursday Night Football and much more.

The podcast closes with the weekly “Traina Thoughts” segment with Sal Licata, from WFAN and SNY in New York. The week, Sal and I discuss DirecTV’s streaming issues during Week 2, Sal laments the fact that he had to miss a recent event and I read recent SI Media Podcast Apple reviews. We also give out our NFL Week 3 best bets

You can listen to the podcast below or download it on Apple, Spotify and Google.

You can also watch the SI Media Podcast on YouTube.

7. RANDOM VIDEO OF THE DAY: On this date in 1993, Jerry Seinfeld wore a puffy shirt on the Today Show.

Be sure to catch up on past editions of Traina Thoughts and check out the Sports Illustrated Media Podcast hosted by Jimmy Traina on Apple, Spotify or Google. You can also follow Jimmy on Twitter, Instagram and TikTok.