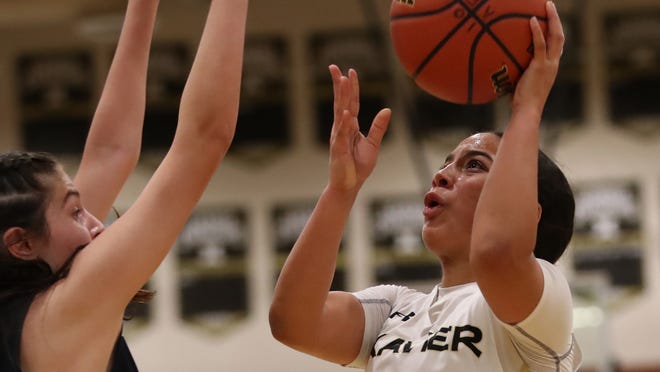 As February became March and outdoor high school sports were beginning to return to action in fits and starts, the outlook remained glum for indoor sports.

There was a real possibility that the squeaking of sneakers on hardwood would be a sound we wouldn’t hear again until November. But in the last three weeks, everything changed, and the end result was on display at Xavier Prep High School on Tuesday night — real live basketball games.

The Saints hosted Aquinas in a boys’ and girls’ basketball doubleheader, the first basketball games or indoor sports of any sort since the pandemic began last March.

“It was surreal, to be honest. Kind of like a foggy blur,” said Thaddis Bosley, the Saints’ girls’ coach, who this year is also coaching the boys’ team. “I know for the players and for myself too, there was definitely a time when it was like ‘This is never going to happen.’ So to be back out there, you really just feel thankful and appreciative.”

The return to play for indoor sports like basketball and wrestling became possible when the CIF — thanks to pressure from a lawsuit and advocacy groups — lessened the severity of its restrictions. Originally, counties had to be in the yellow tier, which meant only 1 coronavirus case per 100,000 residents, before basketball could be played.

But the CIF relented and said indoor sports could happen if they were held to the same high standard of testing and protocols used for college and pro basketball teams in the state. That means more frequent testing, and fan restrictions, that outdoor high school sports like football and soccer don’t have to contend with.

All the players and coaches on both the Aquinas and Xavier Prep boys’ and girls’ teams were tested Monday and got the results back Tuesday. No one tested positive.

“Yeah, we all got tested yesterday, and it’s kind of wild to have to be tested just to play a basketball game, but it went fine, and we’re happy to do it,” said Saints senior Maliyah Bosley, before adding with a laugh. “And luckily it wasn’t the nose kind, so that was nice.”

The stands were completely empty, not even parents were allowed, though the games were live-streamed. Coaches and players not in the game wore masks.

“Having no fans played a big role,” she said. “We had to sort of have our coaches and ourselves be the ones to get us hyped up instead. But off the tip, it was a little nerve-wracking, but once halftime rolled around it started to feel normal again. Just basketball.”

The Saints, a private school that is not part of a school district, were the first desert team to play basketball but others may follow soon. The four Desert Sands Unified School District high schools — Palm Desert, La Quinta, Indio and Shadow Hills — all began practicing this week and could play non-league games as early as next week.

While nothing is official, Palm Springs Unified School District schools are expecting to begin practice April 12 after the district’s spring break. Coachella Valley Unified schools are also still working out a plan.

According to Bosley, a hypothetical Desert Empire League schedule is in place and would begin the week of April 19 if all goes well. It also appears that a basketball postseason is in the cards, too. The CIF-SS will make a final decision on that on April 13, but all signs point to playoff basketball later this year, too.

But that’s in the future, and if we’ve learned anything this year, it’s that you can’t plan too far ahead.

But Tuesday night, things were back to semi-normal. The recognizable sounds of basketball — sneaker squeaks, a dribbled ball hitting the wood, the swish of the net, players calling out screens — were all resonating around the Xavier Prep gym again.

“A month ago it felt like we were never going to play again,” Maliyah said. “To hear that we were going to be playing felt really good. And to actually get out there … I was a little out of shape, but it felt good to be back out there with the team.”

For the record, the Saints’ boys’ team got walloped 83-28 by the talented visitors from San Bernardino. It was the first game as boys’ head coach for Bosley and none of the players had much varsity experience.

“We’re playing with house money,” Bosley said. “It’s an odd season, and no one is expecting much of us. Just got to get out there and learn the game, and get better. I don’t think anyone on the team has played in a varsity game, so this is going to be a valuable year. We’re going to learn a lot this year.”

The Saints’ girls’ team on the other hand is loaded with returning varsity talent and it showed.

Xavier Prep beat Aquinas 68-14. The Saints were led by Genna Wienecke, one of the most talented players in the desert. She had 20 points, seven rebounds, seven assists and two blocks. Freshman Dejah Saldivar added 17 points, including five 3-pointers.