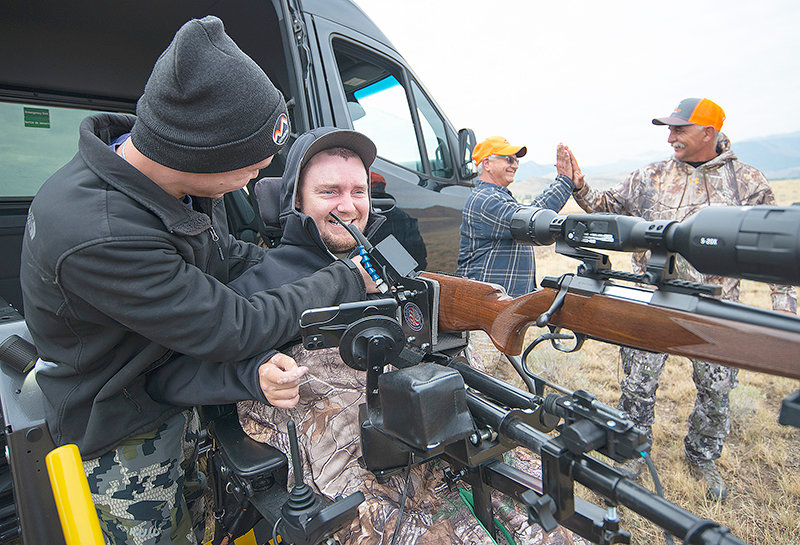 After waiting years for a chance to harvest a big game animal, Dylan Lessleyoung was stunned by how quickly his pronghorn hunt progressed from saddling up to harvesting a beautiful buck.

“It went so fast,” he said after taking a perfect shot in the foothills near Meeteetse.

It took nine years for the South Dakota man to realize his dream. While the morning hunt was quick, it took many years of doggedly pursuing the right equipment to allow him the opportunity with his disability.

Simply getting Lessleyoung dressed in the morning takes more time than most. He’s a quadriplegic, yet that hasn’t halted his love affair with the great outdoors or the thrill of the hunt.

It wasn’t until he came to the Cowboy State as a guest of Wyoming Disabled Hunters that it was a possibility.

The athlete had hunted birds prior to the near-fatal automobile accident that broke his neck. He was young, just out of high school and had yet to dedicate the time needed for serious hunting between sports and the typical amusements of youth. After his accident, Lessleyoung worried he would never hunt again.

His high school football team had won back-to-back state championships in 2011 and 2012, with a combined record of 82-0. The tight end was devoted to teammates and friends — seemingly an all-American story with a trajectory of future success.

However, few lives are as rosy as they seem.

His life, as most are, was complicated. To start with, it isn’t accurate to call the wreck that cost him the use of his body below the neck an accident.

“My car accident was actually a suicide attempt,” Lessleyoung said the night before his big adventure. “I was 18 years old and found myself in a very dark place. I thought it was the only way out.”

Police reports state Lessleyoung was heading home from the Mitchell Technical Institute to his home town of Dell Rapids. He wasn’t wearing a seatbelt and was ejected from the vehicle. Alcohol was suspected of being a factor in the one-car crash.

He was distraught after a friend killed himself in a very public way. Afterwards, he found himself alone after a break up.

“It was over a girl,” said Lessleyoung’s stepfather, Trent Fischer. “It was a permanent solution to a temporary problem.”

Growing up in a single-parent home, he was expected to be the man of the house from a young age in a state that expects men be western strong. Fischer didn’t come into his life until shortly after his accident.

It wasn’t until Lessleyoung was paralyzed that he started to
understand his feelings.

“Through the years after the accident I’ve learned it’s OK to open up and reach out to people. And it’s OK to cry,” he said.

He now carries his heart on his sleeve and seeks out new opportunities to help those finding themselves in a dark place, afraid to share their feelings. He’s an important voice at a time that sees far too many suicides among our youth.

A NEW LEASE ON LIFE

Suicide is the second-leading cause of death among people age 15 to 24 in the U.S. Nearly 20% of high school students report serious thoughts of suicide and 9% have made an attempt to take their lives, according to the National Alliance on Mental Illness.

Lessleyoung now has a Facebook group called “Wheelchair Adventures.”  His goal is to provide inspiration and information for wheelchair users and hopes to assist people with disabilities to have outdoor opportunities, knowing first-hand its healing properties.

He understands the healing nature of the outdoors, especially for those needing a hand up. He wants to use his unintentional education in disabilities to help others experience the peace of a sunrise or the feel of a fish on the end of a line.

He applied to be part of this year’s Wyoming Disabled Hunters outing, and after scoring the non-resident “antelope” tag, was invited to join the group. Initially fully paralyzed from the neck down, Lessleyoung is now able to move his right shoulder and use his right arm with limitations.

Only about one-fifth of those applying for the program are able to join the staff of the non-profit group on the specially guided hunts. The process is a year long effort by dedicated volunteers who serve to make the hunting opportunities possible.

“These people give their heart and soul every year,” said board member Marvin Blakesly.

You could hear the respect he has for his fellow volunteers as his voice was choked by emotion.

“We have nine board members and they work around the clock every year to make this happen for our hunters,” he said.

There’s a lot of moving parts that people don’t often see; from landowners to companion hunters, cooks, lodging, meat processors, taxidermists and those willing to be persistent in the special logistics required to make a hunt successful for those with life-altering disabilities. They’re all volunteers.

“When it all finally comes together and you see the smiles on [the hunter’s] faces, it makes it all worthwhile,” he said.

Organization vice-president Bryce Fauskee, who has been a volunteer and board member with the group since its inception, said hunting “is good for the soul.”

“You get out and make new friends and interact with the wildlife. And there’s nothing like that feeling when you’re just about to take that shot.”

Fauskee said without nonprofit organizations like Wyoming Disabled Hunters, who invite hunters to apply from around the country, those with disabilities may never have a chance to experience outdoor sports.

“Logistics can be really tough for hunters with disabilities, so it’s great to have programs out there that can help them get it done,” he said.

Born with myelomeningocele spina bifida, Fauskee could have qualified for one of the group’s hunts, but used his talents afield and in the office as a volunteer instead.

Brought up in a family with deep respect for the great outdoors, Fauskee has never allowed his disability to get in the way of a good hunt or backcountry horseback ride. He’s been the program manager for the Wyoming Services for Independent Living transportation program for the past 15 years and a volunteer for the group for 14 years.

His parents, Bonnie and Bruce Fauskee also volunteer for the organization.

Lessleyoung had moments of panic once in Wyoming. His special gear was acting up while trying to zero in his .243 rifle and scope. He uses a mount from a company called Be Adaptive. It allows him to aim his weapon using a joystick with his chin. He is only able to pull the trigger with a device called a “sip and puff trigger.” His scope connects to his phone through Bluetooth and temporarily attached to his chair.

Be Adaptive’s goal is to help physically challenged people get back into doing the activities they love, like hunting, shooting, fishing, archery and photography. The company designs and manufactures activity trays, shooting rests for rifles, shotguns, pistols, crossbows, and compound bows, adaptive fishing equipment, hand controls and lifts for ATV’s and much more.

The team at Wyoming Disabled Hunters is familiar with the technology and has equipment, thanks to generous donors, that makes getting those confined to a wheelchair into the backcountry. But back home, Lessleyoung hasn’t found them to be commonly available. He wants to change that, taking what he has learned in Wyoming back to his home state.

“I would love to eventually set something like this up at home,’” he said. “Right now the main goal is just to show people the adaptive equipment that’s out there. A lot of people don’t even know this equipment is available for them or can’t afford it.”

Wyoming Disabled Hunters is seeking volunteers for their program. There are many positions needed, especially hunting companions, said Terry Skinner, president for the group.

Several entities have helped acquire the specialty equipment needed to host the hunts. Alpine Medical in Powell recently donated a Hoyer lift to allow a person to be lifted and transferred with a minimum of physical effort. The Paul Stock Foundation, Park County Recreation Board and Wyoming Outdoorsmen also have been important contributors.

For more information on volunteering or to make a donation, visit wyomingdisabledhunters.org.

Demand for outdoor winter activities grew during the pandemic, and it isn’t expected to decrease anytime soon