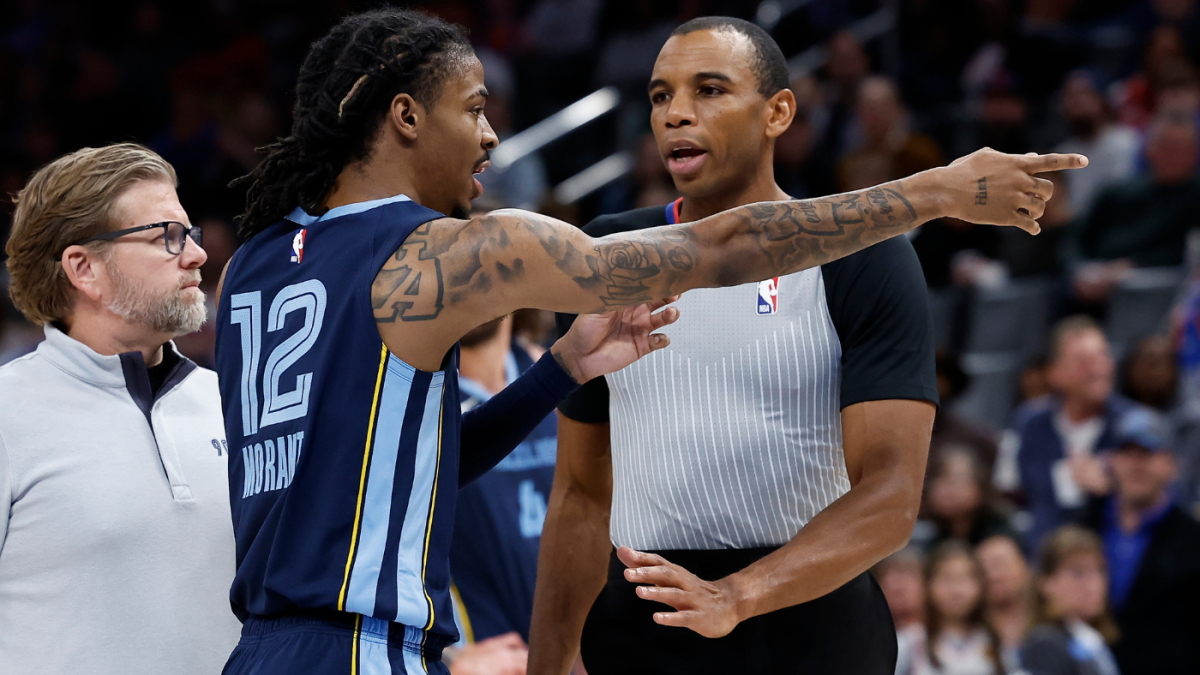 Here’s a little holiday-season inspired advice for the NBA, which, it seems, can clearly use it: You’re entering a transition from one era of stars that defined the game to another, and you better start embracing and supporting that crop of young players that will define the next decade of basketball.

Enter, as example No. 1, Ja Morant and his absurd ejection over the weekend.

On Saturday, Morant, one of the game’s most exciting players and the leader of a Memphis Grizzlies team that sits atop the Western Conference, was unceremoniously ejected from the game before the first half had even finished.

This is ridiculous. Stupid. Self-defeating. And utterly counter to how the NBA has always worked for its stars, of which Morant is certainly one.

The official explanation for his early exit: That Morant was ejected for making derogatory comments about the officials to fans sitting courtside at the game.

The real reason: The officials put their own ego and self-regard before what’s best for the game — which, in truth, is totally tied to stars like Morant.

The rules have always been different for those players than some last man of the bench, and it’s farcical to think current and former greats like LeBron James, Kobe Bryant or Michael Jordan would have received a single technical foul in this situation. Let alone two. Let alone the second so early in the game.

Sit close enough at a game, like the people Morant was talking to, and you’ll hear stars like LeBron, or Chris Paul, or Kevin Durant “working” the officials aggressively. The rules are different for them. They should be for the next wave of stars as well.

“I got my first tech for saying I got hit in my f—— face. Didn’t curse at him,” Morant told reporters after the game, a 115-109 loss to the Oklahoma City Thunder. “Another situation where he’s in my conversation and I get another tech for talking with a fan. I feel like when these fans came here, went online to buy these tickets, they didn’t say Ray [Acosta’s] name to come watch.”

The NBA is in transition, one both promising and perilous for the sport. On the one hand, there is a deep bumper crop of burgeoning and already-developed superstars — Morant, Zion Williamson, Jayson Tatum, Luka Doncic, Trae Young, and many, many more. Throw in the mid-career stars like Giannis Antetokounmpo, Nikola Jokic, Joel Embiid and others, and you have a healthy group of players to sell to the public as today’s faces of the league.

On the other hand, the NBA has not always swiftly and successfully navigated these moments. Michael Jordan’s final departure from the game left a gaping hole, and the same is still possible now.

LeBron James turns 38 on Dec. 30, and the latest injury to Anthony Davis means he’s saddled with a Lakers team that he may not be able to carry in the same way he would’ve been able to years ago. Steph Curry, who’ll turn 35 in March, is injured, and his Warriors squad appears to be a lesser version of what he once had at his disposal. Subtract those players from the playoffs or even a deep postseason run, and other lights will have to shine in their place.

It’s worth remembering that 11 of the past 12 NBA Finals have included LeBron James, Steph Curry or both. That cannot last forever. It may not even happen again.

Other greats, players who have been there, could be fading as well.

Kevin Durant and the Nets are playing blazingly great basketball, but their likelihood for success this season — let alone in seasons ahead — is anyone’s guess. Chris Paul’s Suns are excellent, but he finally looks his age, and he’s already been hurt for a large chunk of time earlier this year.

So the future is barreling down, and the notion that a mid-market NBA Finals between, say, the Grizzlies and the Bucks will be a rating extravaganza is far from certain. The league can’t just rely on the hope that another singular player will step up and command the dominance and accompanying attention that Magic and Bird and Jordan and Kobe and LeBron created.

Giannis could. Maybe Tatum and the Celtics take that step.

But it’s much more likely that the next 10 years will feature more balance, just as the league has been aiming for with its tweaks to the CBA, and the NBA Finals will feature a vast assortment of stars and teams. That reality would require a robust investment in building the brands of a wider range of stars rather than the game’s elite players who have dominated the past for large swaths of time.

Morant’s abysmally misplaced ejection, then, has meaning beyond a single game in Oklahoma City. Preventing officials from taking the reins of the game in a way that undercuts, as Mortant pointedly put it, why fans buy tickets or tune into the game in the first place is key.

Here’s the unspoken truth someone in the league office needs to speak out loud and harshly to its officials: The rules are always different for top talent — even if that chafes at the very human frustration of having to acknowledge most of us aren’t as special as the special few.

But the fact is that stars need to shine, and the absurdity of a ref feeling comfortable booting Morant from that game speaks to a much bigger disconnect than what happened in one game.

The future of the NBA rests with its future greats. Talent matters. There’s already enough that can take the shine off potential superstars — injury, failure, ego, pressure — for the NBA to let human error enter into the picture and let Morant’s ejection go unnoticed.

NBA officials don’t need to hear — or react — to everything. Steal your ears to criticism. Except the fact that competitive men are going to act out of frustration and, at times, they may hurt your ever-so-sensitive feelings. That’s the price of officiating stars, rather than being one.

So let Morant play. Give his young contemporaries room to roam. And understand — in ways big and small — that some of these guys are the league’s future. If only the league won’t get in the way.