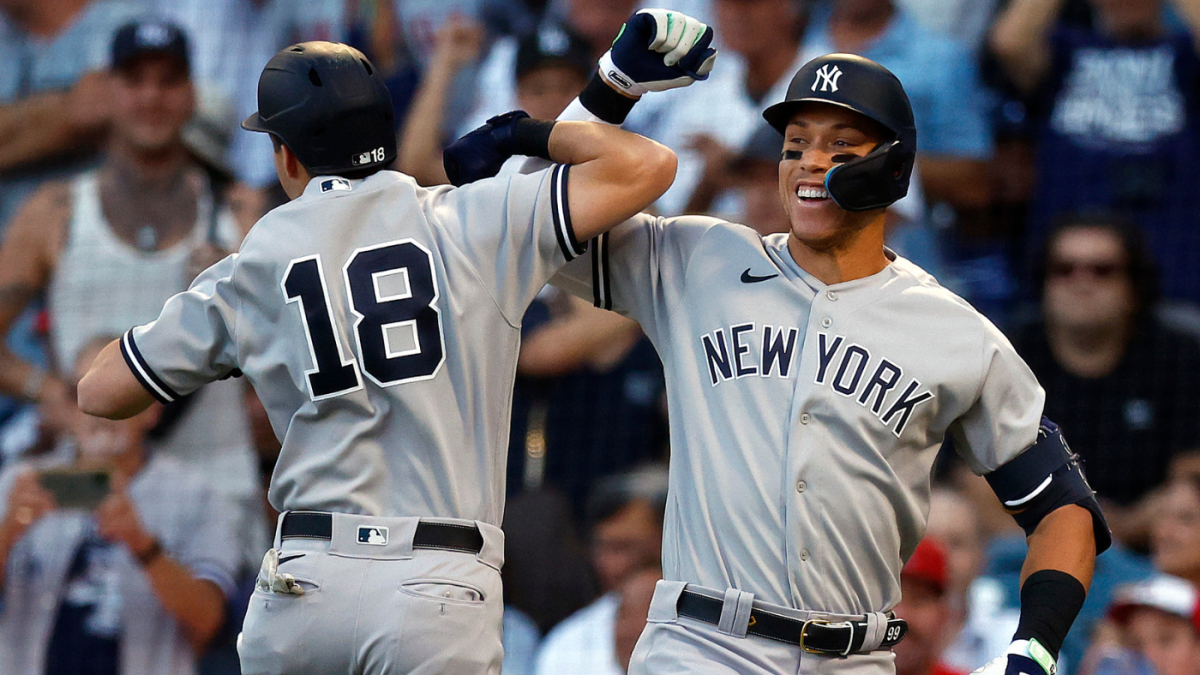 In the end, Aaron Judge wanted to finish his career with the New York Yankees more than join his hometown-ish San Francisco Giants. Judge has agreed to remain with the Yankees on a massive nine-year, $360 million contract. He reportedly turned down a similar offer from the Giants, and the San Diego Padres were a late entrant in the Judge sweepstakes as well.

The $360 million contract is the largest free agent contract in history, and Judge joins Max Scherzer and Justin Verlander (both $43.3 million per year) as the only players in the sport with a $40 million average annual salary. Judge rejected a seven-year extension worth $213.5 million in spring training and made himself another $146.5 million with his historic 62-homer AL MVP season.

With Judge back in the fold, the Yankees can now move on to other offseason matters. To date this winter they’ve re-signed Judge, re-signed Anthony Rizzo, and signed Tommy Kahnle. For all intents and purposes all they’ve done so far is reassemble the 2022 team. Now they have to add pieces as they look to get over the hump and win a championship with Judge.

FanGraphs estimates New York’s 2023 competitive balance payroll at $266.5 million with Judge. That is in line with their franchise record $267 million payroll in 2022, so either the Yankees will raise payroll considerably next year, or they’re going to salary dump players/go cheap the rest of the offseason. Either way, here are the three major items remaining on New York’s hot stove to-do list.

The Yankees are set in right (Judge) and center (Harrison Bader), but left field is wide open. They started nine different players in left in 2022, including three players at least 30 times each, and they started three different players in left in their nine postseason games. One of them, Oswaldo Cabrera, is a natural infielder (Aaron Hicks and Giancarlo Stanton were the other two).

Andrew Benintendi’s wrist surgery sent the Yankees into scramble mode in left field late in the season and he remains available as a free agent. The Yankees are said to have interest in a reunion. Here, according to FanGraphs projected 2023 WAR, are the top unsigned free agent outfielders:

Not included in that list is Japanese star Masataka Yoshida, who was posted for MLB teams earlier this week. He’s a high-contact lefty bat who draws lots of walks, but has limited power and defensive skills. Otherwise Drury is a super utility guy more than an outfielder and Conforto missed 2022 with shoulder surgery, so the outfield market thins out real quick.

Pittsburgh Pirates All-Star Bryan Reynolds requested a trade earlier this week, and while the team is under no obligation to trade him, the Buccos will be overwhelmed with trade calls. The Yankees have had interest in Reynolds in the past and do again now. It’ll cost a lot to get him, but quality switch-hitters with strong defensive chops and three years of control are worth acquiring.

Point is, left field is a glaring need for the Yankees right now, particularly with Hicks more likely to be salary dumped than given a starting spot in 2023 given his poor 2022 season. Ideally the Yankees would add a lefty swinger with high-end contact ability like Benintendi or Yoshida. That would address their greatest offensive need.

2. Bring in another starter

Despite playing home games in homer-happy Yankee Stadium, Yankees starters ranked fifth in baseball with a 3.70 ERA and seventh with 28.1 WAR the last two seasons. Their rotation has been above-average the last two years, but there’s always room for improvement, and they did just lose the steady if unspectacular Jameson Taillon to free agency. He has a four-year deal with the Chicago Cubs.

New York has been connected to free agent southpaw Carlos Rodón, the best unsigned starter, throughout the offseason. That interest persists even with Judge back at huge dollars:

Rodón is said to be seeking a six-year contract worth $180 million according to the New York Post, and given the pitching contracts we’ve seen handed out this offseason, that is in no way unreasonable. New York already has one $30-plus-million a year starter on the books (Gerrit Cole), but these are the Yankees. Of course they can afford another one.

Chris Bassitt and former Yankee Nathan Eovaldi are the best remaining free agent starters behind Rodón. The Miami Marlins are said to be willing to trade anyone other than reigning NL Cy Young winner Sandy Alcantara, and righty Pablo López has interested the Yankees in the past. In fact, the two teams came close to a trade involving Lopez and Gleyber Torres at the deadline.

At the moment the Yankees have All-Star and breakout lefty Nestor Cortes, Luis Severino, and Frankie Montas slotted in behind Cole in the rotation. Domingo Germán and Clarke Schmidt are candidates for the No. 5 spot. New York doesn’t absolutely need to add another starter, but that No. 5 spot can be upgraded, and after giving Judge that contract, why would you skimp on pitching?

3. Figure out the left side of the infield

After the lockout the Yankees swung a five-player trade with the Minnesota Twins that sent shortstop Isiah Kiner-Falefa and third baseman Josh Donaldson to the Bronx. Give the Yankees a truth serum and I’m certain they’d tell you they’d like to have that one back. Kiner-Falefa played erratic defense and didn’t hit much in 2022 (and got benched in the postseason), and Donaldson started to show his age at that plate. That means the left side of the infield is a question right now.

This is not a crisis situation because the Yankees have two premium shortstop prospects in Oswald Peraza and Anthony Volpe. Peraza debuted in September and saw some action in the postseason, and Volpe reached Triple-A in 2022. Our R.J. Anderson ranked him the No. 12 prospect in baseball last month. Here’s his write-up:

Volpe enjoyed a breakout 2021 season, homering 27 times after adding muscle to his frame. He didn’t match that performance last season — he outright struggled during a 22-game introduction to Triple-A, striking out 30 percent of the time — thereby delaying his debut until sometime next summer. Volpe still projects as an above-average hitter who can contribute in each of the slash line categories. Defensively, he’ll have to continue to prove that he can make all the plays at short despite a substandard arm. It’s possible that he’ll eventually end up at the keystone.

Donaldson is owed $29 million in 2023 between his salary and club option buyout and unloading even part of that won’t be easy. Kiner-Falefa is owed $6 million next season and would be a pricey utility man, but keeping him would make sense. Donaldson is at risk of further age-related decline, the prospects are suspects until proven otherwise, and DJ LeMahieu is rehabbing a foot injury this offseason in hopes of avoiding surgery.

Unless the Yankees intend to spend big for one of the remaining free agent shortstops (Xander Bogaerts, Carlos Correa, Dansby Swanson) or swing an unexpected trade for someone like, say, Luis Arraez or Yandy Díaz, they’ll probably stand pat on the infield. They then must decide whether to stick with the Donaldson and Kiner-Falefa tandem, or give the kids (including Cabrera) an extended look. Either way, a decision needs to be made about the left side of the infield.

Re-signing Judge was priority No. 1 for the Yankees this offseason and now that that’s out of the way, they can move on to other matters and focus on improving the team. Left field is a glaring need and adding another starting pitcher is never a bad idea. The left side of the infield needs work too, though the Yankees do have good internal options there. Judge getting back was an important offseason goal. Now the Yankees have to improve the roster around him.