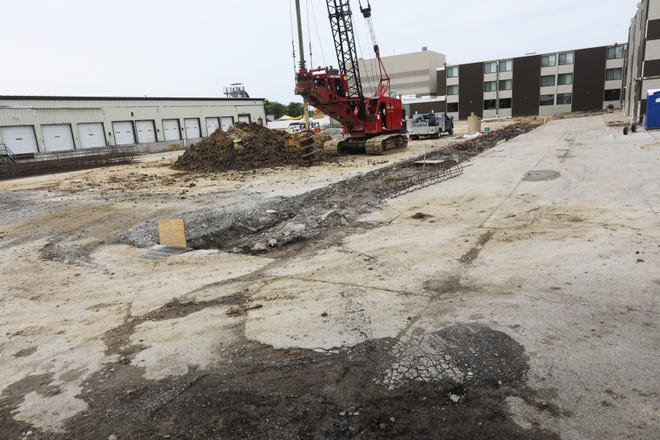 Construction of a long-awaited indoor basketball, volleyball and pickelball court facility alongside FunCity Resort has begun.

The Courts, the second and final phase of a project aimed at increasing sports tourism, health fitness and athletic activities in the Burlington area, will be built in the southeast parking lot of FunCity Resort between the Winegard building.

According to a building permit approved in April by the Burlington Development Department, the 26,000-square-foot building will include three collegiate-sized basketball courts that will allow for up to six volleyball courts.

It also will house a 10,000-square-foot multi-use area that can be used for pickleball courts, as well as men and women’s restrooms.

The space also will be able to host volleyball games, racquet-sports, wrestling, events, and other community activities.

A ramp will connect The Courts to the FunCity Resort building, and about 3,400 square feet of current hotel space will be remodeled to allow for team rooms and office and storage space.

According to the building permit, construction is expected to cost an estimated $4.3 million. Thus far, $6.1 million has been raised for the project.

Leading the charge on fundraising and design is a group of community and business leaders from Great River Entertainment, Southeastern Community College, Winegard Co., the Greater Burlington Partnership, Great River Health, and others.

The Courts will be managed by the Greater Burlington Area Sports Facilities, a non-profit led by Southeastern Community College President Michael Ash, who also serves as president of the GBASF Board of Directors, and Andrew Ryerson, who is the current general manager of the FunCity Turf.

“The project, which will be an expansion/addition at the FunCity Resort complex, will allow us the ability to host numerous types of indoor sporting activity, such as basketball, volleyball, badminton, pickleball, indoor tennis, dodgeball, futsal as well as many other types of indoor activity and events,” Ryerson previously told The Hawk Eye. “We are excited with the prospect of having a facility which can be available for year-round activity and which is also super conveniently located at a complex in which participants are a short indoor walk to their hotel room, to places to eat, to areas to hang out in-between games, to play at the FunCity Arcadium, bowl at KingPins or enjoy Huck’s Harbor Water Park.”

Ryerson believes the location of The Courts will be a selling point for tournaments due to its close and convenient proximity to lodging and entertainment amenities.

The idea for both The Courts and The Turf, which houses indoor soccer fields and was completed in February 2019 across the street from the RecPlex, first was conceived in 2011 after the Imagine Campaign received more than 1,800 ideas on how to improve the Burlington area.

Among those ideas was an indoor recreational complex. Over time, it was decided that it would be more cost-effective to erect the two components of the facility — soccer fields and basketball courts — in separate locations.

While work on The Courts already is underway, a ground-breaking ceremony will be held at 10 a.m. June 8, featuring a ceremonial first dig and brief comments by individuals and organizations that helped make the project possible.

Members of the public are invited.

The Courts is expected to be complete by July 2023, Burlington residents and visitors to the area will be able to enjoy the reopening of FunCity’s Ballocity, as well as a new indoor water feature and the new Ninja Extreme course, early next year.