What does ESPN’s new deal to air NHL games mean for viewers? 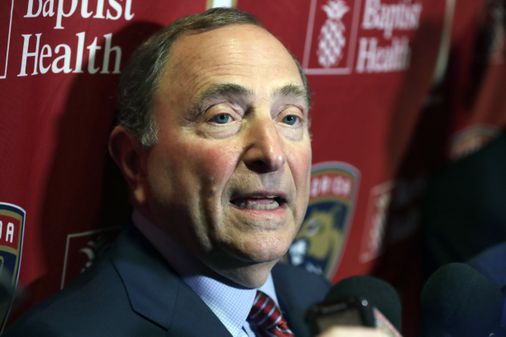 Neither ESPN nor the NHL would confirm the financial terms of the deal, but Sports Business Journal reported it was for $400 million per year, or a total of $2.8 billion.

“This is a transformative time in media,” said NHL commissioner Gary Bettman in a conference call with ESPN president Jimmy Pitaro and several reporters, “especially sports media. Our new partnership harnesses the power of Walt Disney Company and its multitude of platforms. It puts us on the cutting edge of content distribution, with a great linear package [on television] focusing on the regular-season schedule, as well as a forward-looking strategy focusing on the impact of streaming.

ESPN and ABC are not the only networks in the league’s next rights agreement. NBC, which won the broadcast rights in 2005, is in the final season of a 10-year, $2 billion deal. NBC is bidding for the remainder of the new deal, including three Stanley Cup Finals over the next seven years. Half of the Stanley Cup playoffs will air on ESPN/ABC, with the other half going to the other rights holder. Fox is also expected to be in the running.

“We decided we would focus on this deal and structuring it before we focused on the [second part of the] deal, because we wanted to make sure that we were crafting a package that made sense for ESPN,” said Bettman, who said he expects the NHL will begin responding to proposals for the remaining package over the next few weeks.

This deal locks down the most desirable part of the overall broadcast package for ESPN and ABC. Much of the new deal is conventional. ESPN or ABC will air one conference final each year, and gets priority on the choice, which it will make after the second round of the playoffs. Twenty-five regular-season games will air over the two networks.

There also is the likelihood ESPN will do some type of megacast broadcast across multiple networks, as it does for other major sporting events like the college football playoff. ESPN and ABC also get rights to opening-night games and the All-Star Game.

The innovative aspect comes in how broadly the games will be distributed across streaming services. ESPN+ will stream more than 1,100 games, and also has the rights to simulcast the Stanley Cup Final. The NHL’s out-of-market streaming package was previously the domain of NHL.TV, but will now be available only to ESPN+ subscribers.

“Streaming really is at the heart of this deal,” said Pitaro, who revealed that when he took over as ESPN president three years ago he already knew he wanted to pursue reacquiring NHL rights, in part because of its comparatively young demographics. “This is a reflection of it [being] a critical part of our future.”

Also, ESPN+ and Hulu — which will use the ESPN broadcasts on its streaming platform — will feature 75 exclusive-rights national games. That means that if the Bruins are slated to appear in a game streaming exclusively on ESPN+ or Hulu, the only way for fans in the Boston market to watch it will be on one of those streaming services.

ESPN’s history with the NHL is long, but has waned in recent years while NBC held the rights. ESPN first aired an NHL game in 1979, approximately three months after the network launched. It held national NHL rights from 1985-88 and again from 1992-2004.

NBC has been the United States television home of the NHL since 2005. But it is eliminating its cable sports outlet NBC Sports Network — which carried the majority of its live broadcasts — by the end of this year to prioritize its Peacock streaming service. Many of NBCSN’s events will move to the USA Network.

Bettman said progress on the deal with ESPN accelerated over the past couple of months. While he was complimentary of the longtime partnership with NBC — which still could remain in effect in the second phase of the rights deal — he acknowledged there’s some satisfaction in knowing that NHL games will air on ESPN again.

“Who knows if things might have been different,” said Bettman, when asked if he thought ESPN’s NHL coverage would have been more thorough in recent years had it been the rights-holder. “I will say that over the last 15 years our viewership has grown significantly, which counters a trend over that timeline for most sports. I will say that we’re still talking to them and NBC did a terrific job in growing the profile of the game.

“But I will acknowledge that while ESPN covered us on a regular basis with great talent, had a presence during the playoffs … my guess is that it’s only human nature that there would have been more attention to the properties that they had rights to than on us. I’m well aware of their ability to promote and market and reach more sports fans than anybody else, and I think that is going to continue our growth and was an extraordinarily important part of us coming together on this venture.”