What Air Raid? Takeaways from USC’s win over Fresno State 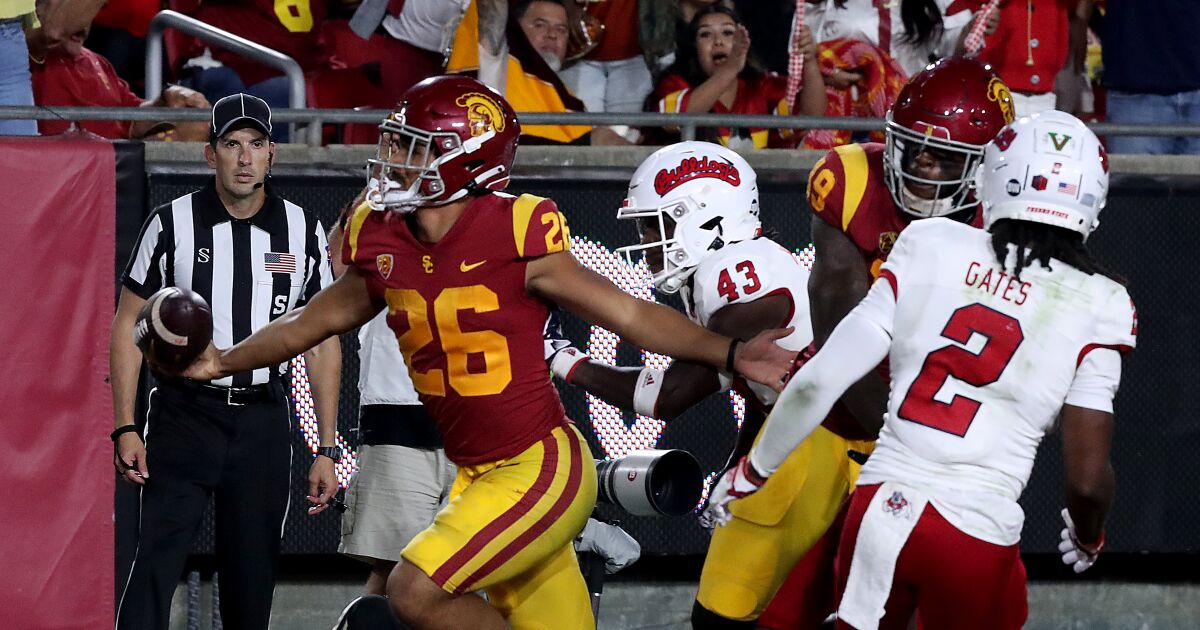 But this USC team can top all those Oregon exploits, the running back said.

Dye, a transfer from Oregon, doubled down Saturday night on his claim that this team is “the best team I’ve ever been on.” After the Trojans beat Fresno State 45-17 at the Coliseum, Dye said he’s “never played on a team like this before.” When asked what made the Trojans’ collection of big-name transfers tossed together by a new coaching staff different, he pointed to the group’s selflessness.

The Trojans are off to a blistering start with 152 points scored during three games, the most for a USC team in the first three games of a season since 2005. Most came through the air against Rice and Stanford, but the running game led the Trojans into the end zone Saturday.

Austin Jones and Dye had 110 and 102 rushing yards, respectively, and each scored a rushing touchdown. Dye also added 36 receiving yards on three catches.

While Riley’s offenses at Oklahoma were renowned for exceptional quarterbacks and talented receivers, the coach stressed to the transfer running backs how big their role would be at USC.

“He said, you know, the way you win games is with a strong run game,” Jones said. “We’re not just going to go out here and be just a one-dimensional offense. As you can see tonight, we put that on display.”

The Trojans used their grinding run game to put together methodical drives of 12, 12 and 15 plays to open the game. Each one ended in a touchdown. Relying more on its explosive passing attack in the first two games, USC had only two drives of more than nine plays against Rice and Stanford.

Get a QB who can do both

Caleb Williams may have had the worst passing game of his young USC career — a relatively mundane 25-of-37 passing for 284 yards and two touchdowns — but added the first rushing touchdowns of his USC career and finished with two scores on the ground. He scored on an eight-yard keeper in the first quarter and a one-yard quarterback sneak during which he lined up under center.

The quarterback proved his dual-threat ability with smart carries during critical moments, converting two fourth downs with his legs. He rushed for five yards on fourth-and-two in the first quarter and 11 yards on fourth-and-one in the second. The Trojans were three for three on fourth-down conversions Saturday.

“I try not to use my legs, but that is an ability that I have,” Williams said. “I want to stand back there, I want to deliver. I want to be, as we always say, the best mailman, the best delivery man back there in the world, and I just had opportunities.”

Williams had 79 carries for 442 rushing yards and six touchdowns at Oklahoma last season, but Saturday’s rushing totals got weighed down by three sacks for a loss of 29 yards, which count against rushing yards in college as opposed to NFL, which deducts lost sack yardage from the passing yard total. Williams finished with just one net rushing yard on 12 carries.

Two weeks ago, Solomon Byrd played five snaps against Rice. The former starter at Wyoming was languishing with the third-stringers at USC.

After Saturday’s win, he received the game ball.

Byrd forced and recovered a fumble on a strip sack of Fresno State quarterback Jake Haener that helped USC turn momentum in its favor during the third quarter. Byrd had four tackles, including two for loss, against Fresno State, in addition to forcing USC’s 10th takeaway of the season.

“That’s what we’re trying to build — a guy who, in the first game of the season, takes five reps and is a three, gets an opportunity, keeps working, and now, look at him,” Riley said. “Now, he’s a starter.”

The 6-foot-4 Palmdale native had 87 tackles and 10 sacks in three seasons at Wyoming. He made seven starts, including six last season, before transferring to USC. He said making the adjustment from starter to backup’s backup was difficult, but the fact he could rise so quickly at USC shows the team’s depth under Riley.