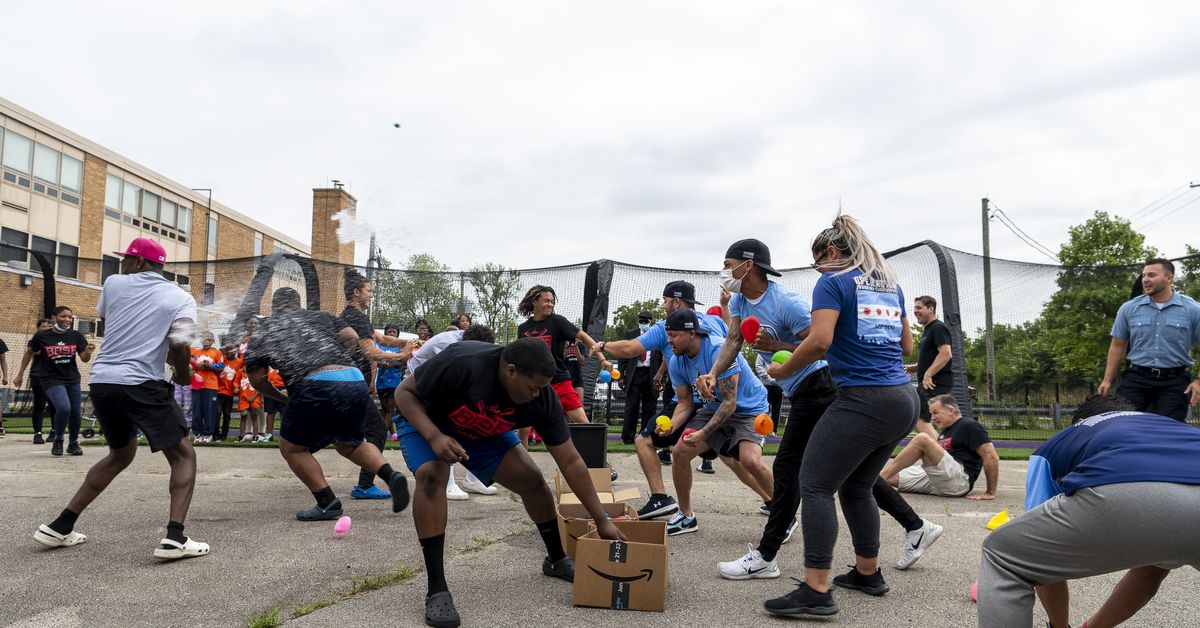 James Solis stood in the parking lot of a shuttered Chicago Public School drenched in water, trying to catch his breath.

The recent high school graduate, along with other West Side kids, some as young as 6, was in a massive water balloon fight Friday afternoon, but they weren’t targeting each other. Instead, their opponents were nearly a dozen Chicago police officers.

“I think this kind of helps make the relationship better because there is a lot of head butting with people in authority and young kids like ourselves,” Solis said. “It gets us to a common ground that not all police are bad and not all kids are bad — really we just want to help each other out.”

For the last four years, Solis has participated in The BASE Chicago, which helps young people improve their academic prowess through sports. He credits the organization with getting him through a difficult time when his father died. The BASE, he said, put him on a path to play baseball for Loras College in Dubuque, Iowa, starting this fall.

The BASE Chicago organized the water balloon fight with the Chicago Police Knights Baseball Club — a team made up with active police officers — and the Westside Ministers Collaborative. Kids enrolled in programs at nearby Tilton Park also took part, showing up at the parking lot in the 200 block of North Kolmar Street in West Garfield Park.

Solis said officers from the Knights have become a staple in the organization; now, rather than be scared of police in the community, he sees them as friends and mentors.

Frank Brim, executive director of The BASE Chicago, said the water fight was a way to help normalize relations with the police and also humanize the young people from the West Side.

“A lot of times kids in this ZIP code have been known for being what some considered bad kids and we want to introduce our kids as great kids doing some great things who have phenomenal parents,” Brim said. “We also have the police officers and some of our kids feel a certain way about them, so this is an opportunity to get them engaged.”

Solis said he knows firsthand how important it is for police to show young people like him that they care about the community.

Eric Bermudez, a Chicago police officer, said the water fight was fun, but more importantly, events like this are essential to building trust.

“It’s an amazing feeling to get out here into the community in a positive and safe environment with our youth to show them we are out here for them and we care,” Bermudez said. “This kind of thing is essential; in order to effect change, you got to go out and make change. We are out here and we care.”