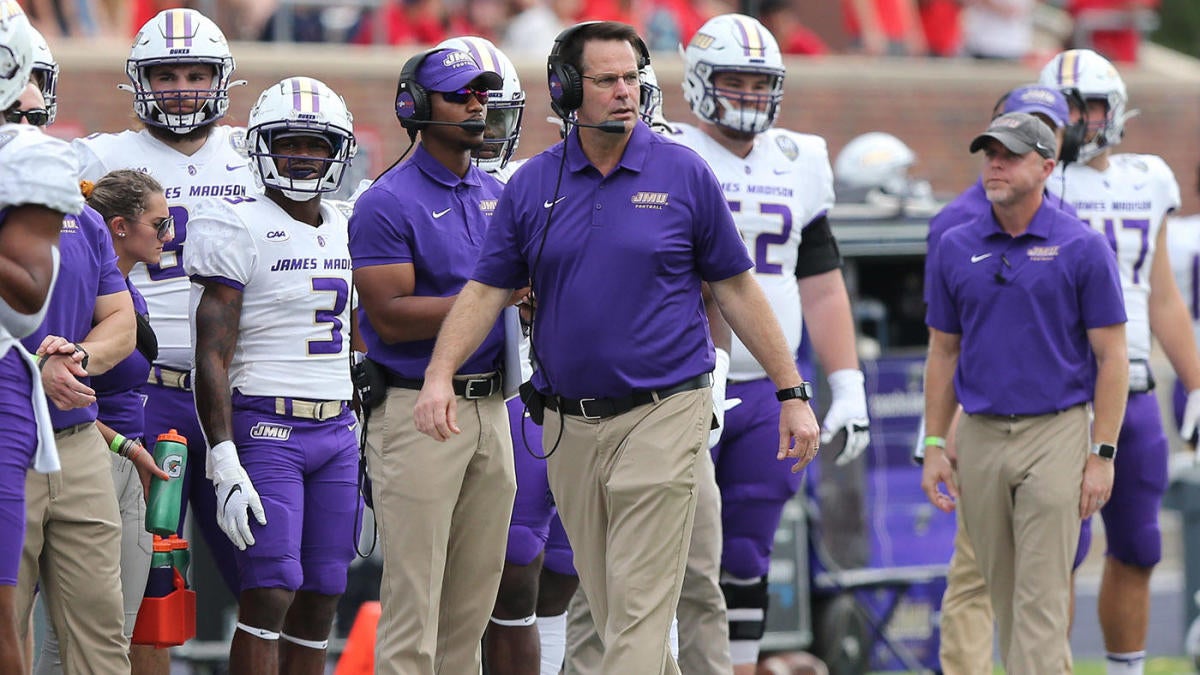 This fall, James Madison will make its FBS debut in the Sun Belt Conference. With the right timing, the right coach and an instilled culture of excellence, the Dukes are doing so knowing they can be one of the bigger FCS-to-FBS success stories of the modern era.

Sitting in the western part of Virginia in the Shenandoah Valley, the Harrisonburg-based campus and its athletic department have seen rapid growth in the 21st century. The Dukes won the FCS (then Division I-AA) national championship in 2004 with head coach Mickey Matthews, and that success helped kick-start an investment in football that paid off with seven more conference championships, three more FCS national championship game appearances (2016, 2017, 2019) and another national title in 2016.

The on-field success and school’s location have made JMU a frequently mentioned candidate for FBS expansion in years past. There were even potential opportunities to make the move to the FBS about “10 or 11 year ago,” according to head coach Curt Cignetti, but the school opted to defer and continue the building process, both in football and other sports.

The cancellation of the 2020 fall season due to the COVID-19 pandemic sparked renewed discussions about where the Dukes stood in the Division I landscape, and massive upheaval in the Sun Belt provided an opportunity for JMU to find a strong landing place at the FBS level. In joining the Sun Belt, JMU lines up with old FCS foes Appalachian State and Georgia Southern, while also establishing new regional rivalries with fellow Sun Belt newcomers Old Dominion and Marshall, both of which are joining the league from Conference USA.

While the move provides some familiarity, JMU is transitioning to the FBS in unprecedented fashion. What has previously been a two-year transition period will be attempted in just one season. While other programs have used those years to flip the schedule to FBS-level competition, the Dukes will be playing a full eight-game Sun Belt schedule plus a nonconference slate that includes a trip to Louisville on Nov. 5. Welcoming the challenge of a tougher schedule while the program transitions is just the first piece of what’s already become an aggressive scheduling philosophy, with the Dukes lining up more Power Five foes in 2023 (Virginia), 2024 (North Carolina) and 2025 (Virginia Tech).

The right coach at the right time

While FBS play — or even making this kind of transition — might seem intimidating, there’s little in college football that will be a surprise to Cignetti. The 61-year-old son of College Football Hall of Fame head coach Frank Cignetti Sr. is closing in on 40 years of college coaching experience at all levels of the game. From spending four years as a wide receivers coach and recruiting coordinator for Nick Saban at Alabama, to a seven-year run with NC State as quarterbacks coach (Cignetti helped Philip Rivers and the Wolfpack set a single-season school record for wins), the Dukes’ coach has been on the sidelines at the highest level of college football. On the other end of the spectrum, Cignetti has experience at smaller schools from his time as an assistant at Davidson, Rice and Temple in the late 80s and early 90s.

Cignetti’s last 11 seasons, all as a head coach, have prepared him to guide a proud JMU program into its FBS era. He started at IUP, where his father was the head coach from 1986-2005, and totaled a 53-17 record while leading the Crimson Hawks to three Division II playoff appearances and a conference title in 2012. He then took over an Elon program that had won seven games combined in the prior three seasons, leading the Phoenix to back-to-back FCS playoff appearances and top-25 finishes. That success paved the way for his hire at JMU, where he’s upheld the standard of national championship contention and now faces the challenge of raising the bar for the program again with a step up in competition.

“There’s no question this a very unique challenge. All the places I’ve been, I’ve been blessed. It’s prepared me for this moment,” Cignetti told CBS Sports. “I feel like every day when we come in we’ve got a plan.”

That plan has helped Cignetti lead JMU to a 33-5 record across his three seasons with the Dukes, reaching the national semifinals each season and finishing as the national runner-up in his first year with the program. JMU was one of the few places in the country where the sales pitch included joining a program that competes for a national championship every single year. Now, that ingrained culture of success will be a key in helping the Dukes stay focused on excellence while the competition, and expectations, change with this move.

“That’s what I learned from Nick [Saban] at Alabama,” Cignetti said, referencing JMU’s “process-oriented” culture. “Who we’re playing doesn’t change that result. Every Saturday, the players will expect to win.”

Building out an FBS roster

“Since our [2021] season ended, we’ve operated like an FBS school,” Cignetti explained.

Thanks to the NCAA-granted extra year of eligibility due to the pandemic, JMU’s scholarship numbers were already up into the 70s, but building up to the FBS standard of 85 scholarships was met with challenges. The transfer portal has made things trickier; namely, JMU faces many of the same challenges that all Group of Five programs face in terms of losing top guys to other programs. The Dukes have also lost the edge of being a preferred destination when NCAA rules necessitated a player move down a level to avoid sitting out a season when transferring out of an FBS program.

“Like many Group of Five schools in the country, your top one, two or three guys are going to get poached,” Cignetti said.

Understanding and adapting to the new recruiting and roster management environment hasn’t surprised Cignetti or his staff. Part of operating like an FBS school is developing a new way to structure recruiting — an effort helped initially by coaches who have seen that transition up close. Corey Hetherman, now Rutgers’ linebackers coach, was the the AFCA FCS Assistant Coach of the Year as JMU’s defensive coordinator in 2021 and had prior experience as an ODU assistant as the Monarchs transitioned from the FCS to FBS in the early 2010s. Examples set by Appalachian State and ODU can give some guidance into navigating that roster management transition, but JMU is entering a transfer and recruiting environment that is as unprecedented as the one-year transition itself.

Ultimately, Cignetti knows some of the hardships he and his staff have faced will fade away as the program further entrenches itself into the fabric of the FBS landscape.

“I think this program will only improve and get better every year,” Cignetti said, noting that the Dukes have been getting “hammered” on the recruiting trail for being ineligible for a bowl game or conference championship this season. “The next class [2023 cycle], they can’t get hit for that.”

The Sun Belt media projected JMU to finish sixth, or next-to-last, in the East Division at the conference’s media days earlier this week. Cignetti quipped that Elon was also projected to finished near the bottom of the Colonial Athletic Association during his first year with the Phoenix, only for that team to win eight games and earn a FCS playoff bid. Still, there is absolutely an acknowledgement that the move to an FBS schedule has changed the margin for error when it comes to wins and losses.

“Now, every week you have to play your A-game,” Cignetti said. “Before, you could maybe play your C-plus game and get the result. That’s not the case”

It’s possible that Sun Belt preseason poll voters believe there will be a toll that postseason ineligibility takes on the program when it comes to navigating the full Sun Belt schedule. But while the Dukes might not be eligible for a bowl game, that hasn’t changed their focus. Much of that is a credit to the culture that’s been built.

“I don’t see our team having an issue with motivation this year because the motivation will always be winning on a week-in, week-out basis,” JMU star defensive lineman Isaac Ukwu said at Sun Belt Media Days. “No matter whether we can win a conference championship or win a bowl game, once the whistle blows and we get between the lines it’s going to get competitive no matter what’s on the line.”

Running back Percy Agyei-Obese put it even more succinctly. “The standard is excellence at JMU,” he added. “Once the whistle starts, it’s game time.”

There will be challenges if the players who are used to winning more than eight times out of 10 start to see that winning percentage drop in 2022, but expectations are that the team and culture are good enough to be competitive against everyone on the schedule. The defensive line is a position of strength, and while the quarterback battle is not yet settled heading into fall camp, Cignetti is confident that he has three guys (Colorado State transfer Todd Centeio, Billy Atkins and freshman Alonza Barnett) that can all get the job done.

With additional recruiting classes and further investment in football, this is a program that should only get better each year. However, you don’t have to hold off all the celebrations for success until further down the road. While the Dukes might not be eligible for a conference championship in 2022, it’s not crazy to think this team will be sitting closer to conference championship contention than what the Sun Belt preseason poll suggests.