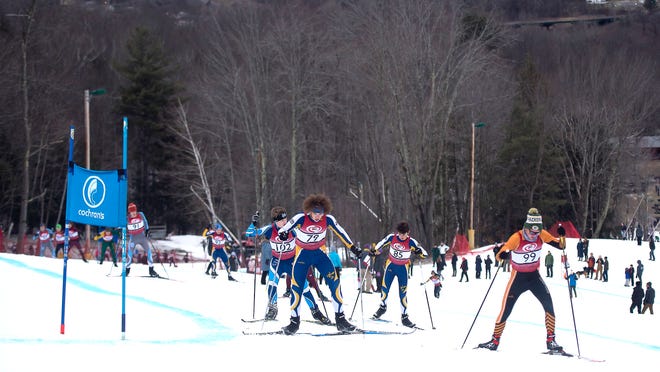 Gov. Phil Scott has given winter sports athletes a faint green light to begin their seasons.

Starting Saturday, Vermont’s school-based and youth recreation sports teams will be permitted to conduct practices for individual skills, strength and conditioning, the governor announced at a news briefing on Tuesday.

“This means no contact, physical distant and wearing a mask at all times,” Scott said.

With schools going on break for the holidays, it is unclear whether many, if any, will opt to begin practicing on such short notice. The governor had hinted Friday that changes could be possible this week, but Tuesday’s announcement allows only three days’ time for programs to prepare to start the day after Christmas.

Adult leagues are not included in the change and no spectators are permitted for these activities.

Outdoor recreational activities also received the OK to resume in a more social form this week. Sports such as sliding, snowshoeing, cross-country skiing, snowmobiling, ice fishing and hiking fall under this umbrella.

“We are returning to prior guidance, which means as long as you can be physically distant, wear a mask, you can participate in these activities with others outside your household,” Scott said.

“But you’ve got to follow the ‘arrive, play and leave’ approach, meaning mingling afterwards is not allowed,” he said. “You don’t have to look any further than the hockey outbreak in central Vermont to see how dangerous one tailgate can be.”

Scott also announced Tuesday that gatherings between two trusted households will be allowed for the holiday season, from Dec. 23 to Jan. 2.

“I’m grateful for the work Vermonters have done to level out the number of cases and to start to see a decrease,” Scott said. “I believe these are the right steps at this time.”

As for the VPA’s targeted Jan. 11 return to competition, Johnson believes it’s unrealistic at this point. Scott still needs to provide permission for teams to scrimmage and conduct full-bore practices, and also lift the no-games mandate.

“I think we are talking at least another month if not longer before we actually look at games,” Johnson said.

Last month, the VPA voted to extend the winter season to March 26-27, if necessary, to complete its postseason.

More:Gov. Scott: No change to suspension of sports activities or multi-household gatherings

In the middle of drafting an email to his coaches Tuesday, Champlain Valley athletic director Dan Shepardson said the state’s biggest high school will allow teams to begin modified practices on Dec. 26.

“For the mental health of kids, getting in the gyms and on the rinks, it’s absolutely good news,” said Shepardson, who had recently been advocating for Nordic and alpine skiers to resume. “I think the timing is good, it’s going to lift people’s spirits and we can see the light at end of the tunnel.”

Because practices are limited, Shepardson said, CVU teams won’t have tryouts over the holiday break.

Become a member of the Vermont Varsity Insider Facebook group at https://bit.ly/2MGSfvX.