Urban Meyer among usual, sad suspects being tossed out for college coaching spots 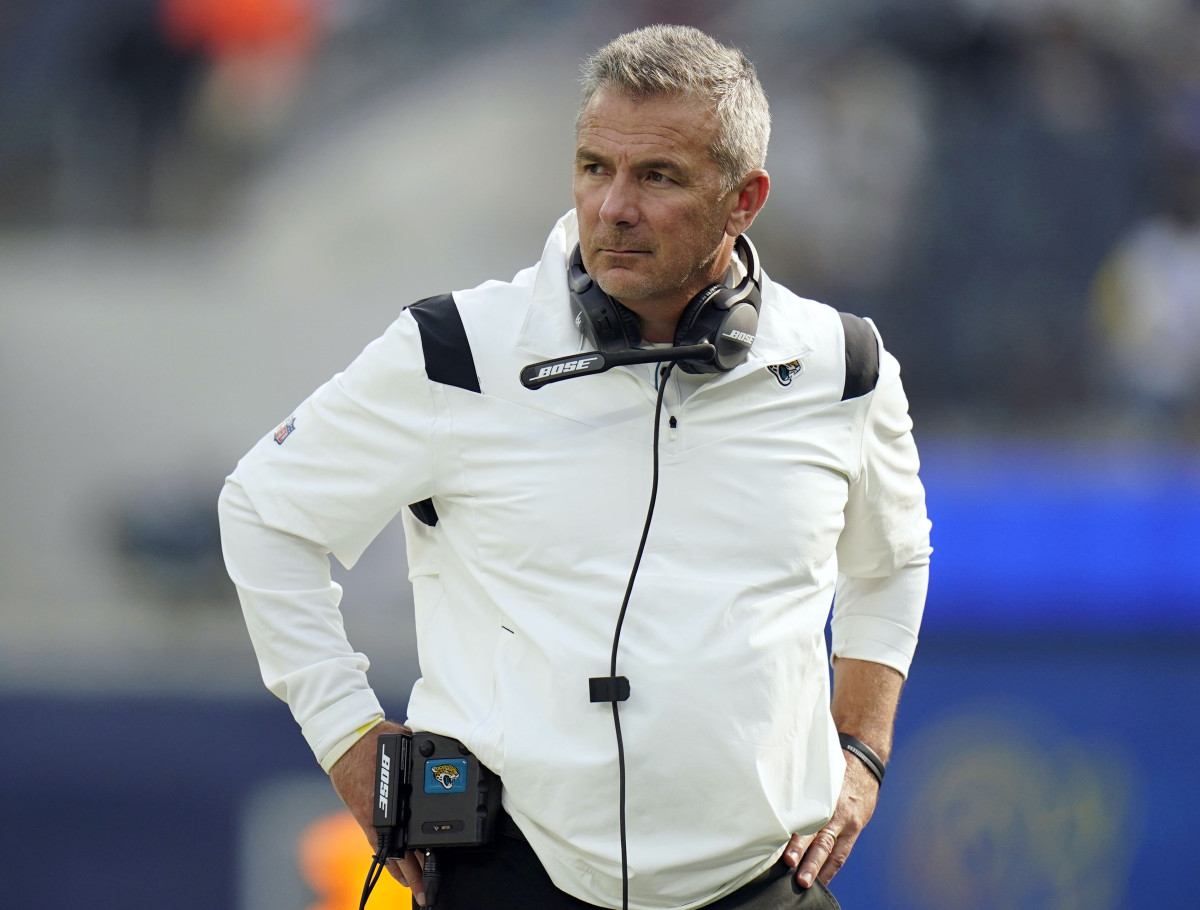 The Temptation of the Winning Scammer

Fox Sports’s Big Noon Kickoff show played to the Nebraska crowd Saturday, and the crowd played to the show. Host Rob Stone asked the red horde of fans the leading question, “Anybody out there want Urban Meyer (1) to be their head coach?” They responded in kind, roaring and chanting the Fox Sports analyst and three-time national champion’s name. Some wore “Hire Urban Meyer” T-shirts into the stadium to see the Cornhuskers get annihilated by Oklahoma.

Here we go again. Nature abhors a vacuum, and apparently it also abhors a season without Urban Job Spec.

When the going gets desperate at a powerhouse program on the slide, this is often how fans react. Just give us a winner, we don’t care about the baggage. Nebraska is far enough down—so far down, in fact, that Colorado might be the only worse Power 5 program at the moment—that a portion of the fan base is willing to compromise in certain areas.

They look at Meyer and see championships. Not the multiple embarrassments during his 2-11 NFL experiment in 2021. Not the three-game suspension that began his final season at Ohio State. Not the rampant off-field problems during his Florida tenure. Not the daily melodrama emanating from the foremost narcissist in college coaching, a man who has rarely left any job on happy terms.

The allure of a proven winner is powerful. It often overrides the high-minded ideals people love to attach to college coaches. Everyone wants to think their favorite school (alma mater or not) is committed to Winning The Right Way—but, in reality, a whole lot of people don’t care about the three words that come after Winning.

Which is why Meyer’s presence on Nebraska’s campus created a tizzy. There is little doubt Meyer would succeed if he gave it another try, because he’s succeeded everywhere that wasn’t the NFL. But does Nebraska really want to go there? Probably not, and the feeling might be mutual. ESPN’s Pete Thamel reported Sunday that, contrary to other media reports, school administrators and Meyer did not discuss replacing the fired Scott Frost and Meyer plans to stick with his TV gig.

Fact is, there are less toxic candidates within an easy drive of Lincoln. Start with Lance Leipold (2), who merely has led Kansas to a 3-0 start in his second season. The Jayhawks haven’t won more than three games in an entire season since 2009. Leipold’s career record at Division III Wisconsin-Whitewater, Buffalo and Kansas is 151-49. There is also Iowa State’s Matt Campbell (3), whose Cyclones are 3-0 and in search of a sixth straight winning season, which last happened there from 1904-’09.

Meyer isn’t the only coach of his ilk stoking the ardor of fans who want more wins. Later Saturday, exiled winners/sinners showed their coaching chops while nearly pulling massive upsets. Bobby Petrino (4) and his FCS Missouri State team had a stunning 10-point lead against his former school, No. 10 Arkansas, in the fourth quarter before running out of gas. Hugh Freeze (5) and visiting Liberty were on the brink of taking down No. 19 Wake Forest, but a failed two-point conversion with 1:11 left ended the Flames’ bid.

Clearly, both those men are still elite coaches. But they’re at Missouri State and Liberty for a reason, having run themselves out of better jobs. Both would jump at a chance to upgrade—don’t believe them if they say otherwise—and they may get that chance. As the revenue continues to skyrocket in college football, so do the stakes. And so does the willingness to make a hire that might require compromising some standards.

The easiest path back for either pariah could be at Auburn (6), where the only standard is winning. The Loveliest Little Mercenary Football Program on the Plains could be in the market for a new coach soon.

Bryan Harsin’s job status was shaky enough before Saturday, then the Tigers were routed at home by Penn State. He hasn’t beaten a Power 5 opponent since last October, and the boosters are gunning for him. If the money people make the decision after already pushing out athletic director Allen Greene, Freeze especially could be an attractive candidate. His success at SEC West rival Mississippi hasn’t been forgotten, even if it ended in a burst of scandal. And Auburn boosters likely harbor especially strong memories of the Rebels’ successive upsets of Alabama in 2014 and ’15 under Freeze.

There are other schools moving toward making changes in the coming weeks and months. Don’t be surprised to hear a few of the usual exiled suspects’ names bandied about for those positions. And, what the hell, throw old reliable Jon Gruden back in the mix, too.

Four For the Playoff

Each week, The Dash performs the selfless duty of serving as a one-man College Football Playoff selection committee and seeding the tournament as if today were Selection Sunday:

The Bulldogs (3-0) are the best team in the country by a wide margin at present. They continued their steamrolling defense of last year’s natty Saturday by destroying South Carolina on the road, 48-7. They went the first 179 minutes of the season without giving up a touchdown before yielding one in garbage time against the Gamecocks. But the real revelation has been the Georgia offense—coordinator Todd Monken’s juiced-up attack is third nationally in passing yards, and quarterback Stetson Bennett has gone from being questioned his entire career to a Heisman Trophy candidate. Next up for Georgia: Kent State on Saturday.

The Buckeyes (3-0) got deeper into their offensive bag Saturday and scored 77 points on Toledo, with nine players scoring touchdowns. And that’s without star receiver Jaxon Smith-Njigba getting on track this season (he has just three catches in two games). Ohio State’s team pass-efficiency rating of 208.23 ranks second only to Army, while its 12 touchdown passes and zero interceptions thrown are both tied for the national lead. Next up for Ohio State: Wisconsin on Saturday.

The Trojans (3-0) have come out of the gate fast and clean, scoring 40 or more in each game and not yet committing a turnover. Quarterback Caleb Williams is making quick and sound decisions running coach Lincoln Riley’s offense, and while the defense is a work in progress, it is producing big plays—10 turnovers forced and 14 sacks. Next up for USC: at Oregon State on Saturday in a matchup of Pac-12 unbeatens.

The Nittany Lions (3-0) are the only team in the nation with a pair of Power 5 road wins, rallying at Purdue and then dominating at Auburn. They’ve developed a power running game to complement the low-risk passing of quarterback Sean Clifford, and their defense has been good enough, particularly in limiting big plays. The path is pretty clear pointing toward a game at Michigan on Oct. 15. Next up for Penn State: Central Michigan Saturday.