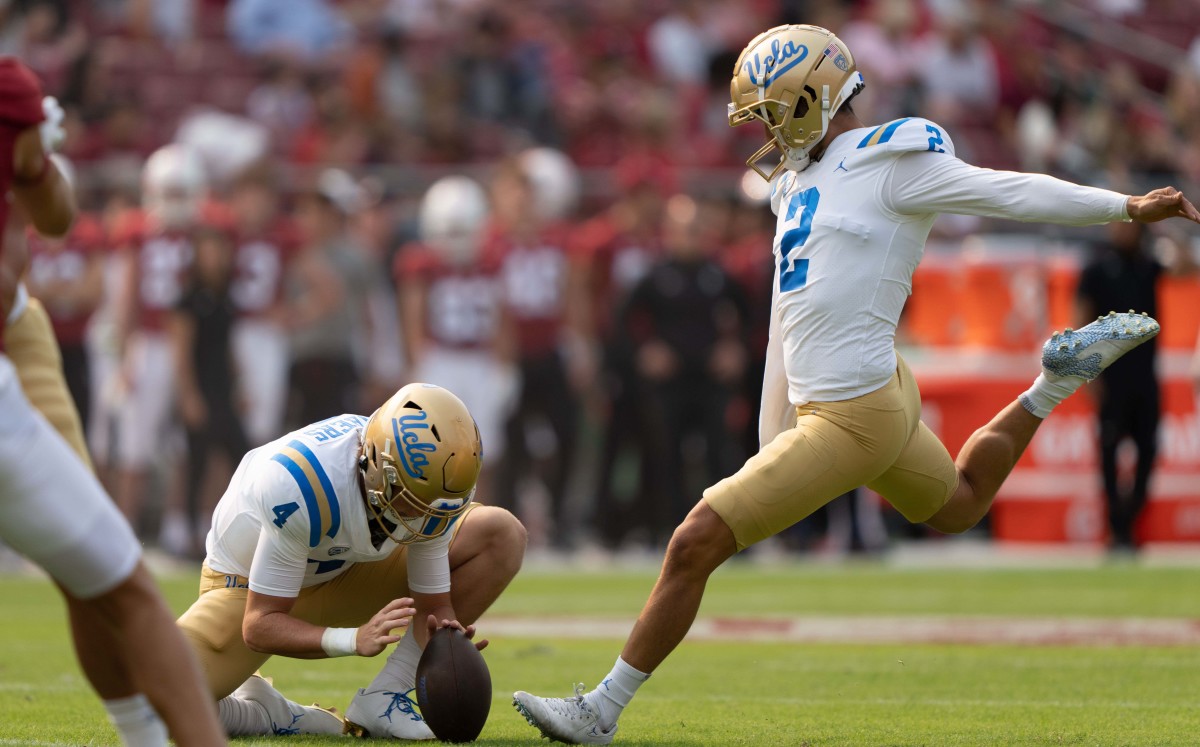 With UCLA football’s offseason winding down, it’s time to start looking ahead to the 2022 campaign and what lies ahead for the Bruins on the gridiron. Before scouting opponents and projecting the Pac-12 pecking order, it’s best to look within by picking apart how UCLA will shape up on its own sidelines,

All Bruins has been breaking down every position group over the past two weeks, and special teamers are the final ones on the slate. To catch up on the positions already covered, take a look below:

For the third year in a row, Barr-Mira is poised to headline the Bruins’ special teams unit, but this time, he could be taking on additional responsibilities.

Barr-Mira is still the starting place kicker in Westwood, a role he has had locked down for three seasons now.

The coaching staff awarded Barr-Mira with a scholarship to end fall camp, though, so they seem to trust him to get back on track this fall.

Another reason Barr-Mira was able to earn that scholarship was that he is currently listed as the first-string punter. Barr-Mira took most of the starter’s reps at punter through fall camp, and even after Barry took over for the start of game week, it looks like Barr-Mira is still the man at that spot.

With Barr-Mira in line to handle double-duty, Barry will be his backup at the punter spot. Barr-Mira has been the far more consistent in terms of hang time and distance in practice, but Barry has the size and skill to earn that spot at some point this year or next.

Lopez is officially listed as the backup kicker, but Firebaugh seems like he’s been taking more reps in the field goal drills. The JuCo product is also a punter, and he is someone who could have a future in Westwood as well.

The kickoff specialist duties have gone back to Lopez, and Barr-Mira will be there to back him up if need be.

Landherr is heading into his fourth year as the Bruins’ go-to long snapper, and he has managed to carve out spots on both academic and positional award watch lists heading into the season. Gardner has had a few botched snaps in practice as of late, but he is a reputable backup.

Holland is a transfer quarterback from Fordham, but he has not taken reps at that position since arriving for fall camp. He does appear to have replaced Ethan Garbers as the No. 1 holder, though, signifying coach Chip Kelly’s preference of having a quarterback hold down that role.

Allen is a threat to bring back a kick for a touchdown any time he gets the ball, finally breaking through with a score against USC in 2021. Jones will be set back alongside him, and he, too, has plenty of speed to spare.

Bobo is listed as the starting punt returner on the team’s official two-deep, but that doesn’t seem right based on what the team has shown in practice. Loya’s hands and shiftiness could help him replace Kyle Philips admirably, while Bobo and his solid frame will likely end up watching those plays from the sidelines.

Barr-Mira had a really rough stretch in the final three-quarters of the 2021 season, and it’s difficult to call it uncharacteristic considering that’s half of his entire college career.

Still, positive regression should be in store for the upperclassman, who has been very accurate inside of 50 yards at practice. With UCLA’s offense potentially set to lead the Pac-12 in offensive output, Barr-Mira should be leading that charge as one of the conference’s top scorers.

There isn’t really a situation where Barr-Mira gets benched for Lopez or Firebaugh, barring injury, unless something goes catastrophically wrong. Even with the lack of direct competition, last year’s struggles should prove to be enough to fuel Barr-Mira back to the top.

Barr-Mira’s standing as the starting punter is a lot less secure, however. The Bruins could end up using multiple punters during nonconference play, since field position presumably won’t mean much as they cruise to three straight victories. That cushion should give them time to experiment and test out both Barr-Mira and Barry, and then they’ll go from there with the winner of that in-season competition.

It’s a lot to expect two kick return touchdowns from Allen, but he is certainly a threat to do so. In all likelihood, he’ll wind up with one, but that’s obviously nothing to sneeze at.

Whether it’s Loya or Bobo working out at punt returner, neither seems poised to bring one to the house. Both have great hands, though, so the expectation should be that they can judge the ball in the air and make it through the year without coughing it up at all.

And for good measure, this could be the year Landherr makes the list of Patrick Mannelly Long Snapper finalists, considering he is already one of the 25 members of the preseason watch list.