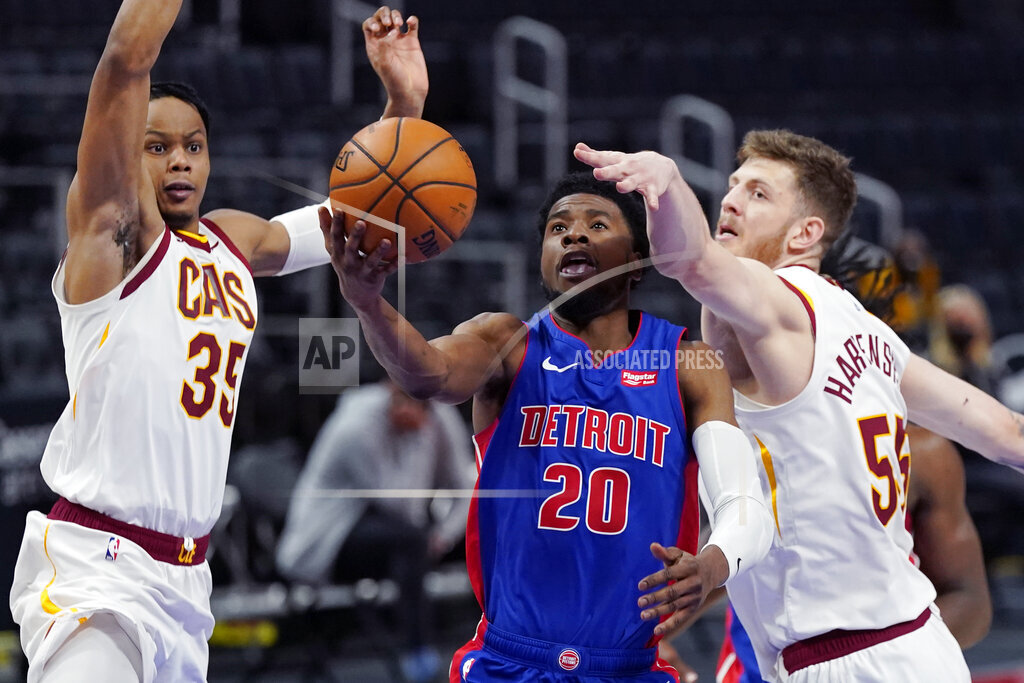 Pistons 109, Cavaliers 105 – Late baskets from Jacksons lead Pistons over Cavs, 109-105
Frank Jackson scored 20 points, including a tiebreaking baseline drive in the final minute, lifting the Detroit Pistons to a 109-105 victory over the Cleveland Cavaliers. Jackson was fouled on his basket with 29 seconds left. He missed the free throw but the Cavaliers couldn’t secure the rebound. Josh Jackson grabbed it and then scored to go up 107-103 with 16.5 seconds remaining, giving the Cavaliers their fifth loss in six games. Collin Sexton scored 28 points and Darius Garland added 23 for the Cavaliers. The backcourt scored the final 20 points for Cleveland.

Bulls 102, Celtics 96 – Vucevic scores 29, Bulls snap Celtics’ 6-game streak, 102-96
Nikola Vucevic had 29 points and nine rebounds, and the Chicago Bulls held off the Boston Celtics 102-96. Coby White added 19 points and seven assists to help the Bulls snap Boston’s season-high six-game winning streak. Chicago has won its last two since a five-game skid. Boston led by 12 in second quarter but struggled to execute down the stretch and finished with 17 turnovers. Jaylen Brown had 23 points. Tatum posted the first triple-double of his career with 14 points, 13 rebounds and 10 assists.

Spurs 109, Pacers 94 – White’s fast start helps lead San Antonio past Pacers 109-94
Derrick White helped San Antonio break away early by scoring 16 of his 25 points in the first quarter and leading the Spurs to a 109-94 victory at Indiana. Jakob Poeltel added 16 points as San Antonio won its second straight to stay in position for the play-in round. The Pacers were led by Malcolm Brogdon and Caris LeVert who each had 18 points in Indiana’s third straight loss — this one minus three opening-night starters. White’s scoring flurry allowed San Antonio to take a 36-21 lead after one quarter and the Spurs never let Indiana get closer than nine.

Red Sox 11, White Sox 4 – Red Sox top White Sox 11-4 on Patriots’ Day with no Marathon
There was no Boston Marathon on Patriots’ Day, but there was plenty of base-running at Fenway Park this morning.  The Red Sox erupted for six runs in the first inning of an 11-4 rout of the White Sox. Kiké (KEE’-kay) Hernández led off with a replay-aided home run, and Bobby Dalbec worked a 14-pitch walk during the big rally.  J.D. Martinez and Alex Verdugo (vur-DOO’-goh) each had three hits, including a solo homer.  Lucas Giolito (jee-oh-LEE’-toh) was pulled in the second inning, charged with seven earned runs and eight hits. Position players Yermín (yehr-MEEN’) Mercedes and Danny Mendick each pitched an inning of relief.  The Marathon was moved to Oct. 11 because of Massachusetts limits on crowds during the novel coronavirus pandemic. The Patriots’ Day game has been played by the Red Sox since 1959.

Stars 3, Red Wings 2 – SO – Stars get shootout win over Red Wings to boost playoff push
Denis Gurianov scored in the fifth round of a shootout to give the Dallas Stars a 3-2 win over the Detroit Red Wings. The shootout win provided a vital extra point for the defending Western Conference champions in their push to get back in the playoffs. Roope Hintz and rookie Jason Robertson both scored in regulation for the Stars, with Miro Heiskanen assisting on both goals. Robertson also converted the first shootout attempt for Dallas. The Stars moved into fifth place in the Central Division. The top four teams make the playoffs.

Predators 5, Blackhawks 2 – Kunin, Jarnkrok lead Predators to 5-2 win over Blackhawks
Luke Kunin and Calle Jarnkrok each scored a goal and added an assist to lead the Nashville Predators to a 5-2 victory over the Chicago Blackhawks. Matt Duchene, Mattias Ekholm and Tanner Jeannot also scored and Mikael Granlund had two assists for Nashville, which snapped a two-game skid. Alex DeBrincat and David Kampf scored for Chicago, which has lost two of three. Nashville has won all six meetings between the teams so far this season as they battle for fourth place in the Central Division. Dallas also is involved in a tight three-way race for the division’s final playoff spot.

NHL – Marleau breaks Howe’s games played mark
Another Gordie Howe record has fallen. San Jose forward Patrick Marleau is playing in his 1,768th NHL game, surpassing the all-time mark held by Howe for decades. The 41-year-old Marleau did it in tonight’s game against the Golden Knights in Vegas.

NFL – Alex Smith retires after comeback from gruesome leg injury
Alex Smith is retiring from the NFL after making an improbable comeback from a broken leg. Smith announced his retirement Monday on Instagram, saying he still has plenty of snaps left him just shy of his 37th birthday but is calling it quits to enjoy time with his family. Smith earned AP Comeback Player of the Year honors for getting back on the field last season, two years removed from his gruesome injury that required 17 surgeries. Washington released Smith in March and signed veteran quarterback Ryan Fitzpatrick in free agency. Smith was the No. 1 overall pick in 2005 and played 14 seasons for San Francisco, Kansas City and Washington.

NCAAFB – Hoosiers, Fighting Irish agree to 2-game series in 2030-31
The Indiana Hoosiers and Notre Dame Fighting Irish will play two games starting in 2030. Indiana visits South Bend, Indiana, on Aug. 31, 2030. The Irish then travel south on Sept. 27, 2031. The two in-state programs last played in September 1991 and Notre Dame has not played in Bloomington since October 1950. The Hoosiers went 6-2 last season and were ranked No. 12 in the final Associated Press Top 25. It was Indiana’s highest final ranking since 1967 when it went to the Rose Bowl. The Irish finished last season at 10-2 and ranked No. 5.