Trumpeter swans preen on the ice where Six Mile Lake feeds into the creek in northern Dickinson County. Trumpeters in the northern Midwest don’t migrate in winter, though they do travel in search of open water.
(Betsy Bloom/Daily News photo)

It’s very convenient that the picture window at our home looks out where Solberg Creek feeds into Six Mile Lake. For the west side of the lake, it’s the last section to freeze up and the first to open up each spring.

It provides a gauge of how quickly the ice might disappear, as the new water churning in from snowmelt acts like a drill, lengthening and widening the open water further into the lake ice. The strip goes from a slender spearpoint to a pool that, eventually, connects with the growing open water along the lake’s edges as the ice recedes.

It gives our home a great vantage point for seeing what might be migrating through, as waterfowl congregate in these early open areas in the ice.

The other prime spot at Six Mile Lake is the bridge where the lake flows into Six Mile Creek. Even during the coldest parts of winter, the bridge will have open water; this winter, the creek never froze over. Once migration gets in gear, this area reliably will have ducks, Canada geese and trumpeter swans.

This year already had a pair of swans, North America’s largest waterfowl species and its heaviest bird. Adult males can weigh up to 30 pounds and females 23 pounds. 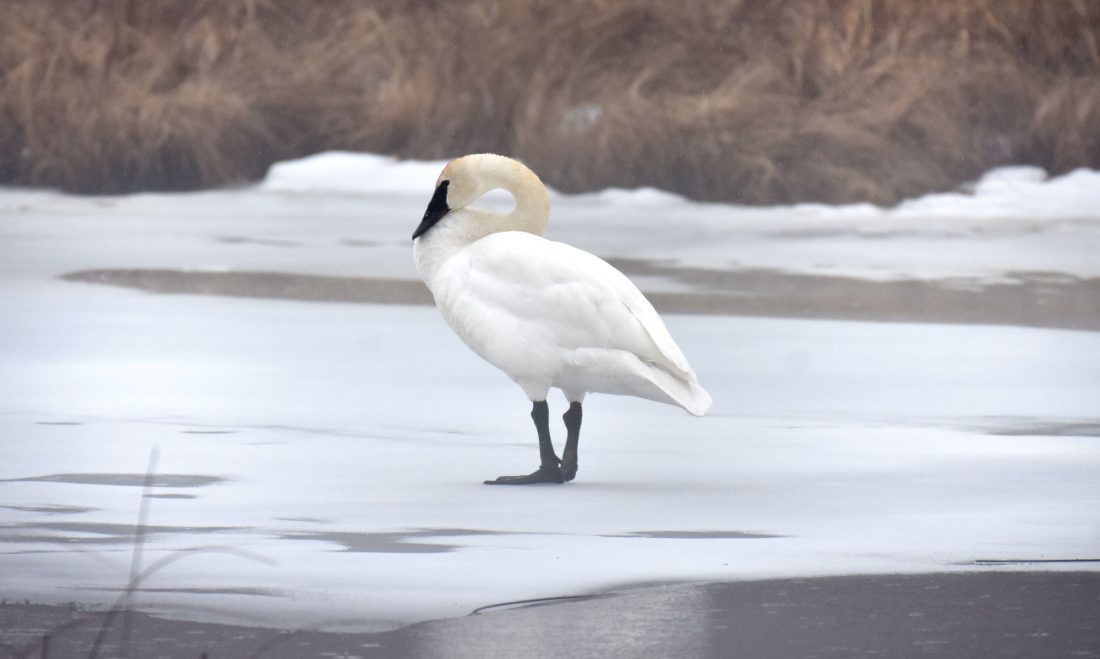 A trumpeter swan hauls out on the ice at Six Mile Lake in northern Dickinson County. (Betsy Bloom/Daily News photo)

Unlike their tundra swan cousins, trumpeters in the Upper Peninsula and northern Midwest states — known as the “interior population” — do not migrate in winter, though they will move shorter distances to find open water. It also is the only swan known to reproduce here — the tundra, as the name implies, goes to the far north to nest. Non-native, feral mute swans do breed in downstate Wisconsin and Michigan but as far as I know have not ventured this far north.

As has been mentioned before in this column, the trumpeter swan is an endangered species success story, going from the edge of extinction in the 1930s to an estimated 63,000 in 2015. Yet they still face risks, from fatally ingesting lead shot while feeding to colliding with power lines to having “the lowest genetic diversity of any waterfowl species that has been studied,” according to the non-profit Trumpeter Swan Society, www.trumpeterswansociety.org.

With its size, the trumpeter swan also needs a lot of open space as a runway to get that big body into the air. So loss of wetlands and habitat can affect where they can settle in and nest.

And while the pair at Six Mile Lake on Wednesday seemed unaffected by my taking photos — I turned off the motor and stayed in the vehicle — human disturbance of brooding birds can lead trumpeter swans to abandon their nests.

So enjoy catching sight of these magnificent swans when they show themselves but don’t press the issue. 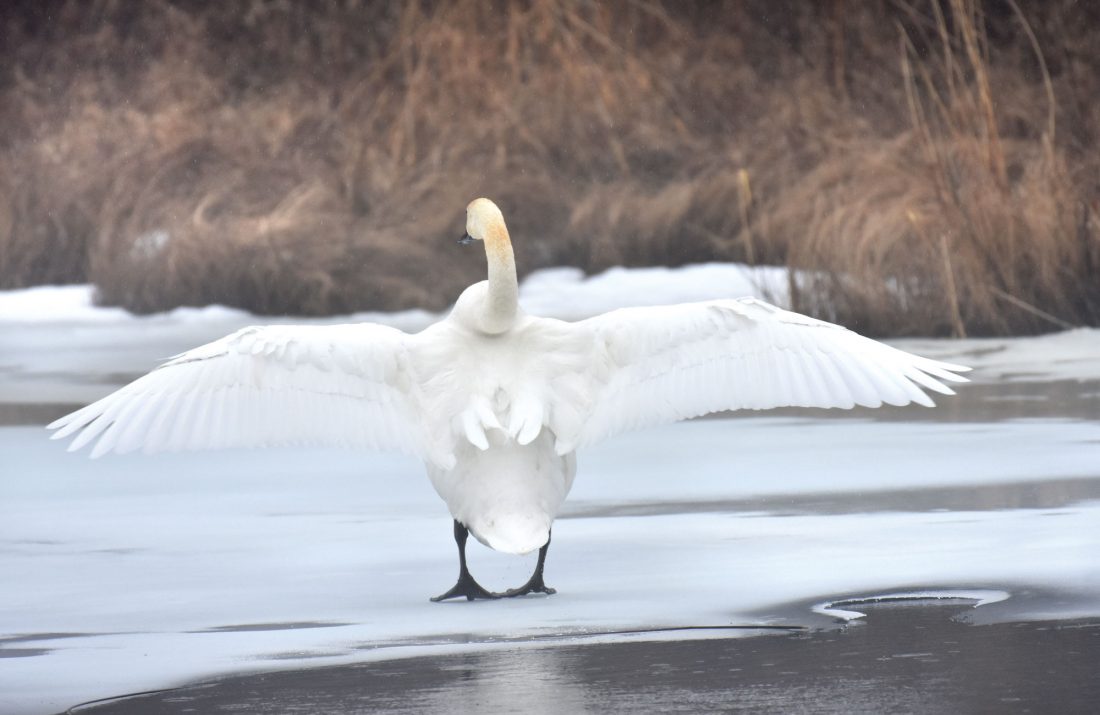 A trumpeter swan hauls out on the ice at Six Mile Lake in northern Dickinson County. After stretching its wings, the swan settled onto the ice for some preening before tucking its head into its back for a nap. (Betsy Bloom/Daily News photo)

As hoped, last week’s warmer weather seems to have spurred a surge in early spring migration. While the bulk of the birds still seem to be mostly in southern Wisconsin and Michigan, some early arrivals have landed even in the Upper Peninsula.

Multiple red-winged blackbirds have been at the feeder at our home. Several area residents have seen robins. A photo of a killdeer eating an earthworm in Marquette was posted Thursday on the Upper Peninsula Birding Facebook page (which I would recommend).

Sandhill cranes should not be far behind, if not here already — I would not be surprised to hear their calls today, given the forecast of 50s and sun.

He expects the pace may slow this coming week, given the lack of “favorable south winds.”


LANSING, Mich. (AP) — Advocates for open government on Tuesday unveiled the specifics of their ballot proposal …