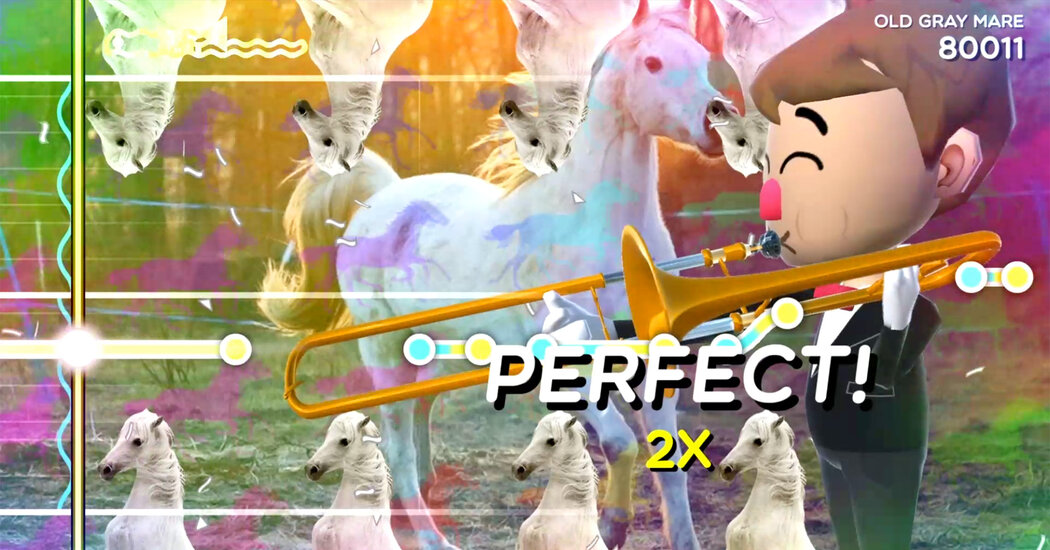 LONDON — Backstage at the Royal Festival Hall, one of London’s grandest classical music venues, James Buckle, the bass trombonist for the Philharmonia Orchestra, braced himself to do something he’d never done before: play the familiar opening of Beethoven’s Fifth Symphony.

Trombone players usually spend most of the symphony waiting in silence at the back of the orchestra, ignored by the audience, only getting the chance to play in the piece’s final, euphoric movement. But thanks to the popular new video game Trombone Champ — a sort of Guitar Hero for brass players — Buckle was having a go at its exhilarating opening as if he were one of the first violins. “I have to admit I’m a bit excited,” he said.

Buckle, 29, who gamely agreed to test out Trombone Champ last weekend, gripped a mouse, which he would move up and down to change the pitch of his virtual trombone, and placed his left hand on the laptop’s space bar, which he would hit to play notes. Then, the game began. As a flurry of notes moved across the screen, from right to left, Buckle desperately tried to keep up. But things did not go according to plan, and what came out of the laptop’s speakers was less a Beethoven masterwork than an out-of-tune mess.

“God, it sounds like me warming up!” Buckle said.

As the tune ended, Buckle leaned back, grinning in delight. “This is going to sound really sad,” he said, “but it felt genuinely great getting to play that.”

Over the past week, Trombone Champ has become a surprise phenomenon online, with the game’s fans going on social media to post clips of their fraught attempts to play “Auld Lang Syne,” “The Star-Spangled Banner” and Richard Strauss’s “Also Sprach Zarathustra.” Last week, a clip of someone mangling Rossini’s “William Tell Overture” was retweeted over 40,000 times.

The game has attracted rave reviews. Christopher Livingston, in PC Gamer magazine, called it “a serious game of the year contender” (Livingston added that he wasn’t joking, in case anyone wasn’t sure). A handful of gamers have been so enamored by it, they have built trombone-shaped controllers so they can play the game more like real musicians.

But what do real trombone players make of it?

Trombone Champ does not take the trombone, or trombonists, very seriously. It calls the players “tromboners,” for a start. Before each song, it displays pseudofactoids about the trombone (“in England, trombone is spelt troumboune,” reads a typical one). In clips, the “tromboner” dances even while playing something serious.

But Buckle, the professional trombonist, had only positive things to say about the game. “If it raises awareness or means anyone wants to pick up the trombone, it’s a great thing,” he said.

Trombone Champ is the creation of Dan Vecchitto, a web application designer at Penguin Random House, who — in partnership with his wife, Jackie Vecchitto — in his spare time makes video games in the bedroom of his Brooklyn apartment.

Vecchitto, 38, said he came up with the idea four years ago while trying to think of concepts for fun arcade games. “I just got this mental picture of an arcade cabinet with a giant rubber trombone attached,” he said. After realizing that would be difficult to make, Vecchitto set about creating a version where players use a mouse to emulate a trombone’s movements, which would allow them to slide between notes.

It was immediately clear the game would be a comedy, Vecchitto said, and he took every opportunity to insert jokes.

Vecchitto used to play saxophone in high school bands, but said he had no experience of the trombone. Asked if he consulted any trombonists while making the game, Vecchitto said, “I meant to,” then laughed. At one point, Vecchitto bought a plastic trombone, called a pBone, “so I had some idea what this thing actually feels like,” but that was as close as he got to in-depth research.

“I was a little concerned that real trombonists might take offense,” Vecchitto said, “but for the most part they’ve been extremely supportive.”

Vecchitto said he had received one negative email from a jazz trombonist telling him the game was disrespectful to the instrument, but otherwise a host of players, including several trombone YouTubers, has praised it.

Several trombone players said they thought the game was a positive showcase for the instrument. Xavier Woods, a star wrestler for WWE who plays the trombone in bouts and is also a well-known gamer under the name Austin Creed, said that he had not expected the game to hold his attention, but that he had ended up playing it for hours.

The trombone’s joy is its versatility, Creed said: “You can make incredible jazz on it, you can play at Carnegie Hall and the most beautiful sounds will come out of this horn, and then you can play at a kid’s clown birthday and just make everyone giggle.”

Alex Paxton, a British composer, said in his London apartment that clips of Trombone Champ were so filled with out-of-tune notes and microtones that they “had all the hallmarks of great experimental music.” Paxton then sat down to try the game for himself. After a few tries, he appeared to grow weary of following its rules, and just started waggling the mouse up and down rapidly to create a barrage of noise. As he did, the screen started glowing a range of psychedelic colors. Then, Paxton went and got one of his own trombones and tried to play a duet with the game.

Trombone Champ was not much like playing a real instrument, Paxton said afterward. In real life, he said, notes normally go awry for beginners when a player’s lips are in the wrong position, something the game does not approximate. Even so, the game “shows how the trombone can be a license to be weird, to be yourself,” Paxton said.

Whether the game will encourage any online “tromboners” to take up the real instrument remains to be seen. At the Royal Festival Hall, Buckle, of the Philharmonia, invited a colleague, Joseph Fisher, who plays the viola in the orchestra, to give it a try. After struggling with some trombone Tchaikovsky on the laptop — and giggling when he fluffed a note and the word “Meh” appeared onscreen in big letters — he was asked if he might switch instruments.

“Not to the trombone,” Fisher said, “but I’m definitely going to get the game.”