Trey Lance’s injury throws 49ers’ future up in the air 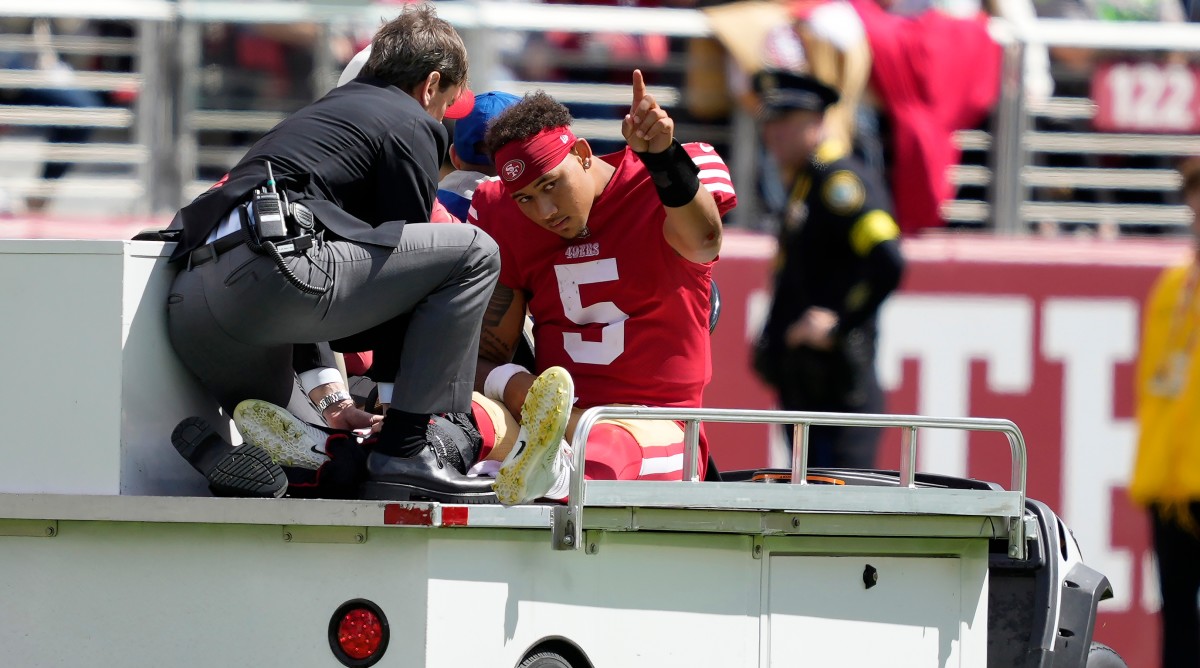 • The 49ers are going to be in an interesting spot coming out of the 2022 season, depending on how things go the rest of the way with Jimmy Garoppolo at quarterback. The recovery timetable for Lance is four to six months. And there is some good news here, news that was made obvious by the fact that Lance was hanging out with Garoppolo and other teammates after the game in the training room, and didn’t need to have surgery until Monday.

Long story short, had this been an “open” ankle fracture (what used to be known in the medical community as a compound fracture, where the bone breaks through the skin), he’d have needed emergency surgery, and the recovery would be more complicated. That, in fact, is the recovery Dak Prescott faced two years ago.

So the 49ers can reasonably expect to see Lance back and moving around in the spring. The question would be what their quarterback room will look like then. Garoppolo has a no-tag provision in his revised contract, which means there’s nothing the Niners can do to restrict him from leaving after the season. And that means, in all likelihood, Garoppolo is gone after this year, and San Francisco is left with a rehabbed Lance and Brock Purdy on the roster.

And the issue with that? Well, we just don’t have much information on where Lance is as a player right now. Last year, his two starts came with an injured index finger on his throwing hand. This year, his first start came in a monsoon in Chicago and his second start, on Sunday, he lasted 16 snaps and threw the ball just three times. That means he’ll go into his third year as a pro having taken a total of 262 snaps, which is four or five games’ worth.

That’s not a lot to go on, of course. But looking at the circumstances right now, the likelihood is it’s going to be what the Niners are working with.

• As for Garoppolo, his contractual situation will obviously be affected. His base salary for the year is $6.5 million. There’s another $500,000 in per-game roster bonuses in there, too—he gets those just for being on the game day roster each week (so he’s already collected two installments). From there, here are the incentives tied to his playing time:

Now, the good thing for the Niners is because Garoppolo started 15 games last year and made it to the NFC title game, most of these incentives are designated “likely to be earned” and already count against this year’s cap—so there won’t be an impact on the team’s 2023 cap, when a Nick Bosa extension will be part of the equation. But from a cash standpoint, this whole ordeal won’t be cheap for the Niners.

That said, with a championship roster in place, I think everyone there would tell you that, for this kind of insurance, with a guy who’s led the team to the conference title game in two of the last three years, it should be worth every penny. Especially when you consider that, as it stands right now, Garoppolo’s probably the better quarterback (the Niners anticipated that changing as the year went on and Lance got more experience).

• I thought Jared Goff had an interesting answer when I asked whether he’s motivated by people thinking he was, well, all done as a long-term starting quarterback in the league after the Rams dumped him 20 months ago.

“I really try to stay intrinsically motivated; that’s the easiest way to do it because of who I am,” Goff told me. “I really don’t worry about what other people say. But yeah, sure, I think after last year, mostly just the losing, how many games we lost, that puts a chip on your shoulder and that puts the O.K., I don’t ever want to go through this again on you. And I am the quarterback [of] this team. I am the leader, and it does fall on me.

“And I don’t take that lightly. And I think this year has been fun for me to really settle in in an offense that I really feel comfortable in. I’m thankful for these coaches and these players. So yeah, it definitely does drive you a little bit, but at the same time I definitely motivated myself, with or without what other people think.”

• While we’re there, I did ask Joe Flacco whether he still sees himself as capable of being a franchise quarterback—while those days may seem long gone, it’s interesting that the guy he was drafted alongside in 2008, Matt Ryan, remains an entrenched starter. The answer was logical, and perfectly Flacco.

And as for the fact that he’ll have to hand the reins back to Zach Wilson in a few weeks?

“I’m just grateful for the opportunity to get the chance to put our team in a good position over the first couple of weeks,” Flacco said. “I’m not looking past any of that or doing anything else. I’d be doing myself a disservice, and more importantly, I’d be doing our team a disservice. The most important thing for me is to go out there and do my job and, like I said, put us in position to win football games.”

You can’t say he didn’t do that on Sunday.

• My buddy Ian Rapoport over at NFL Network reported on Sunday that Tom Brady will be given Wednesdays off this season as maintenance days. Bucs coach Todd Bowles confirmed that on Monday, saying it’s part of a larger management plan for all his older guys.

First off, an important point—I’m told the plan is to have Brady in the building, just not practicing, on Wednesdays, which means he’ll be there for game-plan installation with all the other vets getting days to rest their bodies. And I can also say that Bowles certainly isn’t pulling this thing out of thin air. He and I talked about this a few weeks back, and it’s actually a measure based on how last year ended for the team.

“Our whole thing is how we finished the season,” Bowles told me. “And when you don’t go as far as you went the season before, where we won the Super Bowl, you try to tweak some things. We were run down at the end of the year. After the Super Bowl year, we got a lot of people hurt during the year, so even though we won 13 games, we were mixing and matching all year. So health was a big thing; we tried to ease back some of the veteran days.

“And Bruce did it as well, but we did more of it because we didn’t go as far. And they took care of their bodies better. But I was giving guys assigned days even more so than we were in the past and making sure when the heat index went to a certain amount, certain guys got to be able to cut back on certain reps. I was really monitoring that from a health standpoint.”

Bowles then continued with his global view of these things.

“Common sense is important, because I know how much we need these guys during the year,” he said. “And that subtle part of it, just being an ex-player, you can see who does what, when they’re tired, when they’re not. I’m a very good observational guy—Bruce has told me that. My thing is, What can we do better? Not to take away the things we were doing great, but to add on to it, and to tweak some things to what we can do better, because we didn’t win the whole thing.”

So, really, Bowles is prioritizing having guys in the right place physically and mentally when fall turns to winter, and the Bucs are driving to win a second title in three years. And having his quarterback right is, obviously, a big piece of that.

• One more thing on the Bucs—GM Jason Licht has routinely watched games from the sideline over the years. So while a non-coaching staffer, like Bruce Arians, would be on the field might be unusual for some teams, it really isn’t for Tampa (COVID-19 restrictions may have temporarily affected that, but those are gone now).

• I thought this was an interesting nugget, one I raised on TV on Sunday morning: The Steelers had senior defensive assistant Brian Flores sit in on offensive meetings last week and consult with coordinator Matt Canada as Canada put the team’s game plan together. It makes sense, of course, because of Flores’s institutional knowledge of the Patriots’ defense, and it also reflects the level to which Flores is contributing in Pittsburgh.

My understanding is his role is a lot like Teryl Austin’s was last year, before Keith Butler retired and Austin assumed his role as coordinator. Flores is a sort of over-the-top assistant on that side of the ball and works with the off-ball linebackers extensively. He’s helped the team get more out of former first-rounder Devin Bush, integrate veteran Myles Jack and develop promising rookie Mark Robinson.

So his role’s been wide-ranging and reflects the diversity of expertise Flores has as a former head coach. Those in the building are hopeful he’ll get another shot to be one, too, because they’ve gotten a good look at how good he is over the last eight months. I’d hope he learned, too, from the experience in Miami, the same way, say, former colleague Josh McDaniels learned from his failures in Denver.

• Some people have wondered why tonight’s MNF lineup isn’t a traditional doubleheader—Eagles-Vikings will be kicking right around when Bills-Titans goes to halftime. Why didn’t the NFL stack the games? We broke down the reason in the MAQB in May, but really there are three factors. One is that the 10:15 p.m. ET kickoffs didn’t rate well. Two is that having three sets of these (starting next year) allowed the league to sell MNF as a 20-game package, while letting the network sort out the overlap on its own. Three is the time-zone issue, with just six teams to pick from that play home games in Mountain and Pacific time (workable if you’re scheduling one such game, complicated when it’s three).

• Silver lining on a crappy day in Cleveland: The Browns went over 180 yards rushing for the second straight week. That’s a pretty remarkable fact, given that, with their starting quarterback out and a revamped receiver corps, opponents have every opportunity to load the box up on Kevin Stefanski’s crew.

• The NFL couldn’t have asked for a more exciting two-week start to the season. Eventually, we’ll get that dud of a Sunday. But I was up until 7 a.m. working through the MMQB this morning for a reason—there were so many people to talk to, and so much to get to, in recapping the day. I’m sure all that’ll be reflected in the ratings. As it should be.