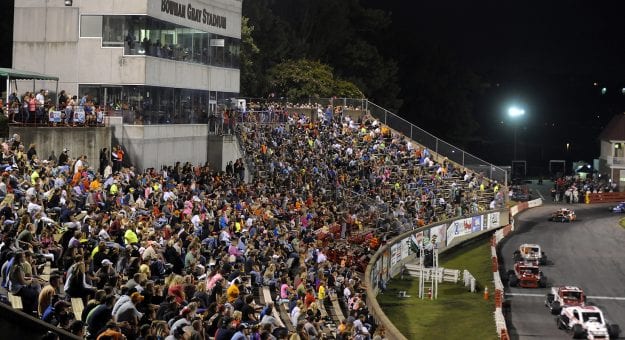 DAYTONA BEACH, Fla. – TrackPass on NBC Sports Gold announced today it will exclusively air Bowman Gray Stadium’s return to racing live on Saturday, June 5. The Winston-Salem, North Carolina, short-track, known as “The Madhouse,” will host the Hayes Jewelers 200 (a 200-lap Modified contest), along with Sportsman, Street Stock and Stadium Stock division events. It marks Bowman Gray’s first on-track action since August of 2019. The venue’s 2020 season was cancelled due to the COVID-19 pandemic.

Additionally, TrackPass will air live racing from Bowman Gray on Saturday, July 24. The night’s events include the Colors Edge Sportsman 100, a chain race, and competition from the Modified, Street Stock and Stadium stock divisions.

“Bowman Gray Stadium is one of the most storied tracks in the history of NASCAR and represents everything that is great about weekly racing,” said Brandon Igdalsky, NASCAR managing director touring series. “It’s a big win for fans across the country to see the Bowman Gray racing on TrackPass and hopefully experience the energy there in person one day.”

A who’s who of NASCAR legends have competed at Bowman Gray, including Junior Johnson, Richard Petty, Glen Wood, David Pearson, Richie Evans and Jerry Cook. Petty won his 100th career race at Bowman Gray, while Richard Childress sold concessions at the track before purchasing his first car to run there. Racing dynasties that are part of Bowman Gray’s lore include, the Pettys, Allisons, Myerses and Earnhardts.

This season, 10-time champ Burt Myers and 10-time champ Tim Brown will once again be battling for the title – with challengers such as James Civali, Brandon Ward, Jonathan Brown, and Jason Myers vying for the crown as well.

“We’re excited to get back to racing in 2021 and can’t wait to bring the action of the Madhouse once again to fans – both in person and online through TrackPass on NBC Sports Gold.”