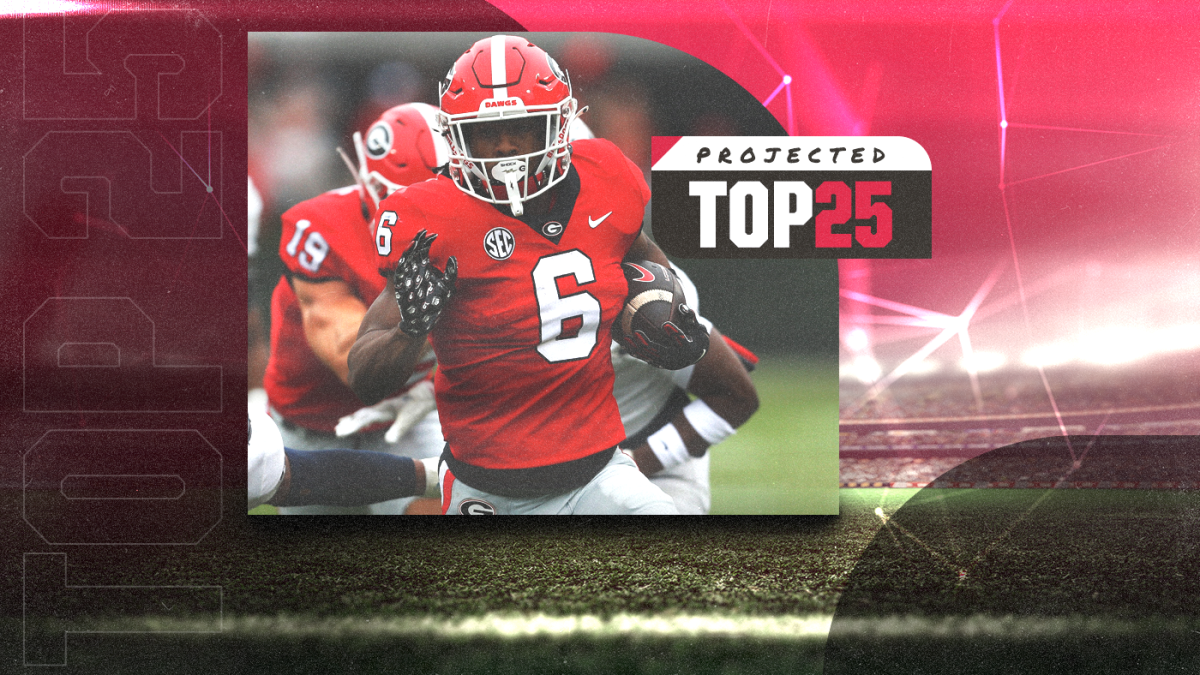 The college football rankings are set for a major shake up when the AP Top 25 is updated Sunday as the voters have to react to numerous massive upsets that happened (as well as other upsets that almost happened) during a wild Week 2. Three top 10 teams lost on the same day (two of them to Sun Belt opponents) but it was a near-upset in Austin, Texas, that could lead to the most headline-worthy change in the rankings.

No. 1 Alabama kicked a game-winning field goal with 10 seconds remaining to escape with a 20-19 win over unranked Texas and claim a victory over a Longhorns team that lost starting quarterback Quinn Ewers to injury in the first quarter. The fact that the ‘Horns pushed the Crimson Tide to the limit could actually garner more votes for Steve Sarkisian’s team than it received last week when Texas finished 28th team in voting points. On the other hand, Alabama’s sloppy showing (15 penalties!) as a 20-point favorite to a previously unranked team is likely to impact its standing as the top team in the country.

Some of Alabama’s first-place votes from the preseason rankings already went Georgia’s way after the Bulldogs’ Week 1 win against Oregon. If the Tide lost votes to the reigning champions while winning 55-0 against Utah State, they’re almost certainly going to drop more after Georgia topped Samford 33-0 in Week 2. If Georgia does not end up jumping to No. 1 as we’re predicting, the margin will be significantly closer. Alabama may remain No. 1, but the notable gap that existed in the preseason has closed. From here on out, each week is a referendum on who is No. 1 until one of the top three teams takes a loss.

The most uncertainty exists further down the rankings as voters will try to determine where No. 6 Texas A&M and No. 8 Notre Dame should land after taking respective major upset losses as double-digit favorites against Appalachian State and Marshall in Week 2. Falling to an unranked team at home is grounds for getting dropped from the top 25 altogether after most weeks, but additional losses by No. 12 Florida, No. 17 Pittsburgh, No. 19 Wisconsin and No. 25 Houston have made the rankings much more fluid.

Here’s how we believe the new AP Top 25 poll will look Sunday.

1. Georgia (Last week — 2): The Bulldogs have now outscored their first two opponents 58-3 in the first half alone, cruising to comfortable, depth-building wins against both Oregon and Samford. Georgia is operating with ruthless efficiency, and it’s a level that no one else in the country has displayed as consistently so far this season.

2. Alabama (1): It’s possible that the Tide hold on to No. 1, and they will certainly receive a good amount of first-place votes, but there are more pressing issues than whether the team is No. 1 or No. 2 in a given week this early in the season. The offense around Heisman Trophy-winning quarterback Bryce Young has to improve, and the team as a whole cannot commit 15 penalties in a game the way did against Texas.

3. Ohio State (3): No changes from the voters following a 45-12 win against Arkansas State, but after a tough outing in the opener against Notre Dame, the Buckeyes offense did get to stretch their legs a little with four C.J. Stroud touchdown passes — three to Marvin Harrison Jr. — despite having both Jaxon Smith-Njigba and Julian Fleming sidelined with injuries.

4. Michigan (4): The Wolverines rolled against Hawaii and after the game Jim Harbaugh named J.J. McCarthy as the team’s starting quarterback.

5. Clemson (5): There are not going to be any major takeaways for voters after a 35-12 win against Furman.

6. Oklahoma (7): An early scare against Kent State leveled out after halftime as the Sooners defense led the way while the offense found its footing in a 33-3 win.

7. USC (10): When will the Trojans play a team that can limit their offensive firepower? Stanford was not up to the task as USC scored five touchdowns before halftime then cruised to a 41-28 win on the road to open up Pac-12 play.

8. Oklahoma State (11): Early on, it looked like Arizona State was going to add to the list of unranked teams to go on the road and take down a top team, but the Cowboys found their footing and pulled away in the second half to remain undefeated.

9. Michigan State (14): Two straight wins against the MAC might not flash for some voters, but a well-rounded 52-0 win on Saturday against Akron bodes well for their fortunes ahead of a road trip to Washington in Week 3. Given the losses ahead of them, the Spartans are poised for a move up.

10. Arkansas (16): A bruising rushing attack and early lead helped power the Razorbacks to their first SEC win of the season as they held off a second-half charge from South Carolina in a 44-30 win.

11. Kentucky (20): This Wildcats team was able to do what Utah could not — go into into The Swamp in primetime and emerge victorious in a hard-fought 26-16 win over the Gators. The win marked Kentucky’s second straight win over Florida (an occurrence that had not happened since 1976-77) and third such victory across the last five meetings in the series. The Gators had won 31 straight prior to the ‘Cats recent surge.

12. Florida (12): The win against Utah now serves as a nice floor in the AP Top 25 as long as Florida remains a one-loss team. Now the challenge for Billy Napier and the Gators will be to recenter after this loss and make sure they remain a one-loss team for as long as possible. Anthony Richardson had a disastrous outing after his breakout performance in Week 1.

13. BYU (21): This might be a little high for the Cougars’ projections, but that would only be a result of the double-overtime win against a top-10 ranked Baylor finishing in the early Sunday morning hours for may AP voters. The profile is strong, but the strength of this team is the reason to think this impressive campaign could continue, even with Oregon on deck next week.

14. Utah (13): A 73-7 blowout win against Southern Utah will go a long way in flipping the mood around the Utes program after a tough road loss at Florida in the opener, but it won’t change their standing in the rankings too much.

15. Miami (FL) (15): It wasn’t pretty early — with some boo birds coming alive in the second quarter — but the Hurricanes pulled away late for 30-7 win against Southern Miss.

16. Tennessee (24): Taking down Pitt in overtime has poised Tennessee to be one of the signifiant risers in the bottom of the rankings. Since the Volunteers were unranked in the preseason and just cracked the top 25, there’s probably a ceiling to their landing spot this week, but that ceiling is likely close to where Pitt was ranked heading into the matchup.

17. NC State (18): After scoring just three touchdowns and winning at ECU thanks to a couple missed kicks, ACC Preseason Player of the Year Devin Leary accounted for six touchdowns (four passing, two rushing) in a 55-3 win against Charleston Southern.

18. Ole Miss (22): Things were a little tighter than some may have expected against Troy, but Ole Miss left no doubt in a dominant 59-3 win against Central Arkansas.

19. Wake Forest (23): The return of Sam Hartman brought plenty of offensive highlights in a 45-25 win at Vanderbilt.

20. Penn State (NR): A 46-10 win against Ohio will move the Nittany Lions from just outside the top 25 into the 20s and set up plenty of excitement for next week’s road trip to Auburn.

21. Texas (NR): If Texas weren’t so close to the top 25 in last week’s balloting, it would be unlikely that the Longhorns could lose and still move up in the rankings. However, last week’s placement suggests they are already a top 25 team in the eyes of many and Saturday’s performance against Alabama suggests they are worthy of that consideration.

22. Oregon (NR): After tumbling all the way from No. 11 to just outside the rankings, a comfortable win against Eastern Washington should garner the few extra voters the Ducks need to get back into the top 25.

23. Baylor (9): The Bears are due for a drop in the rankings after falling in double-overtime to BYU, but that defeat, especially on the road, is not enough to add Baylor to the list of ranked teams in danger of being bounced from the top 25.

24. Kansas State (NR): A dominant win against Missouri might draw some more attention to the 2-0 Wildcats, who did show up on enough ballots last week to be well-positioned for a top 25 breakthrough following a win against an SEC opponent.

25. Pittsburgh (17): It’s possible that the Panthers suffer the same fate as the other ranked teams projected to drop out of the rankings, but the overtime nature of the loss to a team that’s likely moving up could keep them on enough ballots to remain right around No. 24 or No. 25.