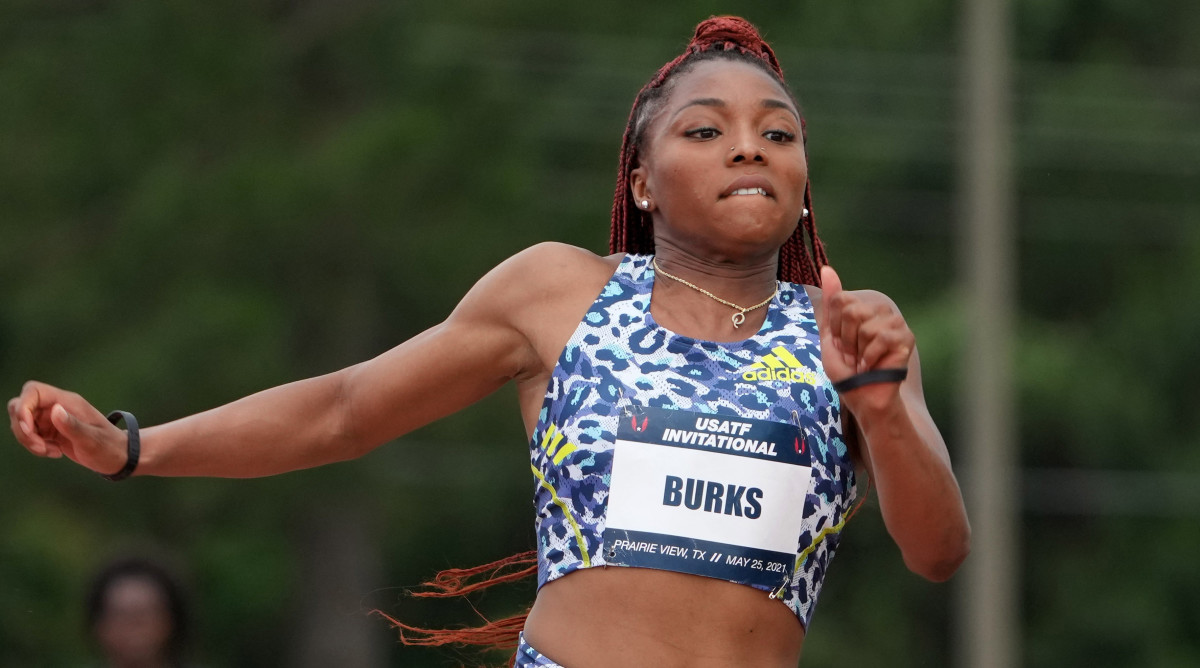 Quanesha Burks ordered medium fries with no salt and a side of sweet and sour sauce at McDonald’s. She doesn’t do this often, but the day after making her first Olympic team, she decided to treat herself.

“I just ate it with so much gratitude in my mouth,” Burks says.

Before Burks was a full-time professional long jumper, her only previous job experience was working at the McDonald’s in Hartselle, Ala., as a 17-year-old. The town of 14,000 people was also where she and her siblings were raised by her grandparents. She remembers the early years as a struggle, watching her family live paycheck to paycheck. Her days would start at 4:30 a.m. taking her grandmother to work at the local nursing home, which was 30 minutes away from their house. Upon returning, she’d wake up her sisters and get them ready for school before dropping them off and then attending her own classes. After school, it would be practice and then work.

“When I worked at McDonald’s, I thought it was the best job ever,” Burks says. “I was making $100 every two weeks. It’s terrible, but I came to work every day happy and I knew it was all part of my goal to go to college.”

While at Hartselle High School, Burks quickly took notice of her classmates using sports as a way to get college scholarships. A family friend bought her shoes to play basketball and she had dreams of playing for Pat Summit at Tennessee. When track season rolled around, another friend encouraged her to try out and bought her spikes to compete in the sprints and jumps. When she finished third at the 2012 USATF National Junior Olympics, she decided to stick with the sport for her college aspirations.

“I remember looking up the requirements to earn a full scholarship and I wrote those goals down,” Burks says. “I jumped 20 feet and that’s when everything changed.”

Practice would wrap up before she needed to be at McDonald’s at 4 p.m. and working until 10 p.m., the latest high school students were permitted. On the weekends, she worked the early-morning shifts. All of her money would go toward helping her grandmother pay off her car insurance.

Burks’s determination to support her family nearly cost her the scholarships she was hoping for. Then Mississippi State coach Steve Dudley couldn’t find Burks at home for an at-home recruiting visit, so he went into the McDonald’s and waited until her break to talk with her. Alabama coach Miguel Pate called her multiple times while she was working the drive-thru, and she’d keep any recruiting calls brief and promise to call back coaches whenever she was free.

“Coach Pate actually had to sit me down with my high school coach, Kenny Lopez, and guidance counselor so I could understand how my life was going to change and I wouldn’t need to work at McDonald’s,” Burks says.

Burks didn’t quit her job until she graduated high school with her 11 state titles, including the 100 meters, long jump and triple jump sweep as a senior. At Alabama, she became the first in her family to attend college and went on to have a successful career by setting school records, earning All-America honors and winning the 2015 NCAA outdoor and 2016 NCAA indoor long jump titles. (The accolades section of her bio on RollTide.com has 27 bullet points.) Her next full-time job would be as a professional jumper.

But the past few years as a professional have not been easy for Burks. In 2018 she finished fourth at the World Athletic Indoor Championships and missed the podium by 0.04 meters (1.5 inches). A year later, she lost her grandfather, whom she describes as “the only dad I had in my life,” a week before the USA Outdoor Track and Field Championships. He was buried on July 25, 2019, and she boarded a plane to Des Moines and competed two days later, but she failed to record a successful jump and missed the 2019 World Championships.

Burks rebounded on Feb. 15, 2020, when she won the U.S. indoor title, but the World Athletics Indoor Championships in Nanjing, China, were canceled and the COVID-19 pandemic soon wiped away the entire outdoor campaign. Like most professional track athletes, she continued training until a bone bruise in her femur this past February,  sidelining her for 11 weeks without any running or jumping.

While her competition was notching the Olympic standard and earning points in the World Athletics’ ranking system, Burks watched idly and took to TikTok to verbally manifest that she was going to make the Olympic team.

“It felt like all the odds were against me,” Burks says. “At one point, my coach told me, ‘I don’t know if you’re going to physically be able to go to the trials. The doctors didn’t know if I would be back in time. I was seeing some specialists and they didn’t have much hope in me at all. I was facing so much, but I kept going back to when I worked at McDonald’s. I had my goals set and I knew I could do it.”

Although the bone bruise in her takeoff leg was still severe, she was trending in the right direction with a season-best 6.85 meters just three weeks before at a meet in Chula Vista, Calif. Burks entered the trials with a personal best of 6.93 meters, but she had not jumped that far since 2015. She entered the competition with the Olympic standard but only secured it in her final competition before the trials. Before that jump, she was ranked 11th in the U.S. in ’21.

The qualifying round of the long jump went well, with Burks securing her spot in the final on her first jump. She would enter the final with the second-best jump in the field, but the favorites set the tone early, with two first-round jumps more than 6.90 meters. Burks put together a solid but unimpressive series through four rounds as her marks were not quite podium-caliber. In the fifth round she finally put it together and moved from sixth place into third with a lifetime personal best of 6.96 meters. She would hold onto that spot and make her first Olympic team.

Brittney Reese won her 13th U.S. title with the U.S. Olympic Trials win and heads to her fourth Olympics looking to add another medal to her collection after taking gold in London in 2012 and a silver in Rio in ’16. NCAA champion Tara Davis took second, and continues to solidify her presence as the next U.S. jumps star with a booming social media following that includes 166.7K TikTok followers, 209K Instagram followers and 265K subscribers on a YouTube channel she shares with boyfriend and Paralympian Hunter Woodhall.

Whereas Reese and Davis have been successful at the high end of the sport for years, Davis believes her career progression may be a bit relatable to those still giving the sport an honest shot after college.

“Brittney has all the accolades,” Burks says. “Tara has good support. She’s an icon and an entertainer. I didn’t have everything laid out for me. I didn’t have all the eyes on me. I feel like still to this day I get overlooked. That’s O.K. I just know it all starts with your confidence within. Everything I’ve become is because of my mindset and my determination.

“It’s been a journey and it all started with a little girl working at McDonald’s and here I am.”

More Coverage of the Olympics: