Tokyo Olympics: A Brief Guide to Every Sport 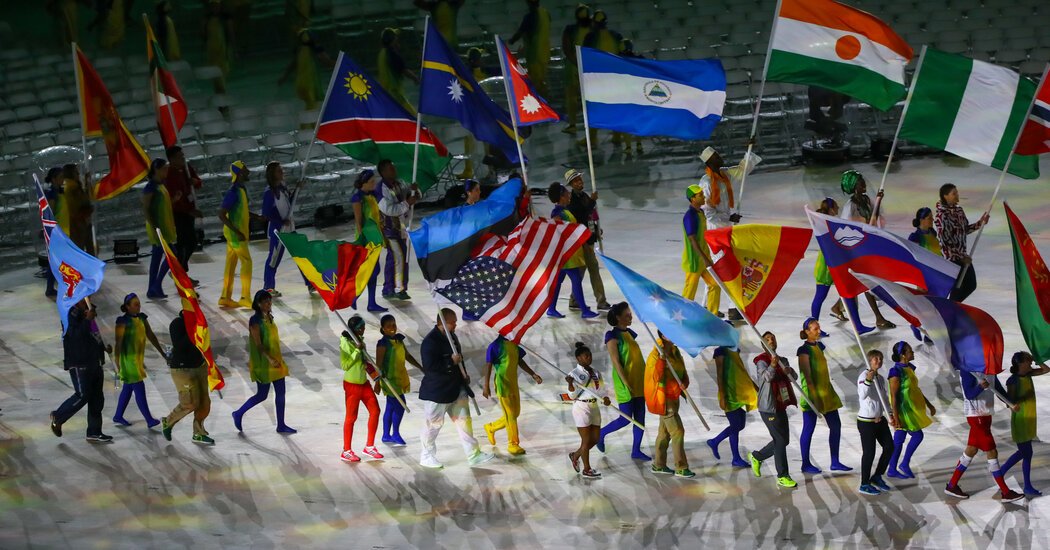 Here’s the lowdown on every sport, including the Olympic debuts of surfing, skateboarding, karate and sport climbing.

It’s a little different than at summer camp: The archers try to hit a bull’s-eye that is about the size of a grapefruit from 70 meters away. South Korea is the dominant team and has won all eight women’s team gold medals since the event was added in 1988. Brady Ellison of the United States, who has two silver medals and a bronze in his career, will be aiming for his fourth Olympics.

The sport was formerly known as synchronized swimming. Russia has been the top team for many years. Although coed duet competition has been added at the world championships, the Olympics is still for women only.

This sport of rackets and shuttlecocks is dominated by Asian countries: 32 of 34 golds in history have been won by that continent. Indonesia, a nation of 270 million, has won seven Olympic gold medals, all of them in badminton — the sport is part of the national identity.

Both competitions are returning for the first time since 2008. Cuba has made the final in all five Olympic baseball tournaments. The United States has won three of four softball golds. Major League Baseball players, otherwise occupied, will not be participating in the tournament.

The American men have won six of the seven gold medals since professionals started playing on the Olympic team in 1992. The U.S. women have won eight of the last nine golds.

Three-on-three basketball for men and women has been added this year. The United States men and the Chinese women are the reigning World Cup champions in that sport. The American men’s team for qualifying events has consisted of players from the G League and European leagues. The American women have been WNBA players.

The women’s competition has expanded to five weight classes, from three. Russia and former Soviet countries like Uzbekistan have been at the top of the sport in recent years.

Canoers use a one-bladed paddle and kneel in the boat. Kayakers use a two-bladed paddle and sit. The canoe sprint takes place over a flat, straight, calm course. In canoe slalom, paddlers snake through gates in river rapids. In 2019, Nevin Harrison became the first American to win gold in the world championship canoe sprint. Conveniently, her event is being added for women to the Tokyo Olympics.

The sport has four separate disciplines at the Olympics. In road cycling, the same riders who contest the Tour de France compete. In track cycling, riders race around a banked oval at high speeds; new this year is the Madison, a sort of tag-team race for two riders. In BMX, riders race over a quick, bumpy course or perform tricks in the new freestyle competition. In mountain biking, riders traverse a long, hilly cross-country course.

There are three types of equestrian competitions at the Games. Dressage is almost like dancing on horseback, as riders are judged on precise movements by their mounts. In jumping, horses clear high hurdles. Eventing includes both dressage and jumping, and also adds a grueling cross-country race over hurdles.

Many of the top players in the world will compete at the Kasumigaseki Country Club. Justin Rose of Britain and Inbee Park of South Korea won four years ago in the sport’s return to the Olympics after a 112-year absence.

With the retirements of the American swimmer Michael Phelps and the Jamaican runner Usain Bolt, Simone Biles may be the most visible athlete at the Games. The winner of four golds in 2016, she will have a chance at six this year, in the team event, individual all-around, and four apparatus finals.

Judo, a martial art focused on grappling, provides a great medal-winning opportunity for the host country. Japan historically has more than double the golds of the next closest country, and also had the most golds at the 2016 Games. The heavyweight Teddy Riner of France will be going for a third straight gold medal and fourth straight medal over all. A coed team event has been added this year.

Karate debuts at this Olympics. There will be six gold medals awarded in kumite, in which athletes spar against an opponent, and two in kata, a solo event in which judges evaluate competitors’ stances and movements. Japan won the most medals at the latest world championships.

It is a quirky sport that was invented for the 1912 Games in Stockholm. Athletes compete in swimming, fencing, equestrian jumping and a combined pistol shooting and running event, all in one day. Though the sport is hardly “modern,” its name comes because it is newer than the pentathlon of the ancient Greeks. The United States has won six silver medals in this sport, but never a gold.

In this women-only event, both individual athletes and teams of five perform with balls, hoops, clubs and ribbons. One piece of equipment is omitted each Games: This time the rope will be left out.

There are two types of boats. In sculling, rowers have two oars each. In sweep rowing, each rower has just one oar. The American women’s eight has won three straight Olympic gold medals, but finished third at the last world championships behind New Zealand and Australia.

At the Olympics, rugby is played with seven players on each side in a fast, free-flowing version of the game. Fiji won the inaugural men’s event in 2016, its first medal of any kind at any Games. Australia won the women’s event.

There are events for rifle, pistol and shotgun. Three coed team events have been added this year. A live pigeon shooting event held in 1900 did not return, and that competition is now considered unofficial.

In this judged event making its Olympic debut, gold medals will be available in street and park disciplines. The street arena is designed to simulate a city street, with stairs, railings and benches for performing tricks. The other event resembles a local skate park, with deep bowls and curves to negotiate, setting up midair tricks.

The best women in the world will be at the Games, including the World Cup-winning Americans. The U.S. men failed to qualify for a third Games in a row. The men’s competition is mostly limited to players under 24. Still, the historical roster of gold medalists includes big names like Lev Yashin (U.S.S.R.), Pep Guardiola (Spain), Samuel Eto’o (Cameroon), Lionel Messi (Argentina) and Neymar (Brazil).

Each competitor will be tested in three separate disciplines in this debut sport. Their combined performance will determine who wins the medals. In speed climbing, athletes race up a wall as fast as possible, usually in less than 10 seconds. Lead climbing is based on how far up a challenging wall competitors can go before they fall. In bouldering, competitors climb without ropes or harnesses.

The Olympic debut for surfing will be held in the relatively tame waves off Chiba, Japan. Many of the best athletes from the World Surf League will be on hand, but the surfing legend Kelly Slater, 49, barely missed qualifying.

Numerous stars should make for a compelling meet. Among the Americans contingent is Simone Manuel in the freestyle sprints, Katie Ledecky at long distance, Lilly King in the breaststroke and Caeleb Dressel in freestyle and butterfly. Also expected to be returning to the pool are Katinka Hosszu of Hungary and Daiya Seto, the host nation’s prime hope for a medal, in the individual medleys.

In the relays, get ready for another round of the Americans versus the Australians. Plus, there’s marathon swimming at the Odaiba Marine Park.

Don’t expect too many surprises: China has won every gold medal in this sport in each of the last three Olympics.

This punching and kicking combat sport has been dominated by South Korea and China. But many countries have top contenders: In 2016, athletes from Ivory Coast, Jordan, Azerbaijan, Thailand, Niger and the Dominican Republic all won medals.

It’s not the American version of handball, involving bouncing a ball off a wall. Instead it’s a fast-paced team sport, something like indoor soccer, but with players throwing the ball at the goal. The American men and women did not qualify. European teams, and perhaps the South Korean women, will vie for gold.

The big stars will be on hand, but the tournaments can yield surprises. Steffi Graf, Serena Williams, Andre Agassi, Roger Federer and Rafael Nadal all have Olympic gold medals. But so does Jack Sock.

Usain Bolt may have retired, but track, which the Olympics refers to as “athletics,” will still be a marquee event. International stars expected to be on hand include Shelly-Ann Fraser-Pryce of Jamaica in the sprints, Sifan Hassan of the Netherlands in the middle distances, and Armand Duplantis of Sweden in the pole vault.

The strong American contingent could include Noah Lyles in the sprints, Donavan Brazier at 800 meters, Christian Taylor in the triple jump, Dalilah Muhammad in the 400 hurdles and the ageless Allyson Felix in the 200 in what would be her fifth Games.

The marathons and race walking have been moved to Sapporo, Japan, where it is expected to be cooler than Tokyo.

China and host Japan will be the favorites to bounce their way to gold. It’s a high-pressure event: After a few warm-up bounces, the competitors must consecutively perform 10 tricks without a break.

The two-hour swim, cycle and run is grueling, although not as much so as the eight-hour Ironman race in Hawaii. Besides the men’s and women’s races, there will be a coed relay this year.

In indoor volleyball, a six-a-side game, the United States will be hoping for a medal in both the men’s and women’s events. The other contenders come from nearly every continent: On the men’s side, they include Poland and Brazil; on the women’s side, China and Serbia. In beach volleyball, for teams of two, April Ross of the United States has a silver and a bronze in the last two Games and will be looking to complete the set after turning 39 in June, this time with Alix Klineman as her partner.

The U.S. women’s team has been absurdly dominant, winning the last two Olympic golds and the last three world championships with ease. Teams from Europe should dominate on the men’s side.

Sarah Robles won a bronze medal in the top weight class in Rio, the first weight lifting medal for the United States since 2000. Since then she has won a world championship and could contend again.

There will be competition in several kinds of boats. The RS:X is a sailboard, the Laser and Finn are one-person dinghies, the 470 is a two-person dinghy, the 49er is a skiff, and the Nacra 17 is a multihull catamaran. Wealthier countries located on the water like Australia, New Zealand and those in Western Europe tend to perform best. But Croatia did win a 2016 gold.