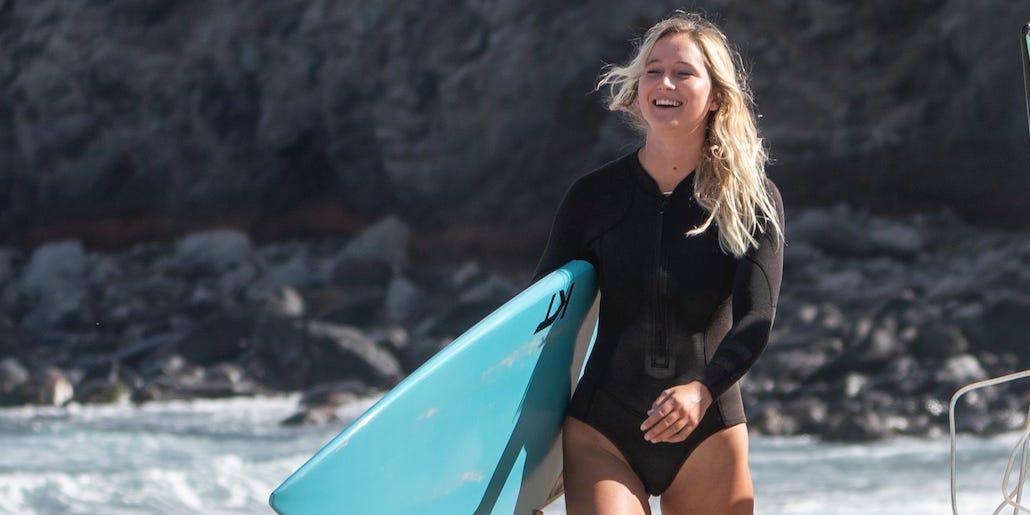 Annie Reickert is ready to become the next face of water sports.

The 18-year-old surfing prodigy has her sights set on becoming the best “Water Woman” on the planet by excelling in a variety of water sports — including different types of surfing, stand-up paddle boarding, and more.

Reickert just finished competing in Red Bull Magnitude, the first-ever women’s only big-wave contest. She spoke to Insider about the virtual event, elevating women’s water sports, incorporating surfing into the Olympics, and where she sees her own career heading in the future. Check out what the up-and-coming water athlete had to say below:

This interview has been slightly edited for clarity.

When did you first start surfing, and how did you get involved in the sport?

I started surfing when I was two years old on the front of my parents’ board. My dad would always take me out on the West side of Maui — which is where I was born and raised — in tiny little knee-high waves. He’d hold me on the front of his board, and I’d stand up. So we always have had family surf Sundays, so we’d spend all day on Sundays surfing in the ocean.

I’ve always grown up in the water and just had a love for the ocean since a young age. And it’s not just surfing for me. There’s a couple of different sports that I love to do in the water.

What else do you do beyond the surfing most of us are familiar with?

My main ones right now are probably the big-wave surfing and short boarding, so just surfing as a whole. And then I love to stand up paddle. I love foiling. I don’t know if you guys have heard of it, but it’s like you have an airplane underneath your board, and it makes you hover above the water. It’s a wild thing if you haven’t ever seen it. I love to stand up paddle surf, downwind race, and then foiling for me has been really fun too.

It’s kind of a weird thing for me, especially in water sports and being a female in water sports. There’s a lot of guys that call themselves water men — that’s the term. And for me, that’s kind of my goal. I want to be a water woman, so I want to be at the most elite level in all of these different sports. At this point, that’s where I’m getting to.

I’ve foiled across the Ka’iwi Channel from Molokai and Oahu, and I’ve been the only female to do that. And I think there’s only been a handful of guys to attempt it with me. And the racing stuff and the stand-up paddling side of things — I compete in all of that. And I’ve been in the top four or five in the world before COVID hit. I’ve just recently had the opportunity to start competing in big-wave surfing, and I found myself loving that and also being able to compete at a high level. It was like a natural gravitation from when I was younger and now getting to the point where I can compete on the top level.

At what point did you realize, “Okay, I’m really good at this,” and that water sports was something that you could compete in at the highest levels? When did you first have an inkling that that could be the case?

I was just always a super athletic kid, and I loved nature and the ocean and picking up all these sports. It was just something I did for fun. And then it was probably around when I was, I’d say, like 12 or 13. I told my parents I really wanted to start competing in stand-up paddling. Like I’d love to try and just experience that competitive side of things because I’ve always been a competitive person through all aspects of life.

And they supported me with that, and I had the opportunity to go. From there, I started to compete in these different sports as well. And I just worked my way up level by level. But I think it was probably around the age of 12 or 13. I’ve gravitated towards more of that stuff ever since then.

How was your experience competing in Red Bull Magnitude?

The whole thing is such a unique opportunity, especially because it’s joining in so many different females from across Hawaii who wants to surf big waves. Unfortunately, on Maui, it’s notoriously one of the windiest spots on the Hawaiian islands, which is good for wind sports and good for me in that sense, but for surfing big waves, you don’t want a lot of wind. It makes it that much harder to drop down the face and make the wave, and it creates bumps, and it just adds a whole new level of difficulty.

It’s been tricky to find the right window to get out there and get waves because for Red Bull Magnitude it’s only paddling in big wave, so you’re pushing yourself, you have no jet ski assistance, you’re getting yourself in those waves. But I’ve been out there a couple of days, and I’ve caught a couple fun waves. I don’t think anything record-breaking, but I’d love to get a wave in Red Bull Magnitude, and I’d love to potentially win something in this contest.

How big is having this event for the growth of women’s big-wave surfing?

How much does it mean for surfing to be debuting in the Olympics this coming summer?

Where is the coolest place you’ve surfed?

That’s a hard one. I’ve been able to surf in Denmark, which for me was really cool because it was really, really cold, and growing up in Hawaii, I’ve definitely been soft when it comes to that. One of my favorite spots was Fiji. It’s the pinnacle of surfing, and there’s definitely a lot of history around that place, but the water there is gorgeous and tropical, and the reefs are amazing.

I stand up paddled in Thailand, and that was really, really cool too. It’s just such a different culture, and it was so beautiful. I went on a family trip to Cambodia and to see the temples too. I still remember that so vividly.

What made you want to attempt stand-up paddling 32 miles across the Ka’iwi Channel?

Growing up in Hawaii, the channels in between the islands have so much power and this glow around them. And I’ve always loved down winding, which is what you do in between the channels. You have the wind at your back, and the wind makes swell on the water, and you follow the swell, and you surf down the coast on these big, long race boards.

The ultimate challenge and the ultimate way to test your limits on down winding is to cross these channels. So the first one I did, I believe I was 13. It wasn’t the Ka’iwi Channel. It was in between Maui and Molokai, which is about 28 miles. But the Ka’iwi Channel is known as the most challenging and treacherous — in English, it translates to the channel of bones. It’s definitely no small feat when I was like, “Hmm. I think it’s probably a good idea like I should probably try and cross this channel.”

It’s really, really wild to be so far in between any two islands that you can’t see land on either side. It’s amazing to feel the power out there. At that point, it’s just you and the ocean, and you’re just trying to harness the power of the ocean to get you across this channel. I think most people would think that you’re insane for trying to do it, but it’s something that when you come out the other side, you just feel indestructible.

Between crossing a channel and catching a huge wave, how much fear do you have to conquer?

There’s definitely a sense of fear. If you aren’t a little scared of what mother nature is throwing at you, I think you might be insane. I think everyone out there is definitely afraid of the wrath of mother nature and just all the power that’s out there in that lineup and also in trusting channels. But it’s almost like an adrenaline junkie kind of thing. Being out there and being in a place that the ocean is so uncontrolled and you’re at the mercy of mother nature, it’s really rewarding when you come out the other side.

So the fear factor is part of it. It’s learning how to figure out why you’re scared and say, “I can do this, I can overcome this. This is why I’ve trained. This is why I put all this time in.” It’s a balance of deciding if you’re terrified because it’s really dumb idea or as part of the reason that we love to do it.

The morning of the race was crazy because there was flash flooding. But the stuff I saw in the water — I will never forget that. It was entertaining and really disgusting. Take what you see on the streets and then imagine that floating around you. Thankfully I didn’t fall in the water, but I think I would still be glowing to this day if I did.

I’ve paddled around the Statue of Liberty too, which was really cool. I did a race in Paris in December, and then I’ve raced in London. I think I’ve paddled in pretty much like the world’s grossest rivers. And I’ve also paddled in Japan. It’s been wild to compare being in the ocean where there’s only water surrounding you and then being in these cityscapes surrounded by buildings and bustling human life.

Looking ahead, what are some of your personal goals?

I want to be the best water woman out there. That’s a hefty goal, but it’s something that I’d really love to achieve. In terms of big-wave surfing, I would love to be one of the best females. I want to continue to inspire people to get out there and just continue to push my level and see where I can go. And I’m hoping that if these contests continue to happen, I’d want to win one of them one day, that’s a goal of mine. I’d love to invest more time into competing in these.