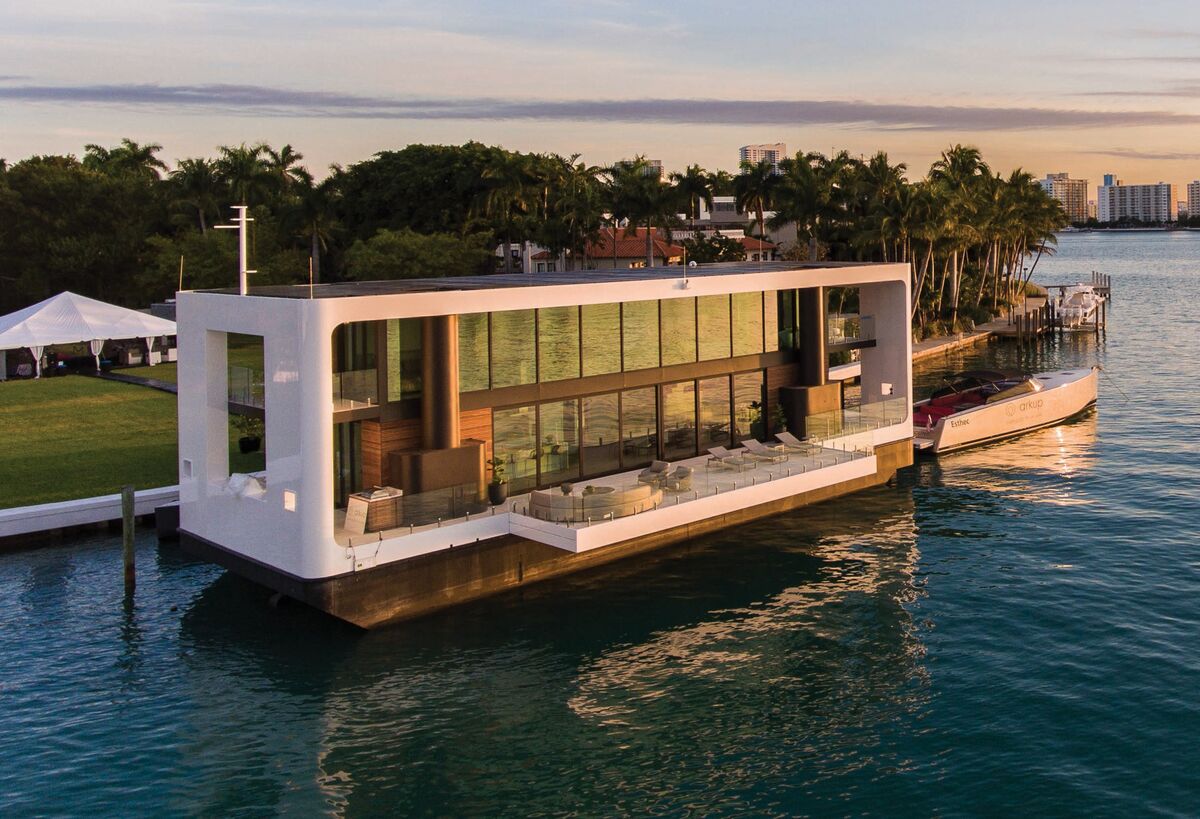 Blame James Bond. It was the sight of Roger Moore skidding a Wet Bike over the waves in 1977’s The Spy Who Loved Me that piqued yacht owners’ interest in keeping more than just a tender, or small ship-to-shore shuttle, on board. Moore’s gadget morphed into the Jet Ski, a must-have for every polyester-era playboy. The Jet Ski, in turn, raised cultural expectations for what we should be able to do on—or under, or over—the water.

Billionaires such as Jeff Bezos and his new 417-foot-long project Y721—a yacht so big it needs its own yacht—plus destinations like the Four Seasons Bora Bora keep spurring new innovations. As bigger superyachts became dominant in the late 1980s, complete with roomier onboard garages, the types of toys and tenders available multiplied. Invention is “driven by charter guests,” says Chris Clifford of the yacht industry bible Onboard. “Even if Grandpa and Grandma are paying for the boat, they’ll bring their children and grandchildren, and you’ve gotta keep them amused.” Indeed, charter specialist Burgess Yachts says 84{066dbc63777e5ed549f406789d72fdeebd77a32711d57f7b38ff2b35c4ba2a42} of its clients expressed interest in toys and water sports as crucial for their next rental.

It makes sense: Nothing says summer like a good, socially distanced splash. Whether you’re looking for an easy-to-maneuver three-cabin sailboat for your family, a two-seater Sea-Doo on steroids, or a double-decker party barge with a waterslide, here’s our roundup of the newest and hottest toys.

Four craft for the adrenaline junkie

PARAJET PARAMOTOR VOLUTION 3
You may have wondered about these flying whizbangs after spotting one soaring along a beach in the Hamptons or Miami. The love child of a paraglider and a fan boat from the Everglades, the Parajet was dreamed up by flying enthusiast Gilo Cardozo, who wanted to share his love of aviation. Strap one on—the Volution is the sturdiest of the range—and you can soar as high as 500 feet at speeds that reach 50 mph, weather willing. (Pro tip: The air is less bumpy at sunset and sunrise.) Just book a few lessons first. $8,395

SUBLUE WHITESHARK MIX PRO
Cousteau-inspired explorers keen to chart the depths of the oceans on film should pick up this double-propeller sea scooter. It can duck more than 130 feet below the surface, pulling a swimmer behind it at up to 6 feet per second. Better yet, fix a smartphone in the waterproof camera mount to record every moment. The scooter is designed to be used by anyone 8 or older—a detachable floater can keep kids from diving more than a few feet deep. $699

ZAPATA FLYRIDE
Former world champ Jet Ski racer Franky Zapata founded his company more than two decades ago to devise wacky water toys like the Flyride, a narrow Jet Ski-like device that can shoot into the air on plumes of water. There’s room for two, so a parent can hop on with an adventurous kid as young as 5. (They can also use the wireless remote to curb a teen’s crazier ambitions.) With 300 horsepower, it offers a top speed of 22 mph—and a button will initiate a barrel roll. From $9,285

SEABREACHER
Think of this fish-shaped, two-seater submersible as a Sea-Doo on steroids; the enclosed pod can leap into the air and duck under the surface at up to 50 mph. It was designed by New Zealand-born boat builder Rob Innes, who considers it more like an aircraft than a watercraft, because it’s able to operate on three axes of control. With a little practice, a pilot can even do 360-degree barrel rolls while skipping across the water. The styling of the chassis adds a witty touch: Take your pick from sharks, whales, or dolphins. The company custom-builds only about two dozen of the craft each year. From $85,000

For casual fun, try a drone, a kayak, or your own mini pool

HANSE 348
Based on Germany’s Baltic Coast, Hanse was founded by Michael Schmidt, a former winner of the Admiral’s Cup regatta. The vessels from his company deftly combine top performance—a self-tacking jib is standard to maximize ease of handling—with smart layouts and design. It’s a combination that earned this craft the title as Cruising World’s best value sailboat two years ago. Pick between a two- and three-cabin version, and you’ll enjoy the great light and clean lines below deck. $170,800

NAVATICS MITO
A student project at the Hong Kong University of Science and Technology led to this 5-year-old startup, which specializes in naval robotics. Its 7.6-pound Mito underwater drone streams footage to an app from as far away as 1,600 feet. The tethered 4K device has two 1,000-lumen headlights for visibility at depth, and four-thruster stabilization keeps the camera steady in rough currents. $1,999

TRENT PRESZLER CANOES
When Preszler inherited his father’s woodworking tools seven years ago, the avid outdoorsman spent 14 months teaching himself how to build a wooden canoe from scratch. Preszler, who’s based in Mattituck, N.Y., now juggles his day job running a winery and selling bespoke, handmade canoes to clients. Each boat, often using exotic woods such as red cedar and purpleheart, takes at least a year to complete. From $100,000

TARPON 120 FISHING KAYAK
Nimble but sturdy, this 12-foot-3-inch sit-on-top kayak with a short waterline is perfect for fishing in creeks. The American-made craft is packed with user-friendly details, including gear tracks to secure rods and accessories as well as a paddle holder on the bow to free up your hands. The self-bailing hull retains buoyancy even when waters are choppy; best of all, it’s dog-friendly. From $999

BEAU LAKE PADDLEBOARDS
With Club Monaco founder Joe Mimran among its advisers, it’s no surprise this Canadian company produces paddleboards that emphasize beauty as much as function. Made with epoxy resin and other performance materials, they’re finished with mahogany and Macassar ebony, among other options. Pair yours with the equally stylish paddles, which start at $350. From $2,950

YACHTBEACH LUXURY POOL
Avoid jellyfish stings using this pool, which has an ultrafine PVC mesh stretching almost 8 feet down into the water. The largest, superyacht-aimed option includes a 19-by-13-foot boardwalk with a comfy foam top that’s wide enough for sunbathers to linger near the swimmers. €6,799 ($8,270)

ARKUP 75
The ultimate overwater bungalow, Arkup’s two-story glass-box-like villa can be permanently tethered to a dock or cruise at a leisurely 7 knots under its own power. The open-plan four-bedroom structure has 2,600 square feet of indoor living space that connects to a retractable 450-square-foot deck. Its eco-credentials are impressive: Solar panels on the roof supply power, and tanks collect and purify rainwater for drinking and bathroom use. Sadly, the prototype has already sold, but the company is building several custom projects riffing off the same design, as well as planning smaller, marginally more affordable models. From $5.5 million

PREMIER ESCALANTE PONTOON BOAT
There’s no better party venue than this 35-foot double-decker pontoon, with room for up to 20 people: A stairway turns into a slide from the upper deck straight into the water. Need we say more? The design incorporates more practical measures as well, including a hard-sided changing room/bathroom, plus a refrigerator, sink, and wine cooler. With 800 horsepower or more, the Escalante is packing as much power as some speedboats. Just make sure not to leave anyone behind. From $154,150

ROM 28
The aptly named ROM, which stands for Rebuild Ocean Motivation, will construct a boat your way at its shipyard in Aveiro, Portugal. Former technology consulting executive Jorge Martins founded the startup four years ago to bring superyacht customization to smaller craft, upgrading workaday designs in a sleeker, sportier style. When Martins unveiled this specific model in January, he promised only 20 of the eight-passenger 25-footers would be made; just 14 remain. From €230,000

BIGAIR YACHT BLOB
This classic lake toy was first developed in Texas from an army-surplus fuel bladder. Like a seesaw, when someone jumps onto a specific spot from a boat, the force will propel anyone sitting at the other end up to 30 feet in the air. Austin-based FunAir has reengineered the blob for use on the ocean, adding stabilizer outriggers to prevent it from turning over and an inflatable stand-off to stop anyone from bashing back into the hull after they jump. It takes only around 20 minutes to set up. $4,000

NAUTIBUOY FLOATING PLATFORMS
Countless companies produce platforms like this that can be jigsawed together to create a pontoon at the back of any vessel, be it speedboat or superyacht. The big differentiator for this British company’s offerings is the quality of construction, with drop-stitch cores and strong, durable PVC borders. NautiBuoy’s own ballast system keeps the platforms stable, and the teaklike finish is stylish and slip-resistant. Buy one to act as a parking slot for your Seabob or Jet Ski, and attach it to another for an impromptu, al fresco cocktail lounge. From €3,805

YACHT JOUST
Anyone prepping to compete on Wipeout can finesse their dueling skills with a few sessions on this inflatable platform 5 feet above the water. The lightweight batons are easy enough for kids and adults to handle. Yacht Joust can be secured almost anywhere—in a small cove or close to a beach to drum up some cheers or jeers from spectators—and packs down to the size of a carry-on bag. $8,000

AQUAGLIDE RESIDENTIAL MINI PARK 4
Install this 38-foot-long inflatable obstacle course behind your boat or lakefront home. The main appeal is a 10-foot, high-velocity slide, complete with an interior mesh floor at the bottom for safer splashing. You can also loll on the water, safe from the sun, under the roof of the Ohana lounge platform. Small decks connect the two elements, making it a cinch to hop into the splash zone. And if you want to expand your water park, other Aquaglide inflatables attach easily. $8,600

Before it’s here, it’s on the Bloomberg Terminal.