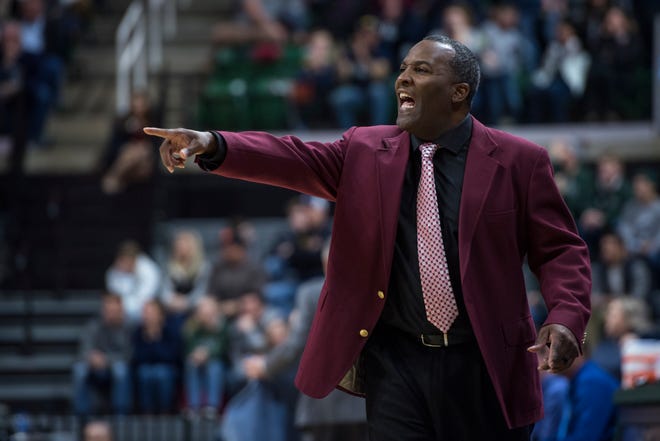 It looks like the state’s winter sports season has been pushed back again by Gov. Gretchen Whitmer, and River Rouge boys basketball coach Lamonta Stone is upset with the news.

The governor and state health department announced winter contact sports — including girls and boys basketball, competitive cheer, ice hockey and wrestling — must remain non-contact through Feb. 21, said MHSAA Executive Director Mark Uyl in a statement. The previous emergency order was set to expire at the end of January, which would have allowed those sports to start Feb. 1.

“We found out about this decision at 9:30 a.m. like everyone else,” Uyl said, “and we will address it as quickly as possible after taking the weekend to collect more information. We did not anticipate this delay in winter contact practices and competition, and today’s announcement has created many new questions.

“Obviously, this is disappointing to thousands of athletes who have been training with their teams over the last week and watching teams in other states around Michigan play for the last two months.”

Indiana and Ohio basketball teams have been playing, including former Clarkston standout Fletcher Loyer who has moved on to play for Homestead High School in Indiana. Loyer has scored 30 or more points in five of his 14 games.

“Players and their parents could always trust me, knowing I’m giving them good information, but I don’t like this, you know, it looks like I’m not trustworthy,” Stone said. “Legend Geeter’s dad is getting calls from prep schools, telling him that we’re not going to play high school ball in Michigan and I’m telling him to ‘stay with us, we’re playing, and he’ll have a chance to be Mr. Basketball.’

“If we’re not going to have a game on February 5th, the kids need to know to make their next move. They’ve been loyal, but if they want to go play at a prep school or AAU ball then they should have that right, especially since we wouldn’t know when or if we’re going to have a season. In fact, if we’re not playing until February 27th then just cancel the season now.”

If first contact practices take place on Feb. 22, then it just makes sense that the postseason would be pushed back three weeks as well, meaning state title games wouldn’t be played until the final week of April.

River Rouge was one of the top basketball teams in the state last year, ready to play Detroit Cass Tech in a district final when the season was shut down due to the pandemic in March. Spring sports didn’t take place.