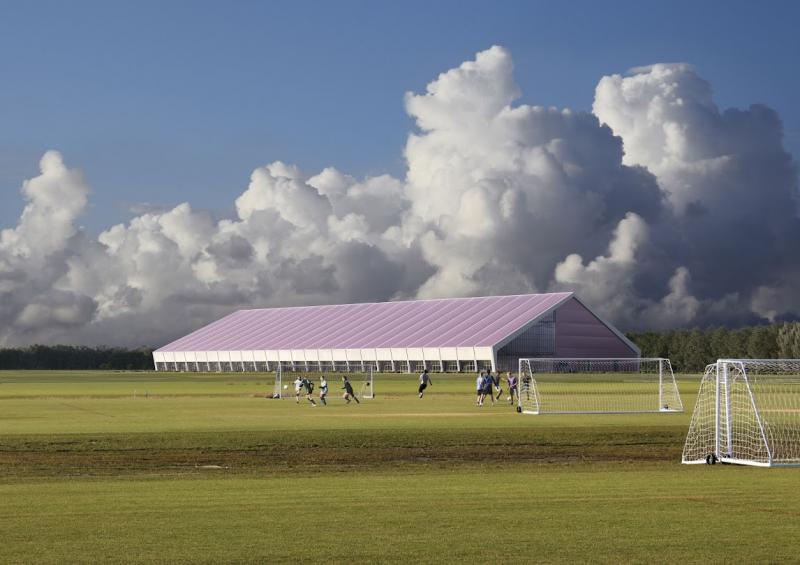 Joe Schell, president of the Sussex Sports Center Foundation, asked Sussex County Council for a $1.5 million loan to support the capital campaign for the new Sandhill Fieldhouse during its Sept. 27 meeting.

Plans are moving forward for the $7.5 million project, which includes a 42,000-square-foot indoor sports facility with two indoor sports fields and a multi-use sports court.

The fieldhouse will provide space for youth soccer, lacrosse and field hockey, and indoor pickleball. Secondary uses will include basketball, volleyball and community events such as graduations, church services and fundraisers.

Schell said the loan would be similar to one the county approved for the construction of the Sand Hill Fields complex four years ago.

Council did not take action on the request from Schell.

The fieldhouse is the second phase of the Sandhill Fields complex located off Sandhill Road and Route 9 in Georgetown. Phase 1 was completed in September 2020.

Schell said the $7.5 million cost includes a $500,000 contingency fund. He said the fundraising campaign includes $5.1 million from the private sector, $300,000 from the business community and $2.1 million from the public sector, including the county. The Town of Georgetown has already committed to a $100,000 donation, paying $25,000 a year for four years.

He said nearly $4 million has been raised so far from private donations. Schell said construction of the indoor facility is scheduled to start in 2023.

“This needs to be a public-private partnership to be successful,” Schell said.

He said the county can consider a buyout of $1 in 2030 to take over the complex and fieldhouse. “We want to make this so enticing that you will want it. The foundation is not in business to run this in the long term,” he said. “This can be a profitable organization and keep putting money away in reserves.”

Schell said the foundation plans to lease a section of its property for construction of a solar farm. He said the lease would provide $92,750 annually for operating expenses for the complex starting in 2024.

In addition, the complex hosts several large tournaments during the year. He said it’s anticipated the tournaments will generate about $750,000 in revenue for county business, such as hotels and restaurants.

In February 2018, council approved a $1.5 million loan for the first phase of the $4 million project, which included construction of eight soccer and lacrosse fields, six pickleball courts, a playground, picnic area, 3.5 miles of trails, a certified cross country trail and parking for 750 vehicles.

Under terms of the original agreement, the county is forgiving payments on the 50-year loan at 0% interest for the first 10 years and then has the option to forgive the loan and purchase the complex for $1. If the complex is not taken over by the county, the foundation will make a $37,500 annual payment to the county.