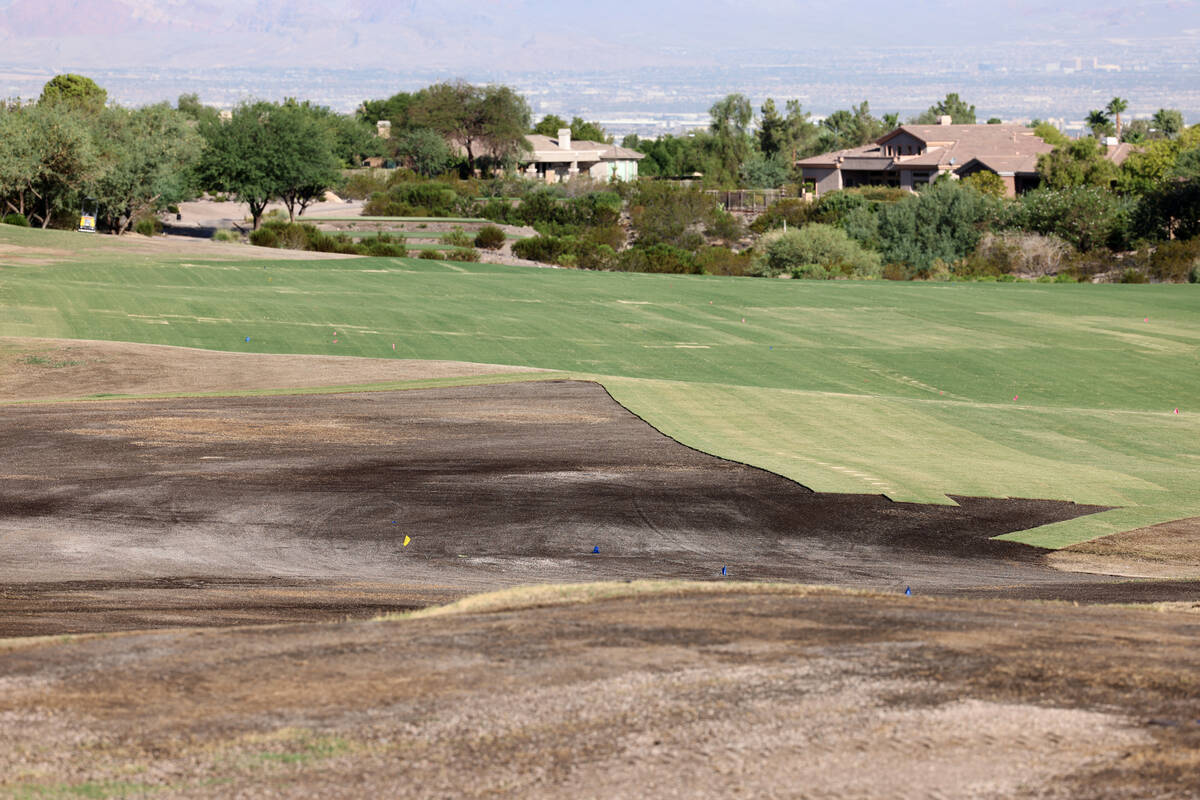 Anthem Country Club already had partially closed its golf course to renovate the greens when officials realized they needed to take even larger steps in light of the Southern Nevada Water Authority’s proposed new regulations.

So Anthem’s board of directors opted to close the entire course and get in compliance.

Anthem’s decision to take that step is one of many by local sports entities to assist Southern Nevada’s efforts to conserve in light of Lake Mead’s declining water level that has caused alarm throughout the Southwest and Mexico.

“This is bigger than Anthem Country Club,” club golf course Superintendent James Symons said. “The board realizes that, so they really bought into the idea to get on it quickly and try to get ahead of this as quickly as possible.”

Lake Mead, the primary water source for Las Vegas, six neighboring states and parts of Mexico, has dropped about 25 feet this year.

The water authority has taken multiple steps during the past 20 years to address the situation and continues to be proactive to keep the crisis from worsening.

Local sports play a significant role, and though the golf courses are the most high profile in the water conservation efforts, they aren’t the only ones.

NFL Green, the league’s environmental arm, is working with local officials in the run-up to the 2024 Super Bowl at Allegiant Stadium. As director of NFL Green, Jack Groh said there is little the organization can do to directly improve water conservation efforts, but an informational campaign could be quite effective given that game will attract fans from all over the country.

Part of that campaign could be as simple as reminding visitors to hang towels to reduce laundry loads or shorten their showers. Then, Groh said, those fans can take that message back home with them.

NFL Green was made aware of the water issue when it was here earlier this year. The Las Vegas Convention and Visitors Authority brought NFL Green together with the water authority and UNLV.

“It’s now very much on their radar,” said Nancy Lough, UNLV co-director of sports research and innovation initiative. “It’s certainly something that they’re going to be looking toward as they come back and engage with us in Las Vegas in the future. So to my mind this is a great opportunity for UNLV, for those of us in the community who care about sustainability and creating education and awareness basically through sport to help people understand the need for water conservation.”

NFL Green already made an impact when the draft was in Las Vegas at the end of April, bringing in water-filling stations that Groh said reduced plastic-bottle use by 53,000 over the three days. Groh acknowledged that effort was more about waste than water conservation, but it still underscored NFL Green’s mission and will be applied when the Pro Bowl returns to Las Vegas next year.

Groh said NFL Green is working with the Raiders on ideas of how to prepare for the 2024 Super Bowl. Las Vegas’ NFL team plays on Bermuda grass at Allegiant Stadium. That grass is drought resistant and requires less watering.

The Aviators switched to Bermuda at Las Vegas Ballpark, and the amount of watering has been greatly reduced.

Reclaimed water is used for the ice at the Golden Knights’ and Silver Knights’ practice facilities. Former Golden Knight Ryan Reaves, of course, once was the face of the water authority’s advertising campaign; his popular commercials helped bring to light the importance of water conservation.

The water authority oversaw the conversion of 29 high school football fields from grass to turf and had another seven turf fields upgraded. The Clark County School District received $7.4 million in rebate incentives, and the authority’s actions save $1 million a year in water usage, according to the agency.

Next, the authority will work with the school district on converting six baseball and softball fields to turf with the long-term goal of changing all the fields.

“With the pandemic and being no sports (for about a year), there was really a prime opportunity for us and the school district to work together on water conservation,” authority spokesman Damon Hodge said.

The authority also is working with UNLV to convert its baseball and softball fields from grass to turf.

No sport, however, is more dependent on grass and water than golf, and the area’s courses are on notice to reduce their water allotment from 6.3-acre feet per year to 4.0 by January 2024.

“For a lot of courses, that’s a huge hit, Anthem being one of them,” Symons said. “You can’t just do that overnight.”

Anthem is spending about $1.6 million to change the fairways from Ryegrass to Bermuda grass in addition to the money already committed to renovating the greens and changing to a more efficient irrigation system.

“We do understand that it will impact (golf courses’) business,” Hodge said. “We’re not ignorant of those concerns. At the same time, the goal is to ensure that we are water secure now and well into the future. Every single aspect of our community — residential, commercial — plays a role in that. and these things are not done in a vacuum or blindly.”

Many golf courses already are in compliance with the new standards, according to water authority statistics, and Hodge said those that surpass the water budget “incur some higher fees.” But he said that has not occurred in about a decade.

Officials for the two most high-profile courses — Shadow Creek and TPC Summerlin — said conservation methods already are in place.

At Shadow Creek, the lush private course that has hosted an LPGA Tour match play and other notable events, a drip irrigation reduces water usage by up to 30 percent, according to an official. Soil sprays help keep the water from dissipating, and sensors keep a regular check on moisture in the soil.

“Our social impact and sustainability platform outlines our commitment to environmental stewardship and improving the lives of employees, guests and the communities in which we operate,” said a spokesperson for MGM Resorts, which owns Shadow Creek. “This includes efforts to reduce water usage at Shadow Creek.”

TPC Summerlin, which hosts the Shriners Children’s Open, began a renovation in April, changing the fairway grass from a hybrid Bermuda to Bandera Bermuda. The Bentgrass greens are being replaced with Dominator, a combination of two Bentgrass types.

“As time goes on and more research is done, we have ID’ed a type of grass that is more resilient,” TPC Summerlin general manager Brian Hawthorne said last December.

Sports doesn’t play the most vital role in water conservation, but it does have its part, mirroring the surrounding Southern Nevada community by the removal of grass for more of a desert look.

UNLV’s Lough is concerned about taking it too far, saying “a heat map” also can be a major problem if there aren’t enough trees and grass to provide a more cooling effect.

The trend, however, is to aggressively find ways to conserve water so that Lake Mead’s levels don’t keep falling.

Las Vegas also continues to grow, as does its place in the sports universe. The city already is home to NFL, NHL and WNBA teams as well as a Triple-A baseball club and several minor sports.

Major League Baseball could be on the way with the Oakland Athletics considering moving here, and an arena will be constructed south of the Strip that could be home to a future NBA team.

“I don’t think (the water crisis) will keep people from moving (to) or staying in Las Vegas, and part of that is not necessarily positive,” Lough said. “Part of that is because I think a lot of people really don’t understand the importance of this issue.”

Hodge said the area, however, has shown it can absorb the growth of the population and the sports scene and still properly address the water shortage.

“We’ve proven in the past we can grow our economy and enjoy a great quality of life reducing water use,” Hodge said, “and the important thing is to make sure we keep doing that.”