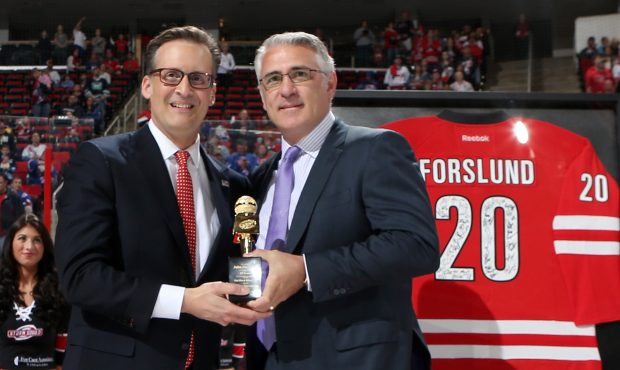 John Forslund and Ron Francis are reunited in Seattle. (Photo by Gregg Forwerck/NHLI via Getty)

The NHL’s Seattle Kraken have a TV home and a play-by-play announcer to go with it.

The Kraken announced Tuesday that they have agreed to a multiyear agreement with ROOT Sports, making the regional network their television home in the Pacific Northwest. Veteran announcer John Forslund, who has handled play-by-play duties for national NHL broadcasts for NBC Sports, will serve as the voice of the Kraken on ROOT.

ROOT will broadcast approximately 75 games of the Kraken’s 82-game regular season schedule, according to a press release. ROOT, which is a joint venture between the Seattle Mariners and AT&T Sports Networks, is also the TV home of the Mariners.

“Our partnership with ROOT Sports gives our fans around the Pacific Northwest a home that is already familiar to them,” said Kraken CEO Tod Leiweke in the release. “Their experience with the Seattle Mariners made them a great choice to build a broadcast that will be unique for our fans. Additionally, their broadcast distribution will help us ensure that Kraken games will be on at every sports bar around the Pacific Northwest.”

Forslund’s hockey announcing career dates back to 1995, when he started calling games on TV and radio for the Hartford Whalers. He remained with the franchise when it moved to Carolina and became the Hurricanes, serving as the team’s play-by-play man until this year.

Seattle, you’ve got an incoming call – and trust us, you’ll want to answer this one. 😏 pic.twitter.com/XRlCkgzDNw

“John Forslund is one of the best broadcasters in sport. He always brings fresh perspective and having him as a voice of our franchise is a big win for us and for our fans,” said Leiweke. “He will play a role in introducing hockey to new fans and become a team ambassador for us.”

Forslund has history with Kraken general manager Ron Francis, a Hockey Hall of Fame member who was a player for the Hurricanes in the late 1990s and early 2000s and later had tenures as Carolina’s director of hockey operations and GM.

The Kraken now have two announcers on staff. Everett Fitzhugh was signed by the team last year and is set to become the first Black play-by-play broadcaster in the NHL.

“It is an honor to join the Seattle Kraken as their inaugural television voice,” said Forslund. “I am looking forward to reuniting with Ron Francis and working alongside Everett Fitzhugh. Throughout my career I have cherished my connection with fans. To get the chance to create that bond and tell the Kraken story from day one is a magnificent opportunity. I would like to thank the Seattle Kraken for this chance.”

The Kraken are set to begin play in the NHL next season, which begins this fall. They will hold an expansion draft on July 21, followed just days later by the team’s first participation in the NHL Draft.

A look at the NHL Seattle Kraken hockey team