Rowing the Nile: A Soothing Respite in a Chaotic Metropolis 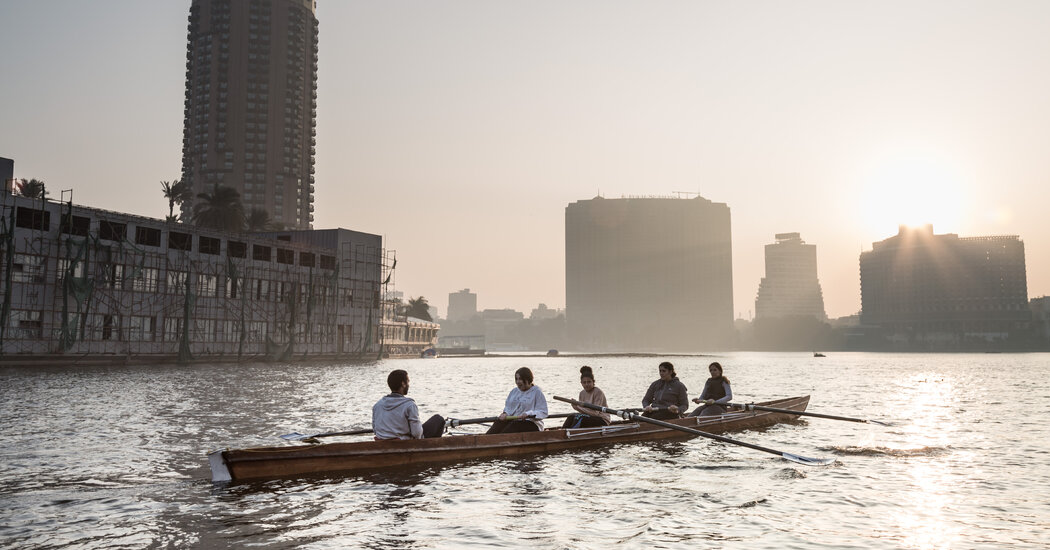 CAIRO — Sunset is when the Nile blinks to life in Cairo, the party boats twinkling like Vegas, the couples on the Qasr el-Nil bridge lingering in the breeze, the riverside cafes clinking with commerce long past most cities’ bedtimes.

By 6 a.m., when the rest have gone home, the rowers come out to a Cairo few others know: no traffic, no crowds, little chaos. Even the birds are audible this time of morning, when the city’s battalions of car horns offer only groggy competition and winter fog pales the five-star hotels along the shore. In the boat, the oar blades smear and scrape the river like knives over cream cheese. Rhythm replaces thought: Dip the oars. Push with the legs. Pull back. Repeat.

“Being on the water in the early morning, where you don’t think of anything but following the person in front of you — it takes you out of the city,” said Abeer Aly, 34, who founded the Nile Dragons Academy, a rowing school in central Cairo. “A lot of people think about their problems in the shower. I think about mine during rowing.”

These days, Ms. Aly’s problems do not include a lack of business. Just a few years after opening the school in 2013, she had a waiting list hundreds of people long; there are now so many Cairenes interested in amateur rowing that a half-dozen water sports centers offer classes up and down the riverfront.

The Nile birthed Egyptian civilization thousands of years ago, its silty waters bestowing agricultural riches that built an empire, and still sustains it. Cairo residents might have coffee at a floating restaurant or board a felucca for an hourlong cruise; Nile water flows from their taps and grows their food. But mornings on the river are the closest most of the rowers have ever come to the body of water itself.

“When people hear I’m rowing, they’re like, ‘Rowing? Where?’” said Nadine Abaza, 43, who began rowing three months ago at ScullnBlades, a rowing school near her home in Maadi, a well-to-do Cairo suburb. “You see it driving over the Nile, but you don’t think of it as something you can do.”

For most Cairenes, the river without which their country would not exist has become mere scenery. Assuming it can be seen.

A riverfront promenade, the corniche, once allowed drivers to travel from Cairo’s southern reaches all the way to its northern sprawl without interrupting their river view.

But in much of central Cairo, private clubs and restaurants built over the last four decades at river’s edge or parked permanently on stationary barges have hidden the Nile from all but those who can pay. Many prime spots are owned by organizations belonging to the military, the police and the judiciary.

Granted, there are other reasons to stay away from a river that collects sewage, garbage and other pollutants for miles before it flows, greenish-brown and intermittently pungent, into Cairo. The rowers share the water not only with police boats, fishermen and ferries, but also the occasional archipelago of litter and — at least once — a dead cow.

“If we existed over many thousands of years because of it,” said Amir Gohar, an urban and landscape planner who has studied Egyptians’ relationship to the Nile, “now we’re trashing it and we’re ignoring it.”

Some parts of the corniche still remain open for walking, and in poor Cairo neighborhoods and other parts of Egypt, people go to the Nile to swim, fish and — if they have no running water — scrub their dishes, clothes and animals. But compared with Cairenes past, today’s residents maintain a far more distant relationship with the river.

Ancient carvings and model boats found in tombs suggest that people rowed up the Nile to transport supplies, including the massive stone blocks of the Great Pyramids, to celebrate festivals and just to get around. It was by boat, the ancient Egyptians believed, that the sun traversed the skies and the dead crossed to the afterlife.

Maybe that explains why Amenhotep II, a pharaoh who ruled Egypt from about 1426 to 1400 B.C., was eager to brag about his rowing prowess. While Amenhotep’s 200 oarsmen were “weak, limp in body and breathless” after rowing half a mile, one carving claims, the king — “strong of arms, untiring when he took the oar” — stopped “only after he had done three miles of rowing without interrupting his stroke.”

The Europeans who dominated Egypt in the early 1900s were the first to establish modern-day rowing clubs along the Nile. For decades, the sport was reserved for foreigners and elite Egyptians, with races called in French.

After the monarchy fell and foreigners fled in the wake of Egypt’s 1952 revolution, the Nile, like so much else in Egypt, was transformed under President Gamal Abdel Nasser’s socialist vision. As Nasser established new trade unions to look after their members’ needs from housing to health care, these syndicates were granted Nile-front land to build clubs where members could relax and, in some cases, row.

In the 1970s, seeking to lure tourists back to Egypt after a war with Israel, the government staged regattas that drew top rowers from Europe and the United States, who raced past the temples of Luxor and through central Cairo. Among Egyptians, however, rowing never stood a chance against popular sports like soccer.

Today, private clubs along the Nile still belong to the engineers’ syndicate, the judges’ club, the police and others. But as later governments rejected Nasserism for capitalism, private developers built much of the riverside into cafes and pricey housing.

This in a city with less than five square inches of green space per resident.

“You’re talking about Cairo, which has 20 million people now, but it has very little public space or green space,” said Yahia Shawkat, an urban researcher. “And with everything you have on the Nile, it’s not just that it’s exclusive, but you’re also blinded from seeing or enjoying the river.”

Egyptians appropriate the riverfront where they can, some traveling from as far as the city’s outskirts in search of what amounts to a free, pop-up park. Every night, Cairenes gather on the Nile bridges for the view and the cooling breeze. Some fish. Families buy snacks of stewed chickpeas and roasted sweet potatoes from vendors who set up unlicensed sidewalk cafes. Couples take selfies.

Rowing classes cost around $7 to $13 an hour, out of reach for most Egyptians. But for young professionals and upper-middle-class families who can afford it, rowing has become a fast-growing niche, some content to row recreationally, some compelled enough to join amateur racing teams.

Water sports schools say they have signed up newcomers in their 20s up to their 60s, part of a fitness trend that emerged after Egypt’s 2011 revolution. Social media has helped, as has the pandemic: ScullnBlades received twice as many sign-ups after the coronavirus hit, because of its outdoor setting.

“It wasn’t accessible until recently,” said Emma Benany, 31, who co-founded Cairow, a water sports academy in the Dokki neighborhood. When she started rowing in 2011, she found only student teams or private clubs, almost nothing for amateurs; new academies, including hers, still operate from club-owned docks. “You couldn’t be in your 30s and decide to take up rowing.”

One might guess that you also cannot be afraid of the Nile and decide to get in a boat. Yet many new rowers come with questions like: If I fall in, won’t I drown? Aren’t there whirlpools? Won’t I get bilharzia, a locally common disease caused by freshwater parasites?

You won’t, there aren’t and parasites do not thrive in moving water, the coaches explain, though the current can make for trickier swimming than a pool. Ms. Aly, of the Nile Dragons Academy, said she had even drunk directly from the Nile to reassure leery rowers.

Those who have studied the river’s contamination might not approve. But still: Point taken.

“Before, I was afraid of the Nile,” said Mariam Rashad, a coach at Cairow. “Now I feel like the Nile is an important part of my day.”