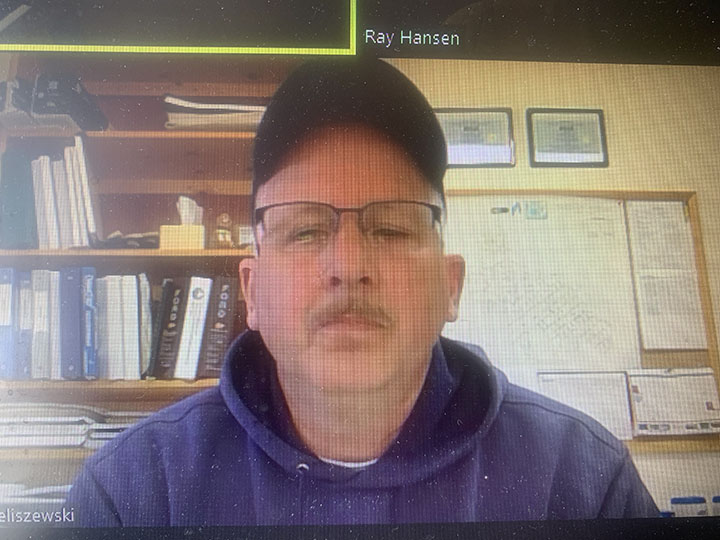 News Photo by Steve Schulwitz
Chuck Kieliszewski, water superintendent, is pictured during a Rogers City Council special workshop Wednesday to consider purchasing new water meters for about 900 of its customers. To pay for the meters, and ensure healthy water and sewer funds, rate increases are being considered.

ROGERS CITY — Residents in Rogers City may see an increase in their water and sewer bill in 2022, as the Rogers City City Council considers raising rates to help cover the cost of new water meters for water customers.

A vote on the new rates could come at the next council meeting on May 17.

At a special workshop on Wednesday, the council got details on a plan to replace more than 900 water meters because the software that runs them will no longer be maintained by the company who makes them.

The city has slowly been swapping out the old meters for the last decade, but now wants to replace the remaining ones in one swoop because it received a zero-interest financing offer from the meter company, Metron-Farnier, which would lead the installation project.

City Manager Joe Hefele said the meters and installation will cost about $180,000 with funds coming from the water and sewer fund over the next three years.

With other costly projects and unexpected system emergencies looming, the funds will take a hit.

In order to replenish the money withdrawn for the meters, Hefele said higher rates were intended to be discussed for some time, but he decided not to broach the subject during the pandemic when many people were struggling. He said the current offer from Metron-Farnier is too good to pass up, because eventually the work will need to be done, and it will likely cost the city more to do down the road.

Hefele said the higher fees will help to keep the water and sewer funds solvent enough to cover unexpected repair costs and water and sewer line projects. If the rates remain the same, needed maintenance and improvement will be hard to do.

“The price of everything always goes up, they never go down,” he said. “There is no way to keep the rates that we have forever, as much as we would like to. If we do, we’ll watch our system get run into the ground.”

Mayor Scott McLennan said nobody on the council wants to raise rates, but they also know keeping the water and sewer system functionable long-term is a high priority. He said it is better to bite the financial bullet now, then to tell people it will be much more a few years from now.

“I don’t like to see rates go up, but realistically we have to do this I think,” McLennan said. “I don’t want to have to tell people three years from now ‘oh, by the way, we have more problems and now your increase is eight dollars.’”

Hefele said the life-expectancy of a new meter is about 20 years, but, as they age, their accuracy is reduced. He said the new meters will help ensure all customers are paying for what they consume.