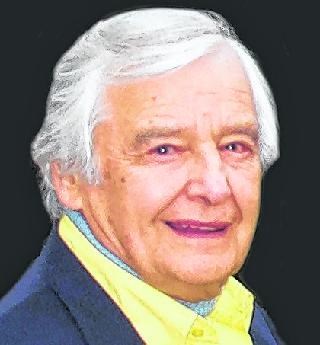 CARBALLADA – Richard E. “Rick Azar”
Passed away peacefully on March 25 at Millard Fillmore Suburban Hospital, he was 91 years old. The second child of immigrant parents Jose Ramon Carballada and Maria Esther (Babilon) Carballada, Efrain Ricardo Carballada was born in Buffalo in 1929 but spent his early childhood years in the Gowanus section of Brooklyn before he, his parents and his brother Carlos returned to Buffalo prior to the start of World War II. Rick was a graduate of the St. Louis Grammar School, St. Joseph’s Collegiate Institute (1946), and Canisius College (1950). After several years in New York City working as an actor, fashion model and staff announcer at NBC Radio, Rick returned to Western New York and became a disc jockey at WHLD in Niagara Falls. On November 30, 1958, he was the first voice heard on the new television station WKBW-TV (now WWKB), signing Channel 7 on the air. Among his other duties at the station, he hosted the popular local dance show Buffalo Bandstand; on at least one occasion, he stood in for Dick Clark on the nationally broadcast show American Bandstand. He became Channel 7’s on-air sports director in 1965, and in that year joined news anchor Irv Weinstein and weatherman Tom Jolls to form the longest running and most highly rated news anchor team in the nation. In his sports broadcasting career, Rick provided television and radio broadcast color analysis and television play-by-play for the Buffalo Bills, the Buffalo Sabres, the Buffalo Braves, local collegiate basketball, and many other local, regional and national sporting events. He witnessed and reported on many of the most iconic moments in Buffalo sports history and covered many national events, including PGA Golf and the 1980 Winter and 1984 Summer Olympic Games. He was a member of St. Joseph’s Collegiate Institute’s Signum Fidei Society and received numerous awards and citations, including the Canisius College Distinguished Alumni Award. He was also a founding board member of the Buffalo Sports Hall of Fame, into which he was inducted in 1997. In 1998, he and his former colleagues Irv Weinstein and Tom Jolls were collectively inducted into the Buffalo Broadcasters Hall of Fame. Rick retired from Channel 7 in 1989 and later took up residence in Whispering Pines, N.C., where he hosted a radio jazz show on WLHC-FM and taught English as a Second Language to recent immigrants at Sandhills Community College. He also authored a book, Tales from Azar’s Attic, which detailed stories from his life and career in broadcasting. Rick was an avid golfer, and could often be found practicing his putting technique while a member of Brookfield County Club in Clarence and later at the Country Club of Whispering Pines. He was also a music lover who played the violin his entire life and was proud supporter of the Buffalo Philharmonic Orchestra. He had an extensive library of jazz recordings and shared his deep knowledge on his radio show. He is survived by his wife of 65 years, Edith (Centofanti), his four children, Richard, Gregory (Roseann), Claudia and Jeffrey, his two grandchildren, Christina and Michael, his brother Carlos (Virginia) Carballada, and numerous nieces and nephews. He was predeceased by his son David. Private interment with prayers will take place at Forest Lawn Cemetery. A memorial service is planned for a future date. The family wishes to thank everyone in the Western New York community for their well wishes and support during this time. Arrangements by (Amherst Chapel) AMIGONE FUNERAL HOME INC. Please visit Rick’s Tribute Page to share memories and condolences at www.AMIGONE.com