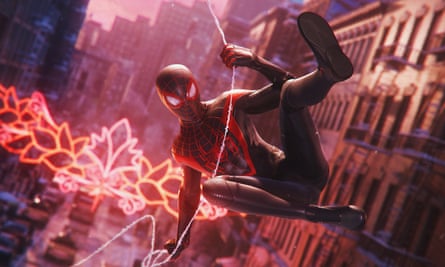 With more than 110m PlayStation 4s sold, Sony is coming into the next console generation with nothing to prove. But the company has squandered goodwill before: it followed up the beloved PlayStation 2 with an awkward-looking, difficult-to-develop-for console that cost the equivalent of £600 in today’s money. It took PlayStation 3 almost a decade and several remodels to make up the ground it had lost. The PlayStation 5 certainly looks wild next to the modernist oblong that is PS4, but this is no conceptual experiment in hardware design. It is a console that wants to make you feel good, to celebrate the time, money and passion we expend on video games.

The console itself is a statement object. Standing vertically, its white casing tapers to a V around the shiny black body of the machine. It is enormous and looks like a futuristic spaceship. The new DualSense controller is white with black accents, a slightly different shape from the PS4 pad that feels equally comfortable in the hands. The texturing on the grips comes in the form of tiny circle-square-triangle-cross symbols that you can see only if you zoom in on a high-res photo – a cool hidden design secret indicative of the thought that has gone into the PS5’s appearance.

Inside the box are all the components that enable this next-generation console’s flagship features: a fast SSD that all but eliminates load times and lets you easily and quickly switch between games; a CPU and GPU that enable realistic lighting, 4K resolution and a frame rate of up to 120fps; and support for 3D audio. You would need a cutting-edge 4K television to take full advantage of all of this, but on my three-year-old 65-inch OLED screen, some improvements are immediately noticeable. Playing Marvel’s Spider-Man: Miles Morales, I was amazed by the difference that a 60fps frame rate and instant fast-travel and loading made to the experience – the game felt much zippier and more responsive.

When you turn the console on you get a soothing startup screen with ambient sparkly lights and sound. The home screen shows a horizontal grid of your games and apps, refreshingly minimal and easy to navigate. Scroll down on a particular game and you’ll see news, levels and activities you can jump straight into, and videos and screenshots that people have uploaded. While you’re playing, settings and friends lists and other essentials appear in an unobtrusive bar at the bottom of the screen when you press the controller’s PS button – this menu also lets you jump around almost instantly between levels or even between games.

The controller, meanwhile, keeps the cool-looking touch pad, light bar and mini-speaker from the PlayStation 4, and adds haptic feedback (precise and contextual rumble) and adaptive triggers that can give you varying resistance when you pull them. This means you can feel when you’re driving over an uneven surface or pulling back on a taut bowstring.

One of the PlayStation 5’s launch games takes advantage of these elements. The console comes with Astro’s Playroom, a cute, ingenious and pleasingly nostalgia-infused introduction to the console and its controller. It imagines that there are tiny adorable white robots inside the PS5, and you run and jump around sumptuous-looking levels with names like SSD Expressway and GPU Jungle, collecting memorabilia from PlayStation history. It will make you laugh as the robots act out scenes from pretty much every game that has appeared on Sony’s consoles since 1994. It’s ridiculously endearing, and finds clever uses for DualSense features – in one sequence, I climbed up a mountain in a robot monkey suit, squeezing the triggers gently to clench my monkey fists without crushing the handholds. Anyone who’s ever had a PlayStation will delight at the in-jokes and references.

Watch a preview of Astro’s Playroom

The PlayStation brand has 25 years of beloved cultural history and nostalgic associations, and lot of that history is accessible on PS5 as well – at a price. Subscribe to PlayStation Plus for £50 a year, and, as well as online multiplayer and monthly free games, you get access to 20 of PlayStation 4’s classic games, from God of War to Persona 5, all benefiting from faster loading and graphics upgrades. These games looked so good on a PS4 Pro that I couldn’t observe much of a difference, but at least I didn’t have to listen to the jet-engine noise of the PS4’s fans while I played. For another £50 a year you can subscribe to PlayStation Now, which lets you stream or download from a changing library of PS4 and PS3 games. If you’ve spent the seven years since the PS4 debut building up a collection of its games, you’ll be pleased to know that 99{066dbc63777e5ed549f406789d72fdeebd77a32711d57f7b38ff2b35c4ba2a42} of them are compatible with PlayStation 5. (Sony has published a list of exceptions.) Some PS1 and PS2 games from the 90s and 00s can be bought through the PlayStation store.

Aside from Astro’s Playroom and Spider-Man: Miles Morales, I wasn’t able to play any other PlayStation 5 launch games. The others are Demon’s Souls, a remaster of a world-changing game from 2008; SackBoy: A Big Adventure, a family friendly platformer starring the LittleBigPlanet mascot; Godfall, a hack-and-slash combat game; and a selection of non-exclusive games such as Assassin’s Creed Valhalla and the intriguingly bizarre Bugsnax. As launch lineups go, it’s not bad, but not brilliant, either. We’ll be waiting well into 2021 before more games appear to test the PlayStation 5’s capabilities.

The PlayStation 5 is quite expensive. The console itself is £450 (£350 without a disc drive), and new games are selling for £70 each. This will surely decrease in the coming years, but the price of being an early adopter is high. It does at least feel expensive and novel, different enough from the PlayStation 4 to give that shiny-new-thing feeling, and the inclusion of Astro’s Playroom and 20 upgraded PlayStation 4 classics for PlayStation Plus subscribers does ease the pain of the price.

Perhaps unsurprisingly after a quarter-century of selling consoles, Sony understands the excitement that surrounds a new one, and the PlayStation 5 leans into it. Big, bold-looking and festooned with new bells and whistles, it makes you feel as if you’re buying into something futuristic and novel. With games at £70 a throw, though, you’re certainly paying for it.