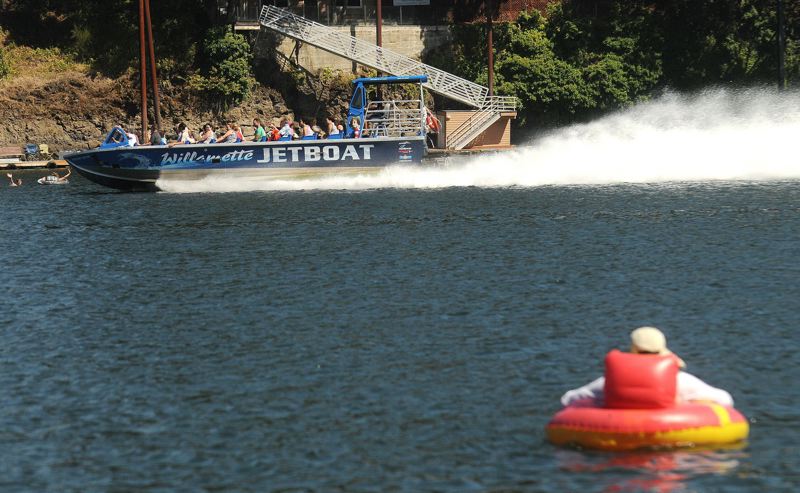 The Oregon State Marine Board approved new boating regulations Jan. 27 that restrict towed water sports from the Hawthorne Bridge to the Waverly Marina in Portland from May 1 through Sept. 30.

During the Marine Board’s Jan. 27 meeting, regulations that have been in the works for the past 15 months were adopted. The new regulations include an additional pass-through zone from the Hawthorne Bridge to the Waverly Marina, which would essentially create a “no-play zone,” though boats can travel through at regular speed.

The City of Lake Oswego expressed concerns with the rulemaking process and that the new regulations would drive more water sport users toward already crowded portions of the river from George Rogers Park to Hog Island in Lake Oswego.

“We’re concerned that right now, it’s a situation where we’re kind of in an unsafe situation, and by the Marine Board changing the rules and eliminating a large stretch of river where people are enjoying their motorized watersports, that it’s going to push them into a more restricted area where we’re already seeing issues,” said Lake Oswego Parks Director Ivan Anderholm. “We’re on a narrower, more populated stretch of the river than the areas where they’re basically banning the activity.”

While Anderholm said the city is not against water sports, he’s worried about overcrowding and more potential conflict between motorized boats and swimmers or human-powered vessels.

Anderholm said the city already is encountering issues with people violating no-wake zones near the Foothills Dock, and there’s been substantial damage to city and community assets like the Foothills Dock and Charlie S. Brown Water Sports Center along the river. The WSP has experienced more than $150,000 worth of damage to docks and boathouses due to large wakes from motorized watercrafts, according to Anderholm.

Shawn Karambelas, Lake Oswego resident and owner of SK Watercraft Rentals, said he is against the Marine Board’s decision on the new regulations. Karambelas said he thinks the decision will negatively impact his business, which sits in the new pass-through zone between Ross Island and Tilikum Crossing in Portland.

Karambelas has a home on the Willamette River and commutes to work by watercraft. In summer, he pulls his children on innertubes from his personal dock.

“This, to me, is sad,” said Karambelas, adding that the area where the new pass-through zone is located is much larger than in Lake Oswego where the river is more narrow. “I wouldn’t attempt to pull a child on a tube through that area. I think it gets even worse for congestion.

“How they chose this area (from the Hawthorne Bridge to Waverly Marina) is beyond me.”

Lake Oswego’s Parks and Recreation Department composed a letter that was sent to the Marine Board expressing their concerns as public testimony.

City, has reported danger to rowers and equipment due to heavy wake traffic and have reported boaters disobeying wake zones and disregarding safety of the rowers,” the letter read. “Reports of unsafe conditions at Roehr and Foothills docks are caused by narrow channel and lower water levels during the summer months. The traffic from motorized watercrafts and turbulence of the water cause water spouts between deck boards and the docks become wet, slippery and unsteady for walking.”

The city of Milwaukie also sent a letter urging the Marine Board to consider regulations that were not part of the initial proposal.

During Milwaukie’s Jan. 19 City Council meeting, the council unanimously approved the letter for public testimony, which encouraged a no-wake zone in Milwaukie Bay and around Elk Rock Island.

“It’s important that the Marine Board hear from as many people as possible, since we’re asking for something that was not part of their proposal,” said Councilor Lisa Batey during the meeting.

Milwaukie leaders said the city wasn’t adequately consulted in the process. The letter said that water sports activities would be restricted to north of Milwaukie in the pass-through zone, which would push “more boaters from Willamette Park and elsewhere in Portland to Milwaukie and Clackamas County. We cannot support the rule as currently written but would support it if the OSMB amends the rule to create a ‘no wake zone’ in Milwaukie Bay and around Elk Rock Island,” the letter read.

In the letter, Milwaukie leaders said over the years there’s been an increase in swimmers and human-powered vessels like paddleboarders and kayakers in Milwaukie Bay.

“Every boating season, we hear concerns from residents who have had frightening encounters with boaters and the wakes they create,” the letter read. “In April 2020, a healthy young athlete drowned in Milwaukie Bay after falling out of his kayak. His fall into the water was never conclusively determined to be caused by a wake, but some who witnessed it believe it was.”

The city said the regulations do not address or protect erosion on shorelines.

“We believe areas like the shore of Elk Rock Island and Milwaukie Bay are just as poised for both harmful erosion and dangerous conflicts between motorized and non-motorized river users,” the letter read.

“They really took the scenic route, but they got to adopting the initial proposal,” said Josh Mulhollem, environmental and policy program manager.

Mulhollem added that in the next month or so, the board will file the new rules with the secretary of state, and they are expected to go into effect May 1.

“I believe that the testimony provided by those municipalities played a role in informing the decisions of the Board Members and may have influenced the final outcome,” Mulhollem said in an email to Pamplin Media Group. “However, no additional Board actions for the Lower Willamette River are currently planned, and the Board has indicated that they would like to see the new rules implemented and evaluated before they potentially consider additional/amended regulations.

“Those cities, or any other member of the public, for that matter, could petition the Marine Board for additional regulations, although I think it is unlikely that such a petition will be accepted so soon after a lengthy rulemaking process.”

You count on us to stay informed and we depend on you to fund our efforts. Quality local journalism takes time and money. Please support us to protect the future of community journalism.