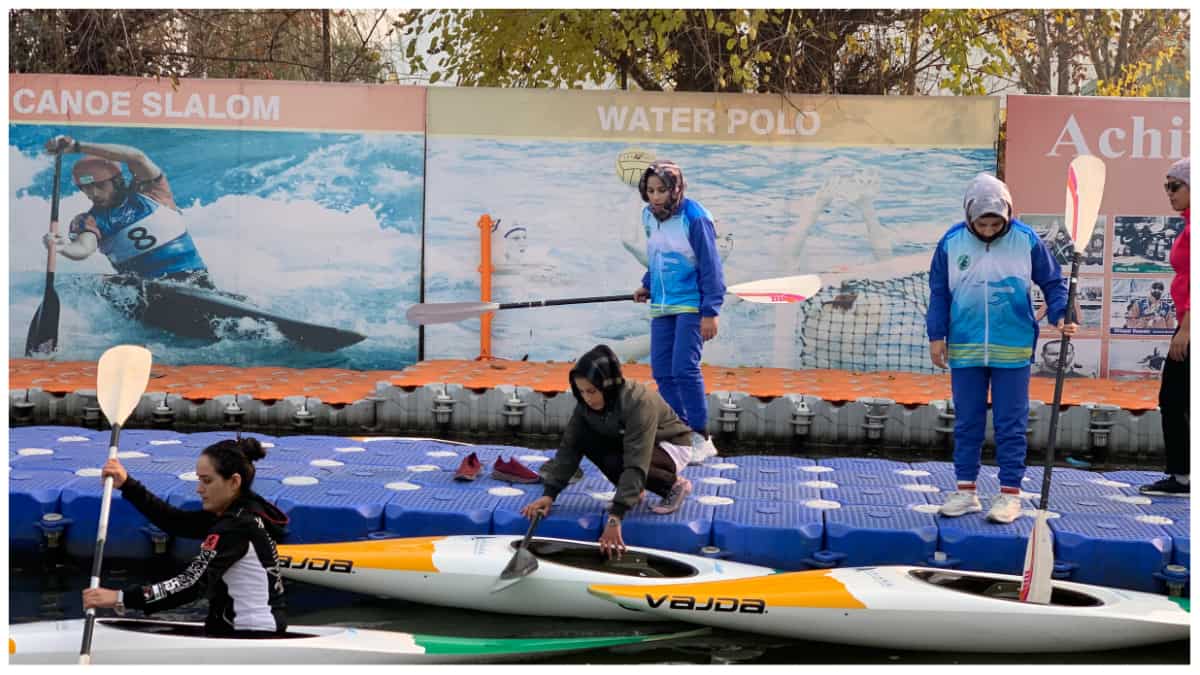 Female athletes from the Kashmir Valley have proven their mettle in various sports across the world. And now for the first time, Over 200 female athletes are being trained at the water sports centre in the middle of the world-Famous Dal Lake to participate in tournaments across India and the world.  While the temperatures in Srinagar were recorded at minus 2.2 degrees, these female water sports athletes are not stopping their training. With freezing temperatures across the region, these girls are training for hours every day on the Dal Lake. From rowing to Canoeing, these Kashmiri girls want to bring laurels for the country.

In the last two years over 70 medals in various tournaments have been won by these female athletes.  ”If we talk about the last two or three years, there has been a huge increase in the number of female participations in water sports. There have been around 110 medals won by water sports athletes and over 50 percent of these medals are taken by female athletes. Earlier, everyone used to say that water sports are not for women, It was a challenging role for me also when I started. There is a revolution in women participation in Kashmir and soon we will see these girls’ winning medals in national and international tournaments,” said Bilquis Mir Director Water Sports.

Bilquis is among the topmost water sports athletes from the valley herself. She was also a judge on the panel both at the Olympics as well as Asian games. She has represented Kashmir at Various international tournaments and won dozens of medals. And now she not only trains but inspires Kashmiri girls to pick up water sports as their career. She says Kashmiri girls have a lot of natural strength and can-do wonders in the water sports. She is not only looking at the city but rural areas searching for the talent to be part of the sports.

”It’s winter and minus temperatures and despite that these girls are training for hours every day on the lake. I have trained over 200 female athletes, and I think there is so much talent especially in the rural areas in the Kashmir region. There is natural strength in the girls of the valley. We have a world class facility available in Kashmir. We are blessed with natural water resources both wild and still. Government has taken huge steps with regard to water sports,” said Bilquis Mir, Director Water Sports.

The training continues everyday despite the harsh weather conditions. Girls from every district of the Kashmir region are being trained at this facility. These girls only hope to represent India at the International championships and win laurels for the country.

”My first national tournament was in 2014 and we were able to win a gold in that championship. And that was when I decided that sports is going to be my priority.  I have played a lot of National tournaments so far and now I am focussed on International championships. I urge all the girls that sports are great for us. We can make a career out of it so that we are not dependent on anyone. I am sure Kashmiri girls will soon represent India at International level. We have the best equipment and due to that we are able to practice nicely,” said Sumaira Bashir, Athlete.

And with such an increase in the number of female sportswomen in water sports, more and more girls are getting interested in joining the sport. And nothing is stopping these girls from training as the national tournaments are approaching. Some of these athletes have also been provided jobs under the sports category and adjusted in the water sports department.

”I started my sports journey in 2014, since I live on the lake, I saw Bilquis Mam training here. She once asked me to join the sports and I said yes. I was sitting at home, and I decided to join and I am glad I did. My dream is to play at international level, and we are practising very hard. It’s extremely cold and temperatures are below zero but despite that we are training. We can’t stop training as nationals are approaching. Girls are everywhere, and I ask young girls to join the water sports and I am also getting a job due to this, ” said Peer Mehak, Athlete.

The water sports department is now using natural water bodies across various districts of Kashmir region to train the athletes. Lakes like Wular, Manasbal, Ranjeet Sagar and Dal Lake are being utilised for training the young water sports athletes.