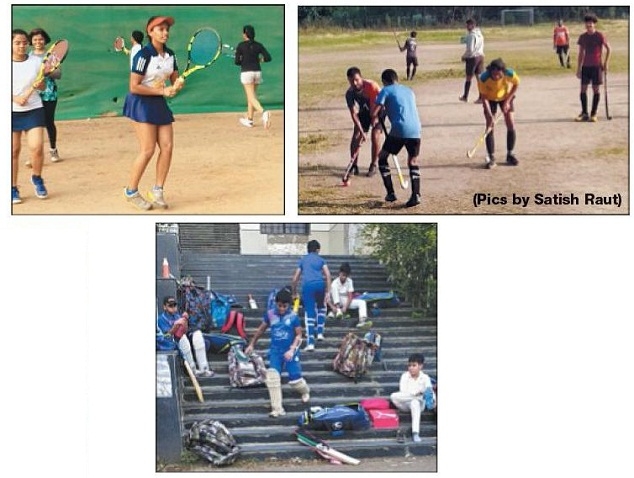 THE latest order on resumption of outdoor sporting events by Nagpur Municipal Commissioner Office brought smiles on faces of city’s sportspersons and sports organisers alike. In the first phase of Unlock 2.0, only outdoor activities have been permitted. Players were seen enjoying sports like lawn tennis, cricket, basketball and volleyball. Those interested in indoor sports like badminton and table tennis were left high and dry and the situation was same for swimmers as swimming pools across state remained closed. Tennis players and members of the Nagpur District Hardcourt Tennis Association (NDHTA) were delighted as the latter announced reopening of the Maharashtra State Lawn Tennis Association (MSLTA) Tennis Academy, Ramnagar.

“As soon as the order from the NMC Commissioner Mr Radhakrishnan B (regarding Unlock 2.0) was released, it brought smiles to the sports fraternity of Nagpur. “Especially so with lawn tennis lovers, since they were denied their favourite sport ever since March 15 when the second wave of COVID-19 was spreading in the city,” said a press release issued by Vijay Naidu, Treasurer, NDHTA. NDHTA announced reopening of the MSLTA Tennis Academy, Ramnagar, for tennis players from Monday as per the guidelines of the NMC. The academy will remain open from 6.00 am to 9.00 am and in the evenings from 5.00 pm to 8.00 pm. The academy will be open all seven days of the week. This brought a sense of relief and joy amongst the players, young and old. Dr Rajesh Singhvi, General Surgeon, who is a regular player, said he is overjoyed, and was looking forward to playing his favourite sport. Sejal Bhutada, emerging talent from Nagpur in the U-12 age group, is a ranked player and was missing her daily routine. Now, she feels confident as tournaments are lined up for her across the country.

Sai Bhoyar who is a national ranking player in U-18 was seen at practice in the morning, and will soon leave for her round of tournaments. “I am very happy to be on courts again. Due to pandemic, there was a break in practice for 2-3 months. Also I had to skip U-18 National Series and couple of Junior ITF in months of March and April. I am looking forward for the coming season. U-18 Nationals is scheduled at Chennai in August and Khelo India Youth Games are scheduled in Haryana in November 21,” said Sai. Ganesh Kshirsager, a veteran player, was overjoyed to resume his daily practice sessions. Architect Subodh Sathe, also a regular player along with his entire family, who used to practice at his residence in a makeshift arrangement during the lockdown, was delighted to be back on the courts. Dr Sudhir Bhiwapurkar, Secretary, NDHTA and Treasurer of MSLTA, was happy that the reopening coincided with the French Open Grand Slam tournament being played in Paris.

He was looking forward to organising tournaments locally for players. “The coaching team of Jai, Vishal, Navin and Suraj are excited to see their regular pupil back on courts. They are toiling hard to prepare the courts with the markets and staff. If the situation in Nagpur and district stays under control, we will soon be able to organise tournaments and further develop the sport of lawn tennis,” Dr Sudhir Bhiwapurkar said.