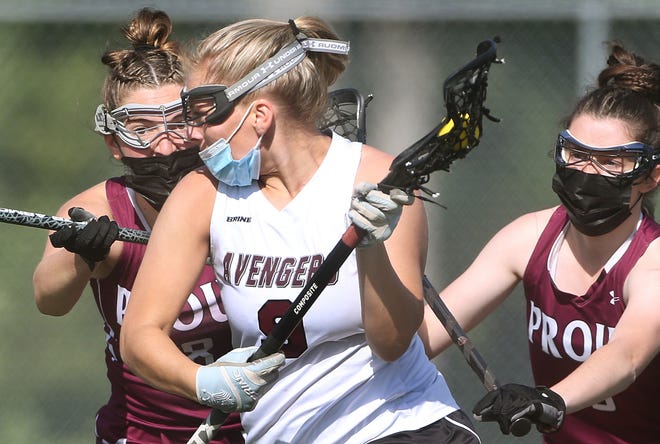 While Rhode Islanders have the green light to ditch their face coverings in most places indoors and outdoors, the state is still requiring young people to mask up while playing outdoor sports until at least July 1.

That decision has some parents, coaches and players baffled, especially since the Massachusetts Interscholastic Athletic Association last week dropped its mask requirement for all outdoor sports.

“These poor kids have been really pummeled the last year and a half,” said Sheryl Green, a parent of two high-school-aged daughters who play sports. “It’s at the point we have so much information and data now that we just can’t figure out why the pandemic is kind of over for everyone else, except for them.”

More:New question in RI: mask or no mask? Here’s how some folks are making the decision.

More:Fully-vaccinated people across New England can shed masks indoors, mostly, by end of the month

At his briefing last week, Gov. Dan McKee said the mask mandate — required if athletes cannot keep a distance of at least three feet — will continue until the end of the school year. While tennis and golf are not affected, lacrosse and youth soccer leagues are. Batters, umpires and catchers for baseball and softball also need to wear masks because of the three-foot rule.

Some parents who spoke with the Hummel Report this week said health officials are not taking into account the challenge of playing some sports with a mask, and the emotional toll it is taking on their children. One father said his son gave up playing baseball this year because of the continued restrictions.

“We have scared the kids to death with these masks. And they need to come off now,” said Green, a physical-education and health teacher who has followed the data on the Rhode Island Department of Health’s website over the last year. “The numbers are so low for the kids and it’s obvious their spread is so minimal.”

Questioned about it by The Hummel Report at the briefing, Health Department Director Dr. Nicole Alexander-Scott said the state is following guidance from the federal Centers for Disease Control.

Massachusetts has taken a different tack. While Gov. Charlie Baker’s full reopening for the Bay State doesn’t take effect until Saturday, the state’s Interscholastic Athletic Association got a head start, saying last week that athletes on spring teams in active play outdoors, or on the bench in a dugout, do not have to wear masks.

“Things have rapidly changed in the last couple of weeks,” said Mike Lunney, executive director of the Rhode Island Interscholastic League, which is taking its cues from the Health Department. “It’s obvious that people are saying we’ve got all of this freedom in a lot of different areas, why can’t we do this?”

Lunney said speaks regularly with the health department and Department of Environmental Management Director Janet Coit, who was tapped by Gov. Gina Raimondo a year ago to work on COVID-related issues around sports. Lunney said he is hoping there may be some modifications before the spring season playoffs begin next month.

This year’s spring sports season is being extended by three weeks, with championship weekends slated for the end of June. Lunney said it has a been a challenge for some athletes playing in hot weather.

Lunney, who participates in a weekly conference call with his counterparts in the Northeast, said that while New Hampshire and Massachusetts are not mandating masks for high-school athletes, Vermont has extended the requirement through the end of the school year.

Green said she heard about a lacrosse game over the weekend — played in 90-degree heat — where the referees were strict about having the players keep their mouths and noses covered, and that some of the players struggled.

“Any game played has a different feeling out there with a mask on,” Lunney said. “Even though it’s uncomfortable normally, it’s even more uncomfortable because of the heat. We heard about that.”

Green said she is frustrated because no one seems to want to take responsibility for the mask rule, even though she believes the science and data does not support the requirement.

“Everyone passes the buck,” Green said, adding that she hopes the governor considers removing the mandate before the end of the spring season.

The Hummel Report is a 501(c)(3) nonprofit organization that relies, in part, on donations. For more information, go to HummelReport.org. Reach Jim at [email protected]

Is it safe to attend sports games during Covid pandemic? Fauci advice