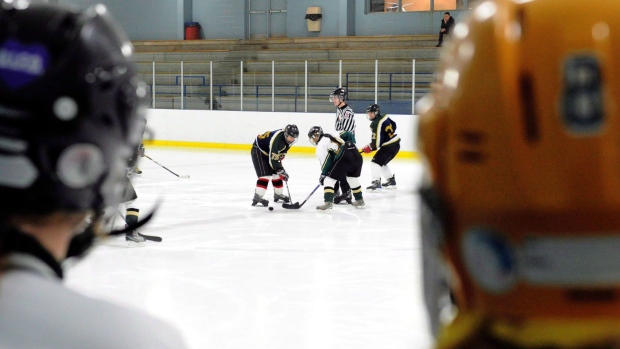 OTTAWA —
Ottawa’s medical officer of health says the public health unit is investigating the spread of COVID-19 in organized team sports in the city.

“Ottawa Public Health is investigating several situations where transmission of COVID-19 has occurred in relation to organized team sports,” Dr. Vera Etches said at a press conference Wednesday morning. “COVID-19 transmission is occurring in both adult’s and children’s leagues and in a variety of sports.”

Dr. Etches told reporters said Ottawa Public Health investigating 14 teams where at least two people have tested positive for COVID-19 to determine if the virus spread within the team setting.

“We have confirmed five outbreaks for sure and we have others under investigation,” she said, referring to cases in which viral transmission from one member of a team to another was confirmed.

According to Ottawa Public Health’s COVID-19 dashboard, which updated Wednesday to include sports and recreational outbreaks, there are five open outbreaks with 25 cases total. The dashboard does not say where or when these outbreaks occurred. Dr. Etches said the teams involved would not be named, but added that the five outbreaks are related to indoor activities.

She stressed that the number of close contacts related to these outbreaks is in the hundreds.

“The number of high-risk contacts is hundreds and hundreds,” she said. “These are people we have identified who have been in close contact with someone who tested positive, who need to self-isolate and then go for testing themselves five days after exposure. This investigation will be continuing and we expect those numbers to grow.”

She said among these contacts, there are vulnerable people, such as older adults and others.

While Dr. Etches said that the risk of transmission could occur in any setting where there is close contact or limited mask use, two sports stand out in particular.

“Hockey is showing up and football is showing up,” she said. “It’s possible in any kind of sport where there is close contact and no masks but hockey is standing out as the one where we’ve detected the highest number of people testing positive right now.”

She says it’s not just team play during practices, but the social events that take place both before and after, such as carpooling or after-practice meals and drinks.

“It’s before the game, people carpooling together with people outside their household, during the game it’s practices where people are in contact with each other, after the game it’s people gathering and maybe sharing a meal with each other. It’s not just the play on the ice, for example, but other connections that are made, other close contacts in relation to the activity.”

Etches also pointed out locker room use, and people participating in more than one team sport as other vectors for transmission.

Her message is to reduce those kinds of contacts.

“OPH reminds residents that although training is still permitted, team sports and activities are still considered high risk,” Dr. Etches said. “COVID-19 does not distinguish between a game or a practice, so it is important to use the same core principles of mask wearing, physical distancing, handwashing, and staying home when sick to reduce the transmission of the virus.”

In a press release from the City of Ottawa, the following recommendations were made to help limit COVID-19 transmission in organized sports settings.