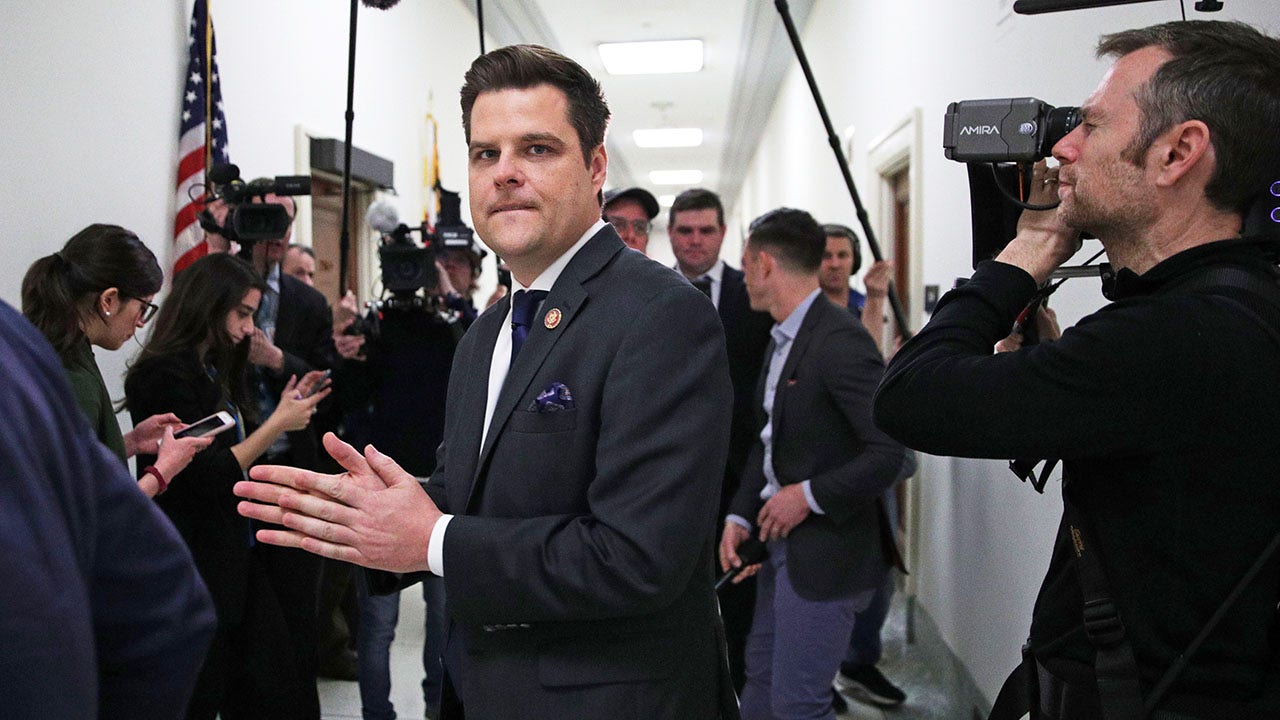 When Gaetz was a young state lawmaker in the Florida House of Representatives, he allegedly participated in a competition with fellow male lawmakers to earn points for their sexual conquests, the Business Insider reported Friday.

Having sex with married lawmakers and spending the night in a college sorority house earned the lawmakers extra points. And the ultimate prize was sleeping with one particular conservative woman, they dubbed the “snitch,” in a nod to the “Harry Potter” game of Quidditch, a Republican who worked with Gaetz in the 2010s revealed in an interview with the Insider.

The game was the “worst kept secret in Tallahassee,” the GOP insider said.

The sex competition in Tallahassee has been alleged before by Chris Latvala, a Republican state representative. During a 2020 Twitter feud with his former colleague, Latvala said Gaetz “created a game where members of the FL House got ‘points’ for sleeping with aides, interns, lobbyists, and married legislators.”

Gaetz replied to Latvala at the time, “just because I own you on twitter, don’t confuse me for your daddy when it comes to abusing power for sex.” That was a reference to Latvala’s father, Jack, who resigned from the Florida Senate in December 2017 amid sexual harassment allegations.

Gaetz’s past has come under renewed scrutiny this week amid a steady stream of damning headlines against the 38-year-old congressman — a top ally to former President Donald Trump who rose to national prominence as a TV-ready surrogate for the president’s causes.

Since a federal sex trafficking probe involving Gaetz was made public this week, more reports have surfaced about the conservative firebrand’s conduct around women.

In Congress, Gaetz would brag about his sexual escapades to his colleagues on the House floor and allegedly showed fellow lawmakers nude photos and videos of women he had slept with, CNN reported Thursday. One video Gaetz revealed to colleagues allegedly showed a naked woman with a hula hoop.

In Tallahassee, where Gaetz served from 2010 to 2016, some women allegedly referred to the young lawmaker as “Creepy Gaetz” because they were made uncomfortable by him, ABC News reported.

Years ago, the Miami Herald first reported on the scoring system that young male lawmakers had used to rank women, but didn’t name the lawmakers involved. There were special points given out in sexual conquests for “virgins,” a source told ABC News.

Gaetz was often seen trying to pick up young women at 101 Restaurant in Tallahassee, where students from nearby Florida State University would frequent, ABC News reported.

These past tales have emerged in recent days as Gaetz is faced with a federal criminal investigation that apparently started during the Trump Administration under former Attorney General William Barr. Despite the barrage of bad press — even losing his communications director on Friday — Gaetz has remained defiant.

“I’m not resigning,” Gaetz told the Washington Examiner on Friday.

Gaetz has suggested an ex-Justice Department official leaked the criminal investigation to the New York Times because Gaetz and his family would not participate in a $25 million extortion plot.

“It is a horrible allegation and it is a lie. The New York Times is running a story that I have traveled with a 17-year-old woman and that is verifiably false. People can look at my travel records and see that that is not the case. What is happening is an extortion of me and my family,” Gaetz told Fox News’ Tucker Carlson Tuesday night.

This undated handout photo provided by the family of Robert Levinson after they received it in April 2011, shows retired-FBI agent Robert Levinson. In March 2007, Levinson flew to Kish Island, an Iranian resort awah with tourists, smuggler and organized crime figures. Days later after a meeting with an admitted killer, he vanished. For years the U.S. has publicly described him as a private citizen who was traveling on private business. However, an Associated Press investigation reveals that Levinson was working for the CIA. (AP Photo/Levinson Family)

According to documents obtained and reported by the Washington Examiner, the alleged scheme revolves around attempts by former Air Force intelligence officer Bob Kent and Beggs & Lane attorney David McGee, a former federal prosecutor, to free Levinson. Levinson’s family has presumed him to be dead.

Kent reportedly sought a $25 million loan to fund an operation to rescue Levinson, and promised to help the congressman with legal woes in return. The money was to be transferred into a trust account of law firm Beggs & Lane, bearing the name of McGee, the Levinson family attorney.

Gaetz provided text message screenshots, an email, and a typed document to the Examiner to show the alleged extortion scheme that also involved his father, Don Gaetz, the wealthy former president of the Florida Senate.

In a document labeled “Project Homecoming” that Kent purportedly gave Don Gaetz, it outlined the feds’ alleged case against the congressman saying he’s “currently under investigation by the FBI for various public corruption and public integrity issues.”

If the Gaetz family paid the $25 million and Levinson is successfully freed from Iran, Gaetz would be on the plane that returns Levinson to freedom and be “given credit” for facilitating the release, the document said.

Gaetz told Fox News’ Tucker Carlson that his family had notified the FBI about the alleged extortion, naming McGee as being behind it. Gaetz said his father had worn a wire during a meeting as part of an investigation of the extortion claim, and that he believes the Times story had been leaked in order to thwart that investigation.

“It’s silly. I didn’t try to extort anything from anybody,” McGee told Fox News. “I’m not going to go much beyond that.”

Federal investigators are reportedly determining whether Gaetz and another Republican paid underage girls for sex or offered them gifts in exchange for sex. The New York Times reported the existence of the federal investigation on Tuesday first revealing that the feds had zeroed in on whether Gaetz had a sexual relationship with a 17-year-old girl and paid her to travel with him.

The Times and other outlets went on to report further details of the investigation that apparently started with Gaetz’s political ally, Joel Greenberg. Greenberg is a former GOP Florida tax collector who was indicted last year and is facing a slew of charges, including sex trafficking of a child.

FILE — In this Monday, Sept. 30, 2019, file photo, Seminole County Tax Collector Joel Greenberg talks to the Orlando Sentinel during an interview at his office in Lake Mary, Fla. Greenberg has implicated in an investigation with U.S. Rep. Matt Gaetz, R-Fla., for their involvement with multiple women who were recruited online and received cash payments for sex. (Joe Burbank/Orlando Sentinel via AP)
(AP)

The New York Times reported Friday that the investigation focuses on their alleged involvement with multiple women who were recruited online for sex and received cash payments.

Greenberg, a former tax collector in Seminole County, Fla., allegedly met the women through websites that connect people who go on dates in exchange for gifts, fine dining, travel and allowances, The Times reported. The investigation is looking at whether Greenberg introduced the women to Gaetz and whether the congressman had sex with them, the newspaper reported.

Federal prosecutors are reportedly focused on payments to the women through the mobile payment service Cash App.

Gaetz purportedly came to federal investigators’ attention after they learned he was spotted visiting a closed Seminole County Tax Collector’s Office on a weekend night with Greenberg back in 2018. Greenberg was there going through a basket of driver’s licenses that were turned in by residents for disposal, the Orlando Sentinel reported.

Feds allege Greenberg used fake IDs for individuals he was involved in “sugar daddy relationships” with and to engage in “commercial sex acts,” according to clickorlando.com. Greenberg has pleaded not guilty to the charges against him.

Gaetz’s office did not immediately respond to Fox News’ request for comment about the wave of new reports involving sex games, picture sharing and misconduct. But the congressman has repeatedly denied any criminal wrongdoing, including paying for sex and sleeping with underage women. He said he’s been the victim of a federal extortion plot.

CHEYENNE, WY – JANUARY 28: Rep. Matt Gaetz (R-FL) walks with his fiancee Ginger Luckey before speaking to a crowd during a rally against Rep. Liz Cheney (R-WY) on January 28, 2021 in Cheyenne, Wyoming. Gaetz added his voice to a growing effort to vote Cheney out of office after she voted in favor of impeaching Donald Trump. (Photo by Michael Ciaglo/Getty Images)
(Getty Images)

Gaetz proposed to Ginger Luckey, a 26-year-old food analyst, at Mar-a-lago in December 2020. The couple met at Trump’s Florida club earlier that year.