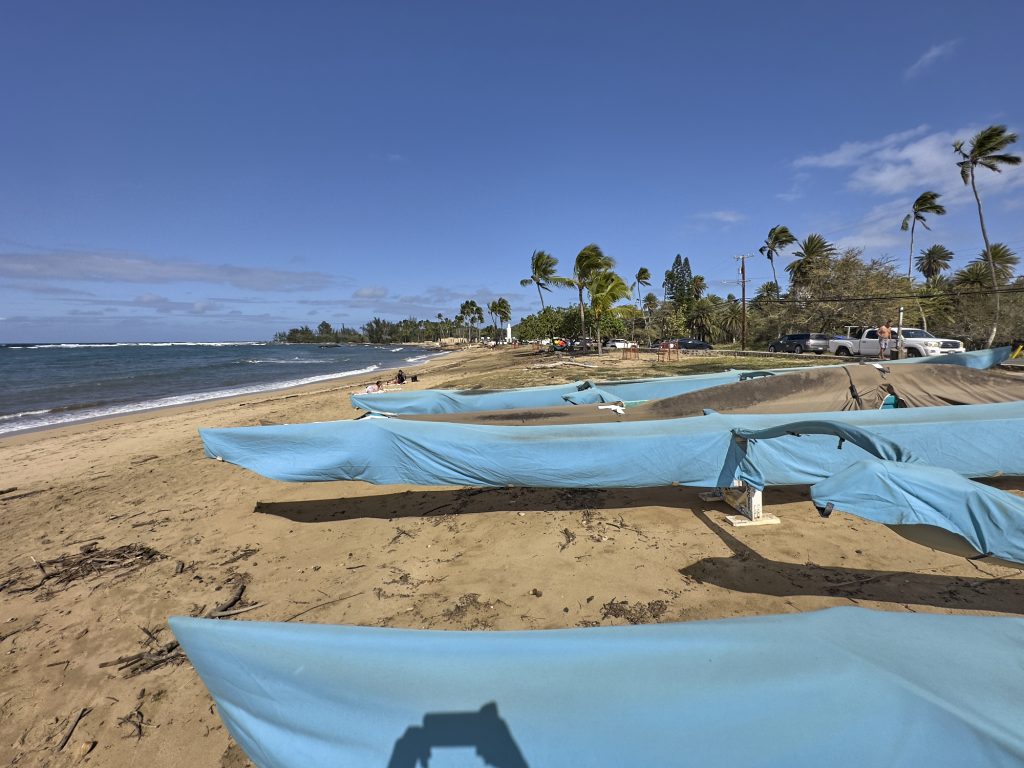 How long does it take to build a canoe halau?

That’s the question North Shore paddlers have been asking for over 10 years, since the city first committed funding for it. The money languished until Mayor Rick Blangiardi released it earlier this year.

The city’s Department of Design and Construction will now design the structure and put it out for bid, according to Nathan Serota, spokesman for the Honolulu Department of Parks and Recreation.

Halaus serve not just as storage areas from hostile elements like ocean waves and hull-cracking ultraviolet rays but also as places to refurbish traditional canoes and gather as a community. Fiberglass racing canoes can each cost more than $20,000 to replace.

And the issue goes deeper than finance.

“This is our history and culture and our keiki that we’re trying to teach,” said Dave Fuga, president of Manu O Ke Kai Canoe Club in Haleiwa.

Paddlers on the North Shore say they’ve been underserved despite the area’s status as a hub for water sports.

“We had to come here yesterday in the storming weather and slide our canoes up the beach,” Fuga said after a recent December weekend. “Me and my daughter sat here all night long and just kind of hoped that the surf wasn’t going to come up and take our canoes away.”

Fuga was athletic growing up but not a paddler. His sister coached paddling at the Waimanalo Canoe Club and convinced him to try the sport for a week when he was about 20. She promised she’d never bring it up again if he didn’t like it, “and I’ve been paddling ever since,” Fuga said.

The sheer physicality wasn’t the only thing that appealed to him.

“After a couple of days, you feel you get that connection with your culture. Like, this is what my ancestors used to do,” said Fuga.

Manu O Ke Kai does have a decades-old canoe halau built by the club’s founder “Uncle Randy” Sanborn and recently refurbished by current members. But Fuga thinks it’s still a far cry from the rest of the island’s city built and halaus.

Fiberglass particles would be practically impossible to remove from their current dirt floor, said Fuga, putting them at risk of contaminating the environment. Sweeping would be much easier over smoother concrete floors and a bigger facility would allow more canoe storage.

But he also acknowledged that Manu O Ke Kai is lucky compared to other clubs like Haleiwa Outrigger, the North Shore’s other smaller canoe club.

Haleiwa Outrigger has no halau of any sort, meaning their canoes line a sliver of beach along Kamehameha Highway. It has a month-to-month revocable permit from the Department of Land and Natural Resources allowing them to keep their equipment on the beach.

Without a designated indoor storage space some of their paddling equipment is just held by members of the club,  said president of Haleiwa Outrigger Mai Tani Waye.

“Everything’s everywhere, because we don’t have one place to put it,” she said.

Even Hawaii Kai has some canoes outside its gated and locked halau, because the other 36 slots are already filled.

Mauka of Kamehameha Highway from Haleiwa Outrigger’s canoes lies the parcel of land where the clubs envision their halau being built.

It’s a parcel with some history.

The city bought it as park land decades ago but never ended up using it. In 2012, former state Sen. D.G. “Andy” Anderson proposed building a hotel there, vexing many community members as they imagined the extra traffic this would bring to already strained infrastructure.

“Wouldn’t it make more sense to utilize this area for the benefit of the paddling community, which does so much for our children and families in the area? What an invaluable resource and way to perpetuate the culture,” said local Blake McElheny.

A coalition fought back, convincing the city to not sell the land and instead commit to constructing a canoe halau. The council approved a budget in 2012 that allocated money for its construction, along with other halaus in Kaneohe and Kahaluu.

This is a long process, emphasized Serota. The halau’s proposed location in a flood zone necessitates extra considerations. And new construction is intrinsically more complicated than just renovating an existing structure.

Even if everything stays on course, the North Shore paddling community likely won’t be using their city-constructed halau for several years, he said.

Sign up for our FREE morning newsletter and face each day more informed.