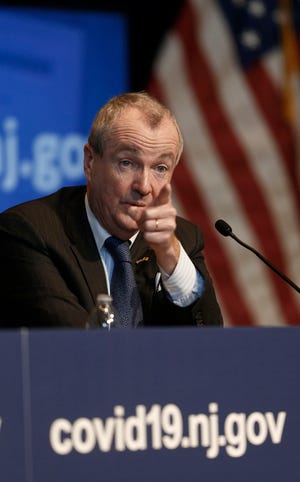 Murphy’s executive order on the suspension of all indoor sports activities for the scholastic, youth and adult recreational levels was due to expire Saturday. It went into effect Dec. 5.

”Given the safety protocols we have in place and the stability in our numbers (COVID reported cases) over the last month, although stability at an uncomfortably high level, we feel confident we can move forward by continuing to deal with any outbreaks or other issues on an individual case basis as opposed to a blanket prohibition,” Murphy said.

Murphy said a cancellation of high school sports seasons would have been a strong possibility had he extended the suspension. The NJSIAA’s 2020 spring sports season was canceled due to the pandemic.

“We do not wish to see that happen,” Murphy said Wednesday. “We know sports are important for both the physical and mental wellness of our youth and our other residents. We will continue to closely watch the outbreak data and reserve the right to pull this back if we must.”

Murphy said there was discussion about extending the pause to Jan. 9 or Jan. 16, but he indicated he and his administration did not see any evidence the numbers would be much different.

“As long as folks play it straight, they play it right, they do the right things, we’re open for business on Jan. 2,” Murphy said.

Murphy said no fans will be allowed to attend games and practices if the number of athletes, coaches, officials and school site directors exceeded 10.

“That brings me no joy to say that, but that’s the way it’s got to be,” Murphy said.  “We’re going to be watching this. We have to watch this. All options remain on the table.”

Ice hockey was the only high school sport affected by Murphy’s executive order. But, after the order was issued, the NJSIAA pushed the start of that season back to Jan. 15 with the start of indoor practices on Sunday.

“NJSIAA welcomes the governor’s announcement and continued support, and looks forward to the beginning of the indoor, winter, scholastic sports season – specifically, NJSIAA Season 2,” the organization said in a statement.

Ice hockey teams have been able to practice outside and meet virtually since Dec. 14.

Cooper:Predicting what will happen in North Jersey high school sports in 2021

The NJSIAA had previously announced other winter scholastic sports seasons would begin in late January or later.

Basketball and fencing will get underway Jan. 26 with a Jan. 11 start date for practice. Those seasons will conclude March 6.

Swimming and winter track will begin Feb. 16 with a Feb. 1 start date for practice. Those seasons will conclude March 27.

Wrestling, girls volleyball and gymnastics will begin March 16 with a March 1 start date for practice. Those seasons will conclude April 24.

The NJSIAA had already moved girls volleyball and gymnastics – normally fall sports – to what it is calling Season 3 later in the winter.

The ban on out-of-state youth sports competition will continue, Murphy said. Collegiate and professional sports teams are not affected by the ban.

“We know intrastate travel and associated activities among teams are particularly risky, as these settings create opportunities for the virus to spread,” Murphy said. “We continue to work with our colleagues in Maine, Rhode Island, New Hampshire, Vermont, Connecticut and Massachusetts to maintain the regional compact prohibiting (interstate) youth hockey that we announced Nov. 12.”