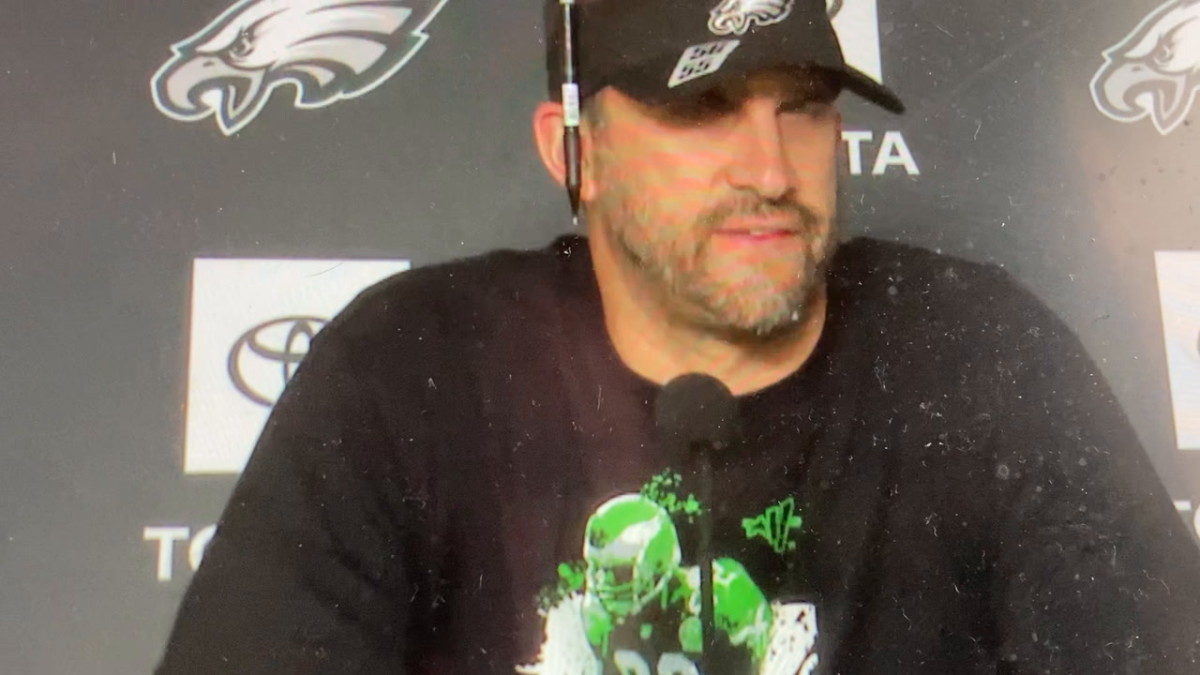 For a brief moment, the thought was, did he get confused and think it was Thursday when Pitt and Kenny Pickett hosted North Carolina and Sam Howell? That was the one his boss, general manager Howie Roseman, attended.

When asked what he was referring to, Sirianni said “Villanova-UCLA.”

Yes, college basketball has begun dribbling toward March and the Wildcats and Bruins will play Friday night at 11:30.

Sirianni wore a Reggie White T-shirt, but said that there are plenty of Villanova basketballs in-house.

The Eagles, though, have a big game in their own right in Denver on Sunday.

They head into the final eight games of the season at 3-6 and with eight games still to play, they have to string together some wins to get back into the playoff picture of an expanded postseason field.

Everybody was a full participant at Friday’s practice, though Sirianni said that defensive end Josh Sweat (concussion) and left tackle Andre Dillard will be listed as questionable.

Dillard was a surprise since he had not been on the injury report all week.

Sirianni said it was something that happened at practice but didn’t elaborate.

Dillard was listed on the injury report as questionable with a knee.

The Eagles showed positive signs in a close loss to the Los Angeles Chargers last week, losing 27-24 on a field goal from Dustin Hopkins with two seconds left.

The Broncos are 5-4 and in the thick of the AFC West race, with every team in the division having won five games. Denver has won two straight, both against NFC East opponents Washington and Dallas, after losing four in a row.

“Never forget that dark place that we were in a couple of weeks ago,” said Broncos QB Teddy Bridgewater earlier in the week. “This is a time in sports where it can be dangerous. Just a couple of weeks ago, you were hearing, ‘Aw, you guys suck. Get rid of this person. Trade this guy.’ And then you win a game or two and it’s like, ‘Oh, you’re the best,’ this and that.

The Eagles are certainly being tested now.

Another test for them will be dealing with the thin air in Denver. Playing at altitude can leave a player breathless sooner than he is accustomed to.

It is something linebacker Davion Taylor talked about during the week. Taylor played at the University of Colorado.

Sirianni said he is not an expert on that but has resources available to him to get a handle on how to deal with it. He said one thing the team will do is go to Denver later on Saturday than the time they usually arrive for road games but didn’t say why that would be an advantage.

“We have a very detailed plan of things we’ve done at the very beg of the week…all the way to where we are Friday,” he said. “…every detail, every resource we’ve had available for us, all the research has been done and we use that information.”

Ed Kracz is the publisher of SI.com’s Eagle Maven and co-host of the Eagles Unfiltered Podcast. Check out the latest Eagles news at www.SI.com/NFL/Eagles or www.eaglemaven.com and please follow him on Twitter: @kracze.