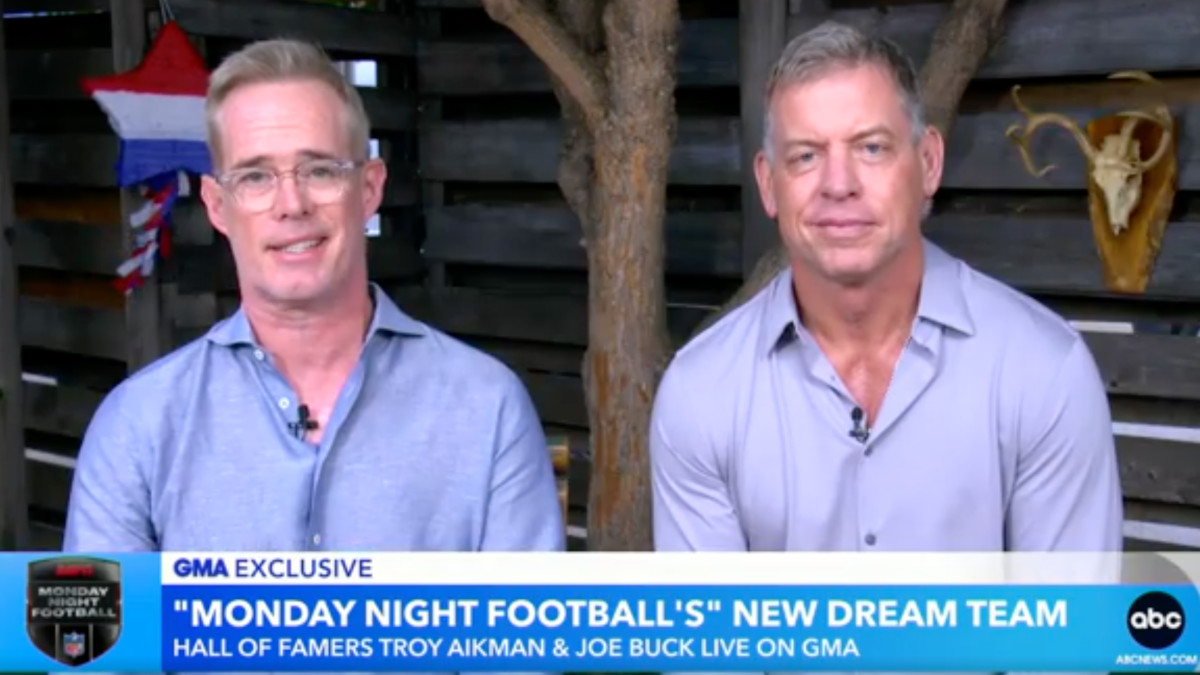 1. The NFL’s stranglehold on this country will be on full display this week as the league gets ready to release its 2022 schedule on Thursday night.

Of course, the schedule is being leaked out in dribs and drabs in the lead up to the official announcement. Last week the international games were released, and two weeks ago we found out Chargers–Chiefs will be the first Thursday night game on Amazon Prime.

Early on Monday, ABC/ESPN announced that it will feature a doubleheader in Week 2.

The night will kick off with Titans at Bills at 7:15 on ESPN, followed by the Vikings at the Eagles at 8:30 on ABC.

Remember, this is happening in Week 2, not Week 1. Week 1 will feature just one Monday Night Football game that will be simulcast on ABC and ESPN.

What else you need to know: ESPN has not yet announced which game its new MNF broadcast team of Joe Buck and Troy Aikman will call in Week 2. We also don’t know who will call the other game that evening.

Chris Fowler and Kirk Herbstreit would’ve been the obvious choice to call the second game, but Herbstreit is now doing the Thursday night games for Amazon. Could Herbstreit do Chargers-Chiefs on Thursday, College GameDay on Saturday morning, a college football game Saturday afternoon or night and then Monday Night Football in either Buffalo or Philadelphia?

Sure. It would be the safest choice for ESPN. If the network wants to go in a different direction, it can use another one of its college crews or put together a booth with some of its NFL studio hosts, such as Dan Orlovsky, Ryan Clark or Marcus Spears.

ABC/ESPN went full synergy on Monday, using Buck and Aikman to make the official doubleheader announcement on Good Morning America. The segment ended on a funny note with Aikman seeming to be legitimately stunned that his Monday Night Football record wasn’t nearly as good as he remembered.

2. Richard Jefferson, a must-follow on TikTok, shared a funny story over the weekend about a team pulling a catfish prank on a rookie years ago.

3. This is an outstanding article by Grant Marek of SFGate.com on how radio host Colin Cowherd spent years ripping Draymond Green but then started singing Green’s praises once the Warriors star joined Cowherd’s podcast network.

4. Good news for the Angels: They had a walkoff 5–4 win against the Nationals after scoring three runs in the bottom of the ninth on Sunday.

Bad news for the Angels: They had a major Gatorade bath fail after the win.

5. Yankees infielder Gleyber Torres hit a walkoff home run against the Rangers in the first game of a doubleheader on Sunday. Afterward, Texas manager Chris Woodward acted like a sore loser, complaining about the Yankee Stadium dimensions.

6. This week’s Sports Illustrated Media Podcast features a conversation with Katie Nolan, who is part of MLB coverage on Apple TV+.

Nolan discusses how she got the job with Apple, what Apple is trying to accomplish with its broadcasts, understanding that traditional MLB fans may not get the telecast, how she prepares for each game and the time she stayed silent for several innings after reading backlash on social media.

Nolan also opens up about her time at ESPN, what she liked about working there, whether she thought ESPN knew how to use her and what she has learned about navigating the sports media business.

You can listen to the podcast below or download it on Apple, Spotify and Google.

7. RANDOM VIDEO OF THE DAY: Happy 73rd Birthday, Billy Joel. This is still one of the coolest things I’ve ever experienced.

Be sure to catch up on past editions of Traina Thoughts and check out the Sports Illustrated Media Podcast hosted by Jimmy Traina on Apple, Spotify or Google. You can also follow Jimmy on Twitter, Instagram and TikTok.