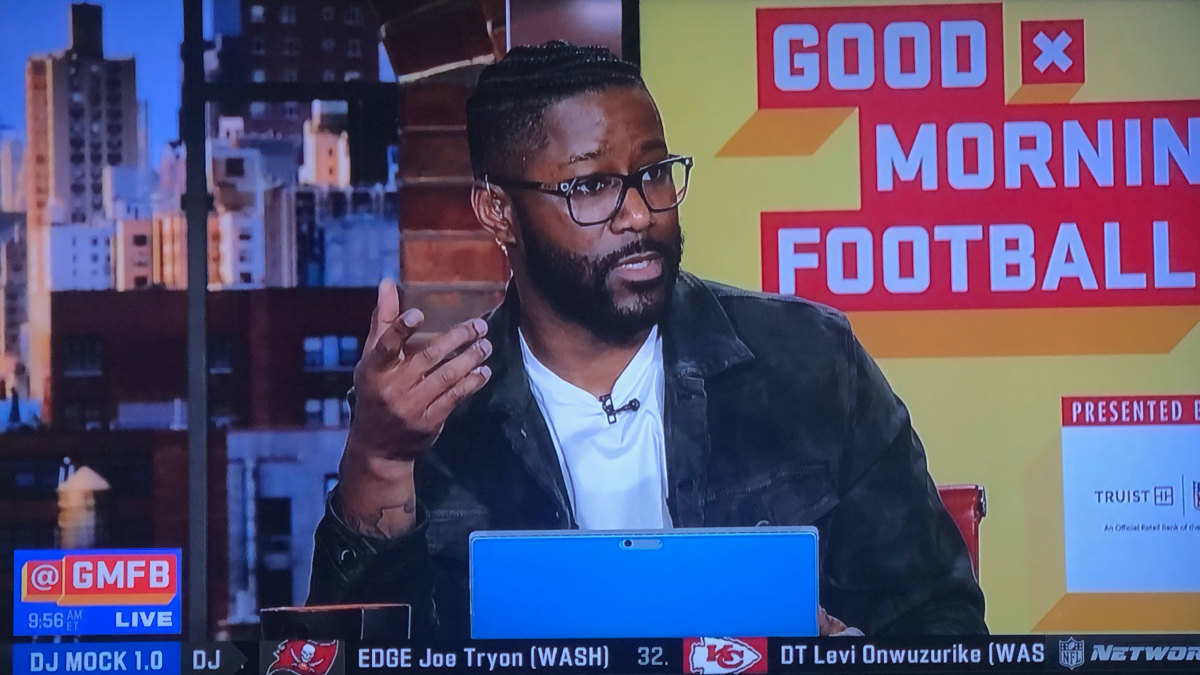 1. At the very end of Wednesday’s Good Morning Football, Nate Burleson quickly changed the topic from the Senior Bowl to the disturbing arrest of Seahawks offensive lineman Chad Wheeler.

Wheeler was arrested Monday night on suspicion of felony domestic violence and released Tuesday on $400,000 bail. According to the police report, Wheeler assaulted his girlfriend after he told her to bow to him and she refused. Obviously, this is not a story the NFL wants plastered all over its network, especially in the lead-up to the Super Bowl. But, thankfully, that didn’t stop Burleson from going off script and addressing the ugly story.

Burleson said on the air that his cohosts—Kay Adams, Peter Schrager and Kyle Brandt—and the show’s producers didn’t know he was about to change direction and bring up Wheeler’s domestic violence arrest. Here’s what he said:

“Mark my words. If somebody balls out at the Senior Bowl, they will ball out in the NFL. But guys, I have to take a hard left turn. There’s something that’s been in my heart and I hate to do this at the end of the show, but something disturbing that happened in Seattle. There’s a lineman, Chad Wheeler, that put his hands on his girlfriend. And being a Seattle Seahawk, I feel like our show never shies away from these tough topics and I didn’t want to right now. I know it’s probably catching you guys off guard, but I didn’t want to go three hours and not mention it. Domestic violence is a small reflection of the NFL. There’s more good guys than bad guys. It’s also a reflection of society. We often say there’s no room in the game for that. We should just always say there’s no room in society for that. I just hope that authorities in Seattle and the NFL handle this properly. I hate to do this at the end of the show, but we went three hours and didn’t address. I just want to make sure we talk about domestic violence because it is an issue.”

For Burleson to mention Wheeler’s arrest without his coworkers or producers knowing he was going to do so took guts. And it shows why Burleson is a rising star in the sports media world. Not many people would risk angering the higher-ups by going rogue. Remember, he did this on NFL Network.

I spoke to Burleson after the show and asked whether he had gotten any blowback from his bosses for bringing up Wheeler’s arrest. “I did get a call after the show,” Burleson said, “but nobody said I shouldn’t have done it. …They just said, ‘We don’t mind you taking a stand like that. Just give us a heads-up so we can give you the proper room to speak on it.’ You know, we had a graphic up on screen about the Senior Bowl when I brought it up. But nobody said I shouldn’t have done it.”

Burleson added, “It was heavy on my heart. As I was going through the show, I thought, ‘We haven’t touched on it and it’s been a couple of days.’ I wanted to make sure we handle every situation like this the same across the board. I don’t take domestic violence lightly. We talk about it in many forms.

“I didn’t want to grandstand or say this guy should be thrown out of the league. This isn’t black vs. white, old vs. young, starter vs. backup. It’s right vs. wrong.”

2. If you’re a Warriors fan, you might want to start sending Steph Curry hate tweets during games.

Andrew Bogut revealed on the Rogue Bogues podcast that Curry would check Twitter during halftime of games for motivation.

“Steph’s one of the elite as far as preparing for games,” said Bogut. “He’s one of the unique ones where … he’ll check his mentions at halftime when he has a bad half. It’s kind of the craziest sh– I ever saw. When I first came into the league, phones were kind of frowned upon in the locker room for the most part. Now, it’s a f—ing s— show.

3. I don’t understand how so many people still get worked up about a museum that long ago lost credibility.

More people need to be like former MLB pitcher Dan Haren, who was on the ballot, but uh, fell shy of getting in. From the beginning of this process, Haren, who was 153–131 with a 3.75 ERA over 13 seasons, has provided the commentary we all need.

4. J.J. Watt appeared on Tuesday night’s Tonight Show with Jimmy Fallon. This wasn’t the setting where Watt would truly open up about trade rumors involving himself and DeShaun Watson, but when Fallon asked how he deals with all the speculation, Watt said he went to Hawaii for a week after the season ended and he wished he would’ve stayed there.

5. Andrew Siciliano is the guest on the latest SI Media Podcast. The host of DirecTV’s popular RedZone channel talks about the biggest changes he’s seen with the channel over the 16 years it’s been on the air, what it was like for him to miss Week 6 of the 2020 season because of a false positive COVID-19 test, why he couldn’t watch RedZone that day, why he likes the unbalanced schedule between 1 p.m. ET games and 4:25 p.m. ET games, what the end of the regular season is like for him, which NFL player he’d like to see as the subject of a Last Dance–esque documentary, why he thinks sports programs should not cover pro wrestling, his desire to cover politics in a RedZone way and much more.

You can listen to the podcast below or download it on Apple, Spotify or Stitcher.

6. RANDOM VIDEO OF THE DAY: Here are eight minutes of newly released deleted scenes from Season 3 of The Office.

7. SPORTS VIDEO OF THE DAY: The most famous missed field goal in NFL history took place thirty years ago today

Be sure to catch up on past editions of Traina Thoughts and check out the Sports Illustrated Media Podcast hosted by Jimmy Traina on Apple, Spotify or Stitcher. You can also follow Jimmy on Twitter and Instagram.