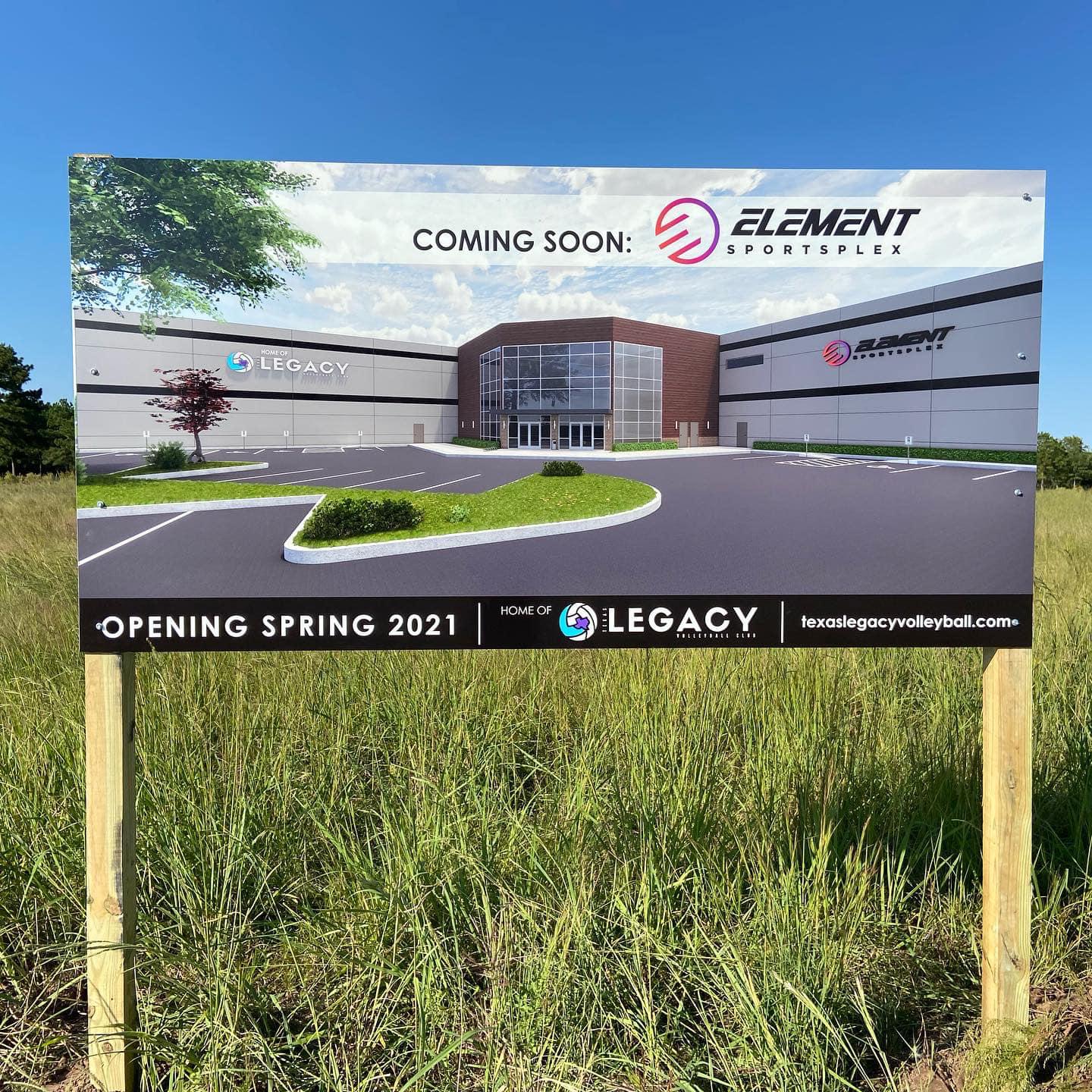 Many volleyball players from the greater Houston area call Texas Legacy Volleyball Club their home during the summer break.

The club based out of the Tomball area grew too big for its current facility a few years ago, Assistant Director Jennifer Cobb said, and have been renting other courts in the area during club season to house all teams.

Texas Legacy Volleyball Club is getting a new home late 2021 in the Element Sportsplex. The complex is expected to be completed by November and is tentatively scheduled to open later that month.

The legacy family is ecstatic about the new facility, Club Director Katie Davis said. Paired with the excitement surrounding the success of several teams this past season, she said the new complex will be of great use for advancement.

“We have outgrown our current facility and the space, convenience and appeal of this project will undoubtedly help us to continue to grow and compete at a level we have not previously had the ability to,” Davis said.

Texas Legacy Volleyball Club was started in March 2014 due to the rapid growth in the area and opportunity to create something different, Davis said. The club strives on working to develop the athlete as a whole by keeping goals small and focus Christ-centered, she said, aiming for quality over quantity.

“This allowed us to be happy where we are and let our relationships and training show what we are about,” Davis said.

As a volleyball club, Cobb said location is extremely important as there are many clubs to choose from in the greater Houston area. She said key target markets since TLVC was created have been the Klein, Tomball, and Cy-Fair districts.

“Tomball is central and convenient to all of these districts, plus it allows convenience from athletes in Magnolia, Montgomery, and the Woodlands as well,” Cobb said.

The club’s current home is located at 21207 Hufsmith-Kohrville Road and has three courts, four offices and a kitchen space.

The new facility will be located at 19220 Theis Lane and have a total size of approximately 45,000 square feet.

Ground breaking for the new complex was held in early May. The site will have a lobby area in the entry, offices and a conference room upstairs overlooking the courts, Cobb said. They’ll also be a concession area, a pro shop and six full-sized volleyball courts to a house all teams under one roof she said, allowing room to grow programs since there are limit registrations in the existing facility due to court capacity issues.

Jorge and Stacey Campos are the creators, organizers, and financial investors of the Element Sportsplex. The Campos family owns the current building as the club has been renting from them for nearly five years.

When Jorge Campos approached the club in the summer of 2019 about resigning the lease, Cobb said they discussed issues regarding sizing and space, realizing it was beneficial to create a larger space instead. She said the Campos family offered to build a multisport complex for the club to run out of, with a side of the complex dedicated to basketball and other sports.

“We have established an amazing relationship as they are volleyball enthusiasts and have put their daughters in our programs for years,” Cobb said.

The Element Sportsplex, in addition to being the home to TLVC, will offer adult leagues and open gyms for indoor sports, Jorge Campos said. Additionally, he said they’re excited about being able to host basketball tournaments and offer a venue to the community and introduce youngsters to different indoor sports.

As sports enthusiast themselves, the Campos family cannot wait to open the facility.

“We are excited about bringing a sports focused way to stay active and healthy,” Jorge Campos said. “We have a long-term vision where we would like to start working on the next phase – which would include additional sports activities including batting cages, volleyball, soccer and football fields.”

Element Sportsplex was privately funded, Jorge Campos said. It was certainly a long process, he said, with many requirements to meet given the size of the project.

The club’s existing building will be vacant, Campos said, and open for lease once the new complex is completed.

The project was made possible because of a grant Jorge Campos and TGC Capital received with the help of the Tomball Economic Development Corporation and City of Tomball.

“Thought it took longer than expected, we believe everything happens for a reason,” Jorge Campos said. “The City of Tomball has been very supportive throughout the entire process and we have received a lot of interest from the community.”

TLVC works with athletes in elementary school, middle school, and high school, specifically ages 5-18. The Little Legacies developmental program runs from ages 5-12, hosting around 200 individuals per session and the club program ranges from ages 11-18 and had about 250 attendees this past year.

According to the club, more than 300 persons registered to try out early this month, July 6-8th.

“The new facility will also allow for us to host tournaments, which we cannot do in our current facility due to dimensions and spacing,” Cobb said. “This will be huge for our club in many ways!”

With a love for sports, the Campos family saw a need in the community in the lack of indoor courts and leagues open to the public. He said they wanted to bring something to the City of Tomball that connected with being active and playing sports.

Courts will be available to rent and help those who want to train, Campos said, lending a hand to those interested in continuing their growth. Additionally, he said the first-class facility will be used for hosting events.

“The mission at Texas Legacy Volleyball Club, connected with us so much, that we believed what they offer girls of all ages is unique to them,” Jorge Campos said. “We are glad and thankful that we can continue our partnership with them and are excited about what this facility will bring to the residents of Tomball and surrounding community.”

Aside from being a state-of-the-art multi-sport complex, Cobb said there’s large glass windows out front and a lobby area for parents and siblings to use during tournaments and practices. Offices will be located upstairs overlooking the courts on both the volleyball and basketball side, she said, with space allocated for basketball courts and strength and conditioning training area where coaches from Uplift will reside and train athletes and those from outside the club as well.

The new complex has been delayed over a year since original plans were formed prior to COVID-19, Cobb said, which halted progress significantly over the past year. She said there were many pandemic-created issues that prolonged the bank process and material delays.

The entire community has rallied around them throughout the entire process, Jorge Campos said, and have received a lot of support from the City of Tomball.

“Everyone is excited about this first-class project and we can’t wait to share it with the community,” Jorge Campos said. “We plan to be creative and host events that are beneficial and fun for the community.”

Campos said Element Sportsplex, Texas Legacy Volleyball, and Uplift are working together to not only bring a sports centered and training facility but one that will encourage the youth to develop a love for healthy competition through sports.

“Additionally, the adults will get to experience that same competition that we enjoy in various indoors sports leagues,” Jorge Campos said. “Come out to the Element in November and we will show you what we are talking about.”