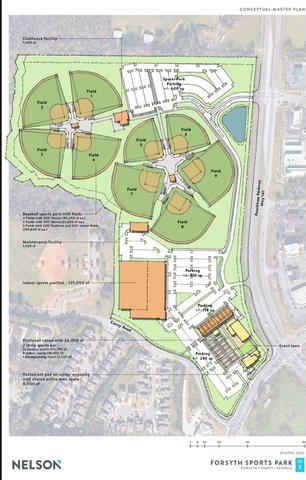 “Everything we do will be the best of the best,” said Michael Grade, chief operating officer of the SoFo Sports Group, “so our outdoor fields, fully synthetic turf, the best LED lighting that’s out there, video scoreboards at every field, chairback seats at every field, shade structures over those seats and then video cameras that can cover the action and folks that are not there can watch it as every game will be live-streamed. That will be the same indoors as well.”

The indoor sports center – which will be operated by Sports Academy, a training center with locations in Texas and California – is planned to have eight basketball courts which can be converted to 16 volleyball courts and will eventually include a second floor for more space.

“This group, as you can see, most are local,” Grade said. “Dominique, for example, will be very engaged with youth camps and clinics for the community. So, these are all people that are committed to not just having their names somewhere but working with us as well.”

As planned, the site’s diamond fields would open in 2023 and the development will be fully functional by 2024.

In the presentation, officials said the business is planned to have several revenue streams: club teams and tournaments for baseball, softball, basketball and volleyball; pickleball court rentals, leagues, tournaments and socials; leagues, tournaments, physical therapy and sports performance training at the center’s sports academy; streaming video subscriptions; and revenue from retail, restaurants and concessions on site.

Officials with the park have projected that 975,000 visitors will use the facility each year and expect more than $150 million annually in economic impact for Forsyth County between money spent at the park, on hotels and at local restaurants and retail.

The construction of the project is expected to cost just under $143 million.

Planned funding for the project will include $100 million from a county-supported bond, $30 million in subordinated financing and $12.8 million in SoFo Sports Group equity

The bond will have a 30-year term, which SoFo Sports Group will be financially responsible for all debt obligations for.

Developers are also requesting some waivers to property taxes and permitting fees, which would need to be approved by the Forsyth County government.

During the discussion, many suggested that the county could see a “halo” effect of other businesses wanting to relocate to be near the park.

Along with the training and leagues provided at the facility, officials said the local community would see benefits through having a place for local high schools to use as a backup facility, being used for rec league championships, offering county recreation clinics, and setting aside time and space for open use and rentals.