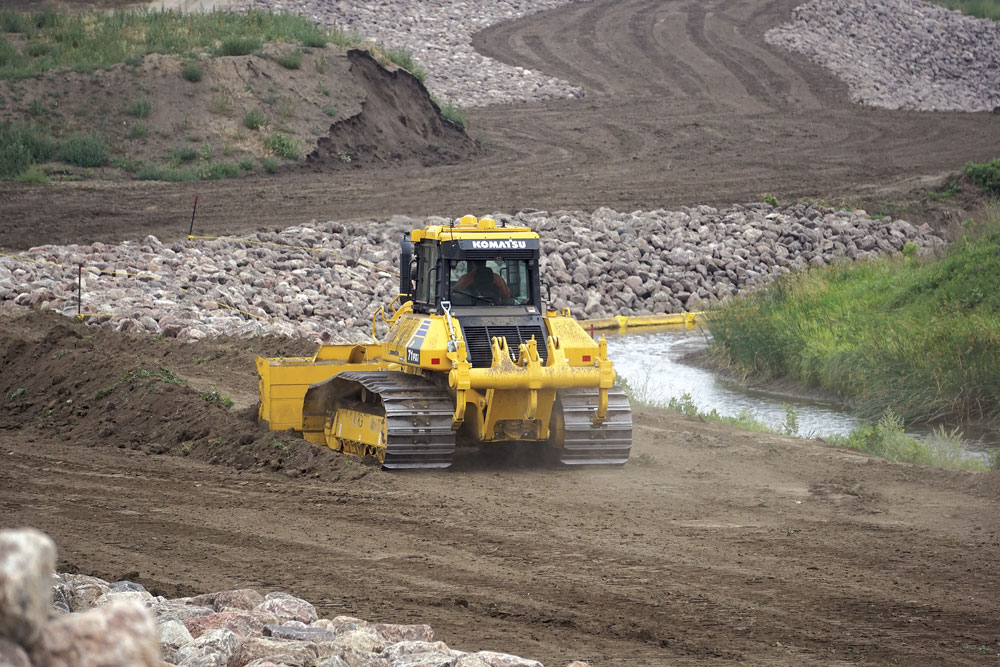 BISMARCK – The director of the newly created North Dakota Department of Water Resources says navigating policies and building relationships will be key in creating sustainable water resources for the state.

Gov. Doug Burgum appointed Andrea Travnicek, who has roots in Minot, to head the department. Travnicek has more than 15 years of experience in natural resources, conservation, energy, agriculture and public policy.

Travnicek, who most recently had directed North Dakota Parks & Recreation, said her initial focus has been on items associated with branding a new department, such as new website at dwr.nd.gov, new logo and updated social media platforms, along with ensuring the public is aware of the name change.

“The great thing is all the programs will remain the same, so whether that’s water development, regulatory, appropriations, atmospheric resources – all those programs – nothing changes with that. The only thing that changes is the new structure,” she said.

The department has hired an interim state engineer, John Paczkowski, while seeking to fill the vacant position. The first State Water Commission meeting as part of the new department will be Thursday.

Travnicek said she will be spending this next month reviewing policies, getting acquainted with the department budget approved during the past legislative session, reaching out to legislators and community leaders and working with department staff to identify options for moving projects forward.

Travnicek grew up in an Air Force family and spent her youth in Minot. Her parents continue to live in Minot, where her father is retired from the military and works as a civilian at Minot Air Force Base. Her interest in natural resources was influenced by family time spent at the lake in Minnesota and visiting parks. The family’s travels with the Air Force also showed her the value of relationships, communication and understanding where others are coming from, she said.

She served as senior policy adviser for natural resources in the North Dakota Governor’s Office from 2010 to 2016 under then governors Jack Dalrymple and John Hoeven. She served three years in leadership positions at the U.S. Department of the Interior. She was principal deputy assistant secretary for fish and wildlife and parks, overseeing the U.S. Fish and Wildlife Service and U.S. National Park Service. She later became deputy assistant secretary for land and minerals management.

She returned to North Dakota in May 2020 after appointed by Burgum to lead Parks & Recreation. In the midst of the COVID-19 pandemic, many states had closed their parks.

“What I really enjoyed about North Dakota is we made sure that we were open right away. We recognized the opportunity that people wanted to get outside, find a safe way to social distance, be able to recreate in a safe way, and North Dakota was able to continue to offer that,” she said. “We had to be a little bit innovative, which I thought was great. The team stepped up.”

The department adapted its amphitheatre programs to a campfire-style series and provided more individual learning opportunities using online resources and self-guided hikes. The department expanded a 12-month hike challenge at Fort Abraham Lincoln State Park to all the state parks. The department also was able to obtain $7.9 million from the Legislature to modernize aging park infrastructure.

Travnicek said her decision to return to North Dakota from Washington was prompted by a desire to move closer to family and to work on issues that affect North Dakotans.

“I’m just an individual that really enjoys trying to find solutions to some of these complex issues and being able to do that in my home state,” she said.

Natural resource management offers the type of complex issues that intrigue her, she said.

Because of the broad scope of water issues, Travnicek cited the importance of staying aware of changing priorities at different levels of government and making sure that North Dakota’s interests are considered.

“At times we do have to ask for that federal government assistance, but, of course, we also don’t like those times when they’re trying to overreach as well, so you definitely have to try to navigate and then bring your situations to the table,” she said. “Being at the table is a big deal. You want to make sure that they know who you are and what you’re looking for and how you can, hopefully, work together.”

Travnicek brings to the new department her experience in working with the U.S. Army Corps of Engineers and Department of the Interior on projects in California and along the Colorado River, the Everglades and Columbia River. She also has a familiarity with the large flood protection and water supply projects in North Dakota. Her family members were impacted by the 2011 flood in Minot.

“It’s really exciting to put the water hat back on and and really dive into it because I think we are at an important time with the drought that’s upon us and with some of the things that we might be seeing coming down from the federal side that we need to make sure that we’re staying on top of,” she said. “So it’s great to be able to be in this role now and really step up and assist Governor Burgum and the citizens of North Dakota with trying to figure out how we can get people access to water in efficient and cost effective ways.”