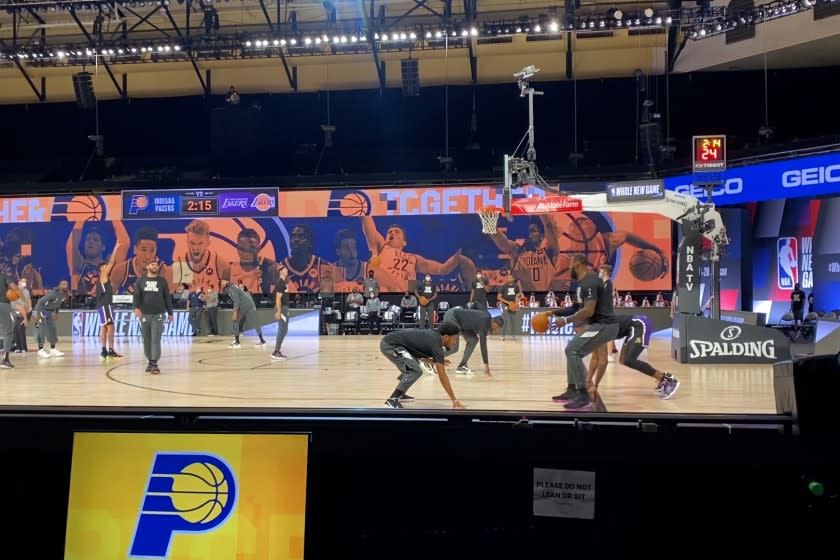 Fourth in a series of Times Sports stories looking at some of the biggest sports moments and storylines of 2020.

As the Florida humidity broke, a wildly diverse group gathered at the Casitas Pool, the name for the area just outside the lap pool that was nuzzled between three buildings and the campus’ fitness center.

There was a former NBA All-Star sharing cigars and his butane lighter alongside a team scorekeeper, an arena DJ, broadcast technicians, event coordinators and NBA officials, all hanging out, sharing drinks and good stories as a late night became an early morning.

It was maybe the only place in the country where this could have happened, a group of previous strangers bonding as friends around a table without fear of contracting the coronavirus. They could live this way because they were residents of the NBA bubble, a $175-million basketball theme park created in the middle of an actual theme park — Disney World in Orlando.

It was a once-in-a-lifetime plan, to put 22 NBA teams into three resorts at Disney World to try to finish a season suspended by the COVID-19 pandemic. During the playoffs , life eventually was condensed to one hotel, everyone sharing a campus.

You might see LeBron James riding a bicycle or Dwight Howard listening to an oversized boombox. Commissioner Adam Silver and the players union’s president Michele Roberts would share a meal while Heat center Bam Adebayo picked up dinner from the lobby sports bar.

The quarters were close. Clippers center Ivica Zubac answered questions about Nikola Jokic as the Nuggets center walked past. And Lakers general manager Rob Pelinka would run the same route before games as Miami executive Adam Simon, the two competitors sharing the road hours before competing in the NBA Finals.

It ended with a champion — the Lakers — but more impressively it ended without an outbreak among the 1,500 people who called the bubble home, the entire plan holding up while the virus raged just outside of the bubble’s perimeter.

Games looked drastically different. Fans were present — digitized on boards that wrapped three sides of the court. Cheering was pumped in to the arenas, where the sneaker squeaks and the jump-shot clanks sounded a little louder bouncing around in a mostly lifeless gym.

If ownership groups wanted to watch games, they did it from a plexiglass-enclosed suite. Referees had their whistles retrofitted with bags to catch drops of spittle. Postgame interviews were conducted in offices league officials nicknamed “the penalty box,” with players speaking into a camera, staring at their own image while faceless voices remotely conducted the news conference.

It all worked — but no one wants to go back.

“No chance,” one veteran said when asked about the possibility. “Never going to happen.”

No guests were on campus until after the first round of the playoffs, and even then, those guests were subject to weeklong quarantines. Partners, friends, support systems had to be severed while the league tried to function and get through the schedule ahead of it.

Teams hated it — and some seemed less than heartbroken when elimination came. But the two that were there the longest embraced it most and found ways to cope.

The Lakers had Madden tournaments and team meals to break the monotony of seeing the same walls every day for more than three months.

The Miami Heat launched dueling pop-up coffee shops. Heat star Jimmy Butler began brewing and selling coffee out of his room — “Big Face Coffee” — where $20 got you whatever you wanted. A Miami trainer opened up his own shop and called it “Little Face Coffee,” giving Butler a competitor on the team’s hotel floor. (The trainer’s coffee was free.)

And the audio technicians transported their big-event tradition of brewing highly-concentrated Cuban coffee underneath the bleachers into the bubble, walking around pregame with a free cup for anyone who needed a pick-me-up.

And after those Casita Pool nights, there were usually more customers than coffee.

Coffee wasn’t the only thing flowing inside the bubble, helping people manage life inside this created world.

A local liquor store fulfilled orders every day the bubble was in operation, dropping off beer, wine and spirits to the massive mail center. Teams teased one another for their wine habits, even dubbing one executive’s room the floor’s “liquor mart.”

Referees coped by setting up a pickleball court in their hotel’s main courtyard, turning the game into one of the biggest social gathering spots on the side of the resort reserved for nonplayers.

For hours under the sun, the league’s refs would take on all comers in between disagreements, with former NBA star Richard Jefferson once spiking a paddle so hard in frustration that it slammed off a second-story window.

All of it masked the realities that people were away from loved ones, dealing with the mental strain of being physically and mentally separated from a country in crisis.

“It’s probably been the most challenging thing I’ve ever done as far as a professional, as far as committing to something and actually making it through,” Lakers star LeBron James said before the NBA Finals. “… I would be lying if I sat up here and knew that everything inside the bubble, the toll that it would take on your mind and your body and everything else, because it’s been extremely tough.”

People in the bubble lived two lives — the one inside the walls and the one back home where the problems of the world went on without them. It was a mental strain, being two places at once, and it pushed everyone toward exhaustion. But it also provided the blueprint — mask wearing, social distancing, contact tracing and testing working in concert — to keep everyone safe.

On the night the bubble burst after the Lakers won their championship, festivities broke out all over campus. The Lakers partied in an open-air restaurant in the middle of a lake. The staffers headed to a nearby parking lot to celebrate with an open bar and a DJ.

It all was such an accomplishment, people who lived and functioned in the world the NBA created.