My DOOM gaming chair smells like beef. Now I want to rip and tear 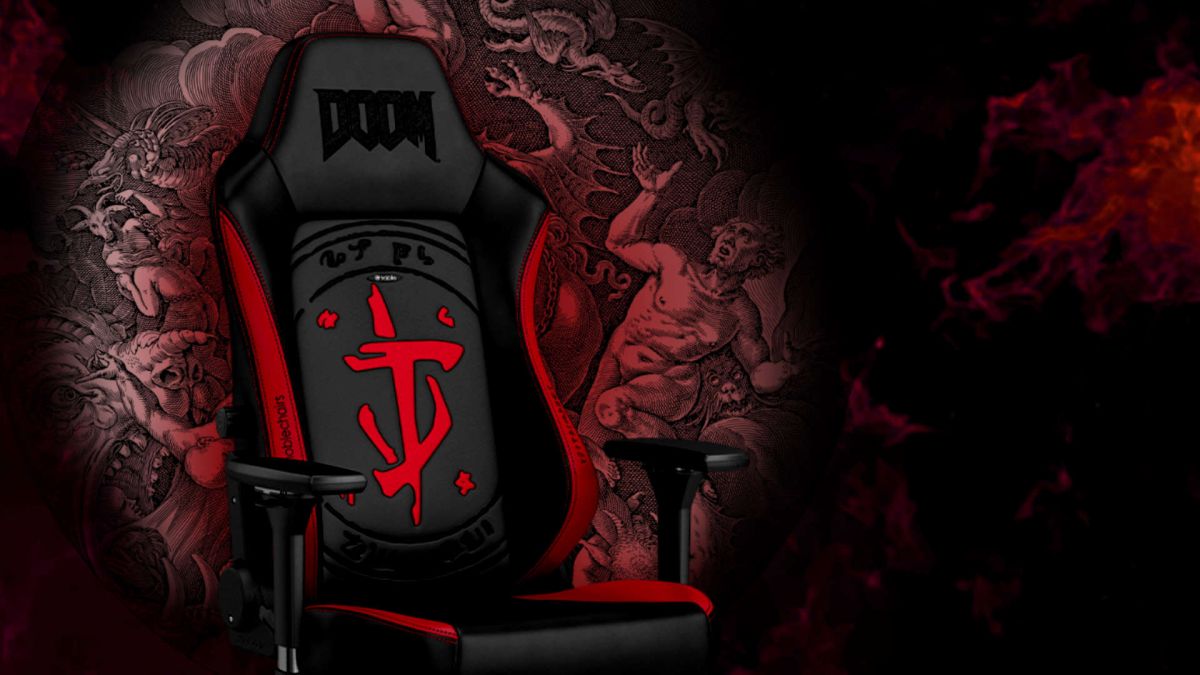 If you’ve been in the market for a gaming chair this year, you might well have run into my review of the Noblechairs Hero gaming chair Doom Edition. As this was something reminiscent of an artefact of the occult, my review had joked nonchalantly about the “distinctly hellish vibe” emanating from it, without any comprehension of its true inner evil. So, as this abridged account had only skimmed the surface of the blazing calamity trapped within its accursed frame, I thought I’d bring you the full story.

Having been previously damned to discomfort by the rocklike padding of an unbranded ‘gaming’ chair, the second my boss suggested a straightforward gaming chair review for me—a newcomer to the team—I launched myself at the opportunity. But as I accrued my research on the chair in question, the original feeling of excitement soon faded, giving way to a surging trepidation.

The day it fell upon my doorstep, my anxiety peaked. The hulking package had arrived suspiciously swiftly, as if carried on the wings of some gnostic harbinger that had been lurking in the shadows, awaiting it’s moment to pounce.

I remember refusing to open it at first. But as the somewhat imposing package lay propped against the kitchen cabinets that day, I found my gaze inescapably drawn to it. All the while, images of the most devilish pleasures I could imagine passed through my thoughts, as if projected directly into my mind’s eye from that awful box. It was as if some strange force was willing me to assemble the thing, promising me unparalleled delights to do it’s bidding.

And so, as my resolve finally dwindled, I found myself compliant.

In the weeks that followed its assembly, the chair remained unused in the corner of the living room. Unmoving, but ever watchful. Burning a hole in the back of my skull with unseen eyes. One evening hence I sniffed the air to discern the faint smell of raw meat, which grew stronger as the days passed. I checked the fridge, the bin, and every other object I could think of, but I knew it was the chair’s doing.

Each time the smell emerged, flashes of gore and heinous rituals plagued my waking vision, wearing me down until the smell actually became vaguely pleasant. Finally, after a week of frightful and relentless phantasms, I was too tired to resist the comfort of this unhallowed throne of Beelzebub.

Now, sitting encompassed in its vast immensity, I was unnaturally enamoured. I refused to allow anyone else to sample its profound comfort. It was my own. My precious.

Still, soon I became increasingly aware of a sinister presence surrounding me. One that arose only when it was sure I was alone. Though I could not pinpoint any single entity, I was mindful of constantly shifting figures scuttling about in my peripheral vision. When I would try to focus on one, it would scurry away before another instance took its place on the far side of the room.

Strangely, the more of these creatures that flitted about me, the less afraid I became. The chair, to me, had become some kind of interdimensional transport from which I could probe the borders of a strange and provocative realm of darkness.

I knew as long as I was firmly planted on it, I was untouchable.

Time drained away rapidly from my new permanent residence in the chair. I had not arisen in over a month and my poor pet rabbit, Daisy grew more and more skittish as the weeks flew by in a blink. I barely noticed at the time. Morbid curiosity had consumed me, and on more than one occasion I had attempted to commune with the beings now sharing my living space. To little avail.

However, one evening when the smell of sweet, raw meat was particularly strong, I felt myself drifting off, despite feeling quite well rested. Slowly, the chair reclined itself and I lost consciousness, dropping deeper and deeper into an intense slumber.

The ominous hell-scape that unfolded before me in this unyielding nightmare will haunt my waking thoughts forever more. Here, unable to move, or close my eyes, I witnessed unspeakable terrors, unparalleled evil so horrific that even to describe it to you now would be a crime against humanity. After what seemed like endless eons, from the flickering flames of hell I watched, as an army of vile, hulking monstrosities arose. They marched along in deep ranks across the scorched vistas of earth since annihilated, and I knew this was a vision of things to come.

In a flash, I awoke.

I was sitting no longer sitting atop my beloved throne, but in a heap on the floor of my living room. The chair had vanished from beneath me, and a message from three years prior flashed up on my computer screen, as if it were new. A message from my partner, a hardened yet deeply loving space marine.

“I wouldn’t do it. I refused to kill those innocent civilians. Now they’ve transferred me to the UAC base on Mars, where some quack insists on doing these crazy experiments. Just… take care of Daisy for me, won’t you.” I smiled as I re-read, reminiscing about his softer side.

Turning to check on Daisy, my jaw dropped. Her cage had been torn asunder by some ruthless, gargantuan claws. A small pool of blood was all that remained. Strangest of all, the trail of blood from the cage lead right there, to where I was sitting. Though I can’t say why.

To this day I couldn’t tell you what happened to Daisy, or whether the Doom chair ever really existed. My boss has no recollection of it [who even are you? Do you work here? -Ed]. Perhaps it was just a figment of the depraved annuls of my imagination.

Still, every now and then I hear a distant scuttling. And the smell of raw meat seems to find it’s way into my nostrils. Doesn’t it smell good?