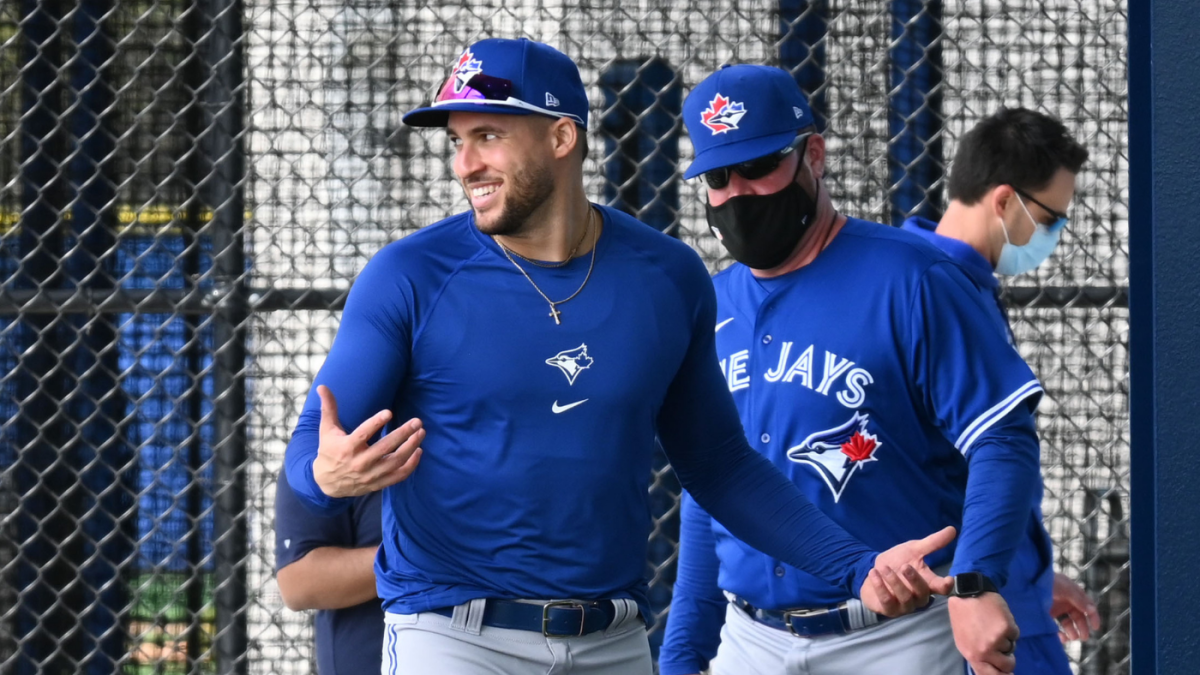 Spring training has sprung and players have reported to camps across Arizona and Florida. This weekend, Cactus League and Grapefruit League pay will begin, and I can’t wait. Real live baseball is on the horizon. Hopefully the pandemic cooperates. Fingers crossed, everyone.

Throughout spring training my fellow CBS Sports MLB scribes and I will bring you a weekly roundtable breaking down, well, pretty much anything. The latest news, a historical question, thoughts about the future of baseball, all sorts of stuff. Last week we debated the best shortstop in baseball. This week we’re going to hand out some offseason awards.

R.J. Anderson: George Springer, Blue Jays. Let’s not overthink this. In Springer, the Blue Jays landed the top player in the class. He gives them another All-Star-caliber position player, one who can play a premium position and who (by all accounts) is a good clubhouse type. What more can you want?

Matt Snyder: Springer. The Blue Jays showed last season they were making good on their up-and-coming status and adding a veteran with a huge postseason resume to the top of their order only further solidifies their status as a contender. The offense has the makings of a powerhouse and it’ll all start with Springer Dingers at the top.

Dayn Perry: Marcell Ozuna, Braves. From the team standpoint, getting a hitter like this on a four-year deal (with a very reasonable club option for a fifth year) is quite good. Ozuna’s coming off an MVP-caliber 2020, and his elite quality-of-contact numbers over the last two seasons bode very well moving forward. As well, it’s likely the NL winds up with the DH starting in 2022, so that’ll provide a soft landing for him as he moves deeper into his thirties. On top of all that, Ozuna is a beloved clubhouse figure.

Mike Axisa: I agree it’s Springer. With a normal 10-team postseason this year, he’s the kind of high-impact player who pushes the Blue Jays from bubble team to a favorite for a postseason spot, I think. Their center field situation has not been great the last few years and now Toronto has arguably the best non-Mike Trout center fielder in the sport. Springer is a substantial upgrade at an important up the middle position. No need to overthink it. He’s my answer.

Katherine Acquavella: George Springer. It’s a serious upgrade for Toronto, and gives the Jays one of the top offenses heading into the 2021 season. Beyond that though, I think Springer’s going to be a good fit with the young squad bringing with him experience after seven years in the big leagues. He was already part of a youth movement while with Houston, so this should serve as a somewhat familiar scenario for him.

Now, that’s not to say, that his involvement in the Astros sign-stealing scandal is forgotten, but he’s still a well-above average hitter and should have the chance to help lead Bo Bichette, Vladimir Guerrero Jr. and the rest of the young Jays group to another postseason spot. The Springer addition is going to play a big role as Toronto tries to move from a talented but developing ball club to a contending one.

R.J. Anderson: Joc Pederson, Cubs. I’m not sure if Pederson actually counts as under-the-radar; let’s pretend he does for our purposes here. To get him on a one-year deal for a trifling amount of money is a heck of a move. Sure, Pederson is best used as a platoon corner outfielder, but he hit the ball very hard last season, and did so on a trajectory that bodes well for his future output.

Matt Snyder: I’ll go with the Brewers getting Kolten Wong. His option was surprisingly declined by the division-rival Cardinals and the Brewers eventually grabbed him. Not only is Wong likely to run a high on-base percentage and run — and we know the Brewers love stealing bases — but he’s one of the best defensive second basemen in baseball. A major bonus here is the addition of Wong moves Keston Hiura — likely a good bat but a butcher at second base — to first base.

Dayn Perry: Marcus Semien. I think his underlying indicators at the plate suggest a bounce-back season in 2021, and I also like his chances to stand out defensively after the move from shortstop to second base.

Mike Axisa: I’ll go with another Blue Jays signing: Kirby Yates at one year and $5.5 million. He was very bad last year (six runs in 4 1/3 innings) and is coming off elbow surgery to remove bone spurs, but I’m bullish on a bounceback. Surgery to remove bone spurs is not like surgery to repair a ligament. It’s a fairly common procedure and there are guys around the league who have bone spurs taken out of their elbow each offseason and return with no ill-effects. When healthy, Yates has been an elite closer, and I think he’ll be that guy again in 2021. Getting him at that price when other relievers like Pedro Baez (two years and $12.5 million), Brad Hand (one year and $10.5 million), and Alex Colome (one year and $6.25 million) all received more is a pretty nifty move.

Katherine Acquavella: Carlos Santana signing with the Royals. I guess this isn’t quite “under-the-radar,” but I’m going with it. Looking at this as more of a sneaky-good move for Kansas City, a team that has surprisingly been active this offseason. Santana is coming off a down year, but he still posted a solid .349 on-base percentage (which would have ranked second on the Royals last season) and a league-leading 47 walks so he should be ready to return to his 2019 numbers which earned him an All-Star nomination and 16th-place AL MVP finish. I think ultimately what’s Cleveland’s loss (they declined his $17.5 million club option) will be Kansas City’s gain.

R.J. Anderson: Mets. The Padres are another acceptable answer. I lean Mets because I think people are underrating the impact of retaining Marcus Stroman and adding Carlos Carrasco. New York also spent a fair amount on the underpinning of the roster. That doesn’t necessarily mean it’ll all work — their farm system remains laughably shallow at the top — but they moved the ball in the right direction.

Matt Snyder: I agree that it’s the Mets. There’s been far too much focus on missing Springer and Bauer. They got a superstar shortstop and an upper-mid rotation arm in Carrasco. As R.J. mentioned, Stroman counts as an addition, too, while they also signed the second-best catcher in the free agent class. Taijuan Walker fits nicely at the back of the rotation and Trevor May was a sneaky-good bullpen addition.

Dayn Perry: Have to agree with the Mets. Adding an elite performer like Francisco Lindor obviously moves the needle in a big way. As well, the rotation should be in much better shape with Marcus Stroman, Carlos Carrasco, and Taijuan Walker. James McCann stabilizes the catcher role, especially defensively, and the bench and bullpen have also been fortified.

Mike Axisa: The Padres. It’s hard to improve a team that had the third-best record and second-best run differential in baseball last season, but San Diego did it, and in a big way. A case can be made Yu Darvish and Blake Snell are the two best pitchers to change teams this offseason, and Joe Musgrove is no slouch either. The Padres added those three without sacrificing the top of their farm system — they still have seven players in Baseball America‘s top 100 prospects list, the most of any team — and then they added Ha-Seong Kim, retained Jurickson Profar, and got Mark Melancon and Keone Kela for a combined $4.2 million, or a little more than what the Diamondbacks will pay Joakim Soria ($3.5 million). The Mets had a fine offseason but eh, they left me wanting more. The Padres are my pick.

Katherine Acquavella: Mets. They really took a huge leap forward from 2020, and honestly, they weren’t that bad of a team last season. They had a solid lineup and rotation, but now, the moves this winter help them get huge upgrades all around. It’s even more impressive thinking about all of their improvements when you realize that aside from Marcus Stroman, who accepted their qualifying offer, they didn’t sign a top-10 free agent this winter. The Mets are most improved, and because of it, could very well be the reason they steal the NL East title from the Braves this season.

R.J. Anderson: Rays. Usually, the team that loses the championship takes an aggressive approach during the winter. The Rays didn’t, really. They traded Blake Snell (and yes, the package might work out well); they let Charlie Morton walk; and they came up empty on target after target, be it Corey Kluber, Jameson Taillon, or Joe Musgrove. Maybe their internal depth and Kyle Snyder can work his magic with Michael Wacha and Chris Archer, but it’s hard to feel great about this winter.

Matt Snyder: Cleveland. Not nearly enough came back for Lindor and Carrasco and the best addition from outside the organization was Eddie Rosario. Let’s not forget they tried to save $1 million by trying to get someone else to claim Brad Hand before they had to decline his very-affordable option (the $1 million was the buyout for declining said option). If the Dolan family is really doing so poorly, monetarily, they should just sell the team. What a joke.

Dayn Perry: Rockies. That’s just a pathetic return for a player of Nolan Arenado’s caliber and standing. This is a completely rudderless organization under GM Jeff Bridich, who’s pretty clearly out of his depth.

Mike Axisa: The Angels. It’s the same story every year. They miss the postseason, ownership and the front office say they want to get back to the postseason and will do what it takes in the offseason, they bring in some low-upside pitching (this year it’s Alex Cobb and Jose Quintana), and then they miss the postseason again. I just don’t understand. Mike Trout turns 30 this August and we’re at the point now where we can reasonable say he’s closer to the end of his reign as the game’s best player than the beginning, and this is the type of pitching staff they keep putting around him. The AL West is as winnable as it’s been at any point in the last five years, and yet Alex Cobb and Jose Quintana. How underwhelming.

Katherine Acquavella: Angels. I think this choice can mostly be chalked up to expectations not meeting reality. I had higher expectations for the Angels this offseason, and I thought they shared a higher sense of urgency to go out there and improve their ball club after five consecutive losing seasons. They needed to get a frontline starter for their questionable rotation, but they only signed Jose Quintana. They needed a lot more. This winter turned out to be another year where the Angels fail to build around superstar Mike Trout. After missing out on Gerrit Cole last offseason, the Angels — with a new GM — were expected to make at least one major splash at the top of the market this offseason. Instead, it looks like it might be another year of wasting more of Trout’s prime. It’s getting old. I mean, it was old five years ago.