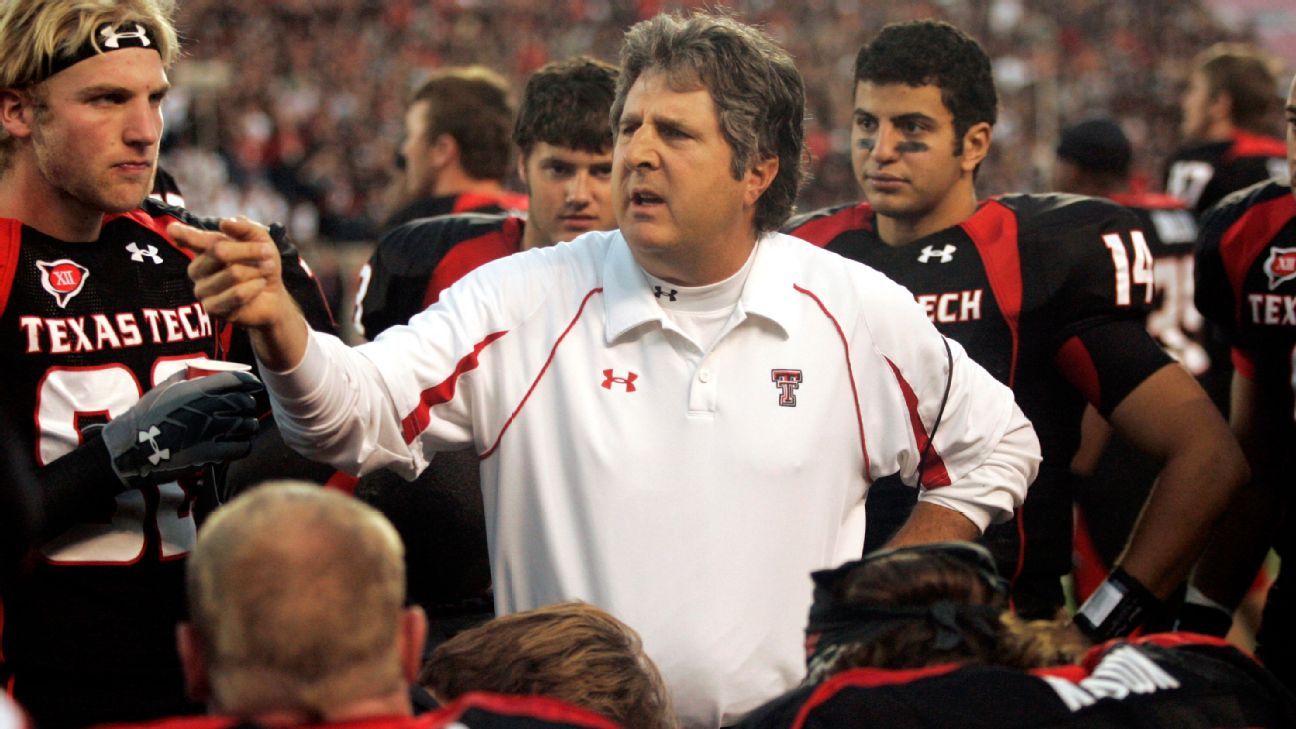 Before we knew Mike Leach was a first-ballot hall of fame interview, before the sideline dissertations about marriage or candy or anything in the world, really, there was Mike Leach, the football genius.

Leach, who died Monday night at 61, likely would scoff at that notion, that anyone needed to be a genius to do something like coach football. But all the off-field quirkiness aside, his introduction to major college football at Oklahoma, followed by a trailblazing tenure at Texas Tech, spawned a revolution in the sport.

When former Sooners head coach Bob Stoops arrived in Norman in 1999, he brought Leach, who had been Hal Mumme’s offensive coordinator at Kentucky and had frustrated Stoops, Florida’s defensive coordinator at a place that wasn’t supposed to challenge the SEC’s best teams. It marked a seismic shift at Oklahoma, but the results were immediate, with a national championship in 2000 a year after Leach departed for Lubbock.

Two decades later, Leach’s air show dominates the sport at every level. It began at Oklahoma but soon conquered the state of Texas and the Big 12. It became a staple of high schools all over the country, and now NFL superstar Patrick Mahomes, a child of the Air Raid at Texas Tech, is running the same offense as an NFL MVP in Kansas City.

“Mike had a bigger impact on football, whether pro football, high school football or college football, than anybody in my generation,” said TCU coach Sonny Dykes, a former Leach assistant at Kentucky and Texas Tech. “He just changed the way people approach the game.”

It’s easy to forget, after all these years of mind-bending points on the scoreboard and record-setting performances, just how stark the transformation has been. In 1998, Oklahoma was held to 17 or fewer points in six of its 11 games. The Sooners ranked fifth-to-last nationally in passing, with nine touchdown passes to 16 interceptions in 1998. Among Big 12 teams, only Texas and Kansas State ranked in the top 50 in the country in passing. In 1999, with an unheralded transfer quarterback — Josh Heupel, from Snow College in Ephraim, Utah — running a wide-open passing attack where Barry Switzer’s Wishbone teams used to run up and down the field, there was a healthy dose of skepticism.

“There was a period of time where the two most wanted guys in the state of Oklahoma were me and Josh Heupel,” Leach told ESPN in 2017. “Me for suggesting that you could throw the ball at Oklahoma and in the Big 12. And Josh Heupel for having the temerity to play quarterback and not be able to run faster than 5 flat.”

But Stoops committed to Leach’s offense and the Big 12 was put on notice. A new era was ushered into college football.

“Mike Leach’s offense presented problems that we had never had to address,” said former Texas A&M coach R.C. Slocum, a legendary defensive mind who produced some of the greatest defenses of the 1980s and 1990s and all but broke the run ‘n’ shoot offense, another pass-happy scheme. “I thought we were pretty good on defense. And he made us scratch our heads, and me scratch my head, more than any coach I’ve ever faced. I had a great admiration for him.”

Leach not only produced record-setting quarterbacks; he forced competition to keep up with him. By 2008, the Big 12 had five of the 10 highest-scoring offenses in college football. And Leach drew the curiosity of people who were interested in a new way of thinking in college football.

Like a walk-on quarterback from Muleshoe, Texas, about 70 miles from Lubbock, named Lincoln Riley.

“They kind of captured the attention of everybody,” he said. “That’s why I went to Texas Tech. I loved what they were doing and I wanted to find some way to get a chance to be a part of it.”

Mumme, the creator of the Air Raid, will be the first to tell you that while he may have designed it and spread the word when he was at Kentucky, Leach became its champion in Lubbock. While rewriting record books, Leach also threw open the doors.

In the early 2000s, coaches made pilgrimages to Texas Tech, where they couldn’t believe the simplicity of the offense. What they found, instead, was a commitment to repetition and details and a fearless determination to do what you do. And Leach would tell anyone anything.

“A lot of coaches keep secrets, “Dykes said. “Mike felt like part of his job as a coach was to teach. He taught a lot of people the offense. I think he felt like it was good for the game of football.”

And the more the merrier for Leach, who loved to meet interesting people from all backgrounds. He took pride in the popularity of his philosophy, once dismissed as a gimmick.

“I’ve never been to a place where you had more coaches around constantly,” Lincoln Riley said. “So many people. You think just Texas high school coaches. No, I’m talking professional coaches, I’m talking college coaches, high school coaches from all over the country. Every single year we had somebody come from abroad. There was a group from Japan that came every year, groups from England that came over I mean, you name it.”

And like at Oklahoma, the Air Raid took flight at places that previously weren’t exactly known for their fondness for the forward pass.

“When Kliff Kingsbury was the head coach at Texas Tech, he once told us that he thought that 75% of the high schools in Texas ran our offense,” Mumme said.

Leach earned the respect of some of the legends of the game along the way.

Leach never won a conference title, but always coached at historical have-nots in the Big 12, Pac-12 and SEC. He never got a shot at one of the sport’s powers, either, because people thought his unorthodox style wouldn’t work on the big stage, or because of his mouth and his tendency to say whatever he felt.

“Like all innovators in sports, he finds himself in an uncertain social position,” “Moneyball” author Michael Lewis wrote in a New York Times magazine profile. “He has committed a faux pas: he has suggested by his methods that there is more going on out there on the (unlevel) field of play than his competitors realize, which reflects badly on them.”

But his tenure at each place was rarely matched in history.

Before Leach’s arrival, Texas Tech had been to the Cotton Bowl, historically a desired destination for Texas schools, just twice — in 1939 and 1995. Under Leach, they went twice in nine seasons, in 2006 and 2009. They have not been back since his departure in 2010. He’s the only coach in 103 years to win 11 games at Washington State.

Fittingly, Leach’s last win, Mississippi State’s 24-22 triumph over Ole Miss in the Egg Bowl, was the Bulldogs’ seventh win over a team ranked in the AP poll while the Bulldogs were unranked under Leach in the past three seasons. No other school has more than four unranked vs. ranked wins in that span.

“He gave us all confidence that we could be ourselves and we didn’t have to emulate Lou Holtz,” Dykes said. “That was probably the biggest lesson that I learned, that you can see the world differently and still be a successful college football coach.”

As a result, a group of coaches who grew up watching Leach’s stubborn insistence on spreading the field have forced schools like Alabama to bend to them, not the other way around. Nick Saban famously said, “Is this what we want football to be?” about no-huddle offenses, and a generation responded in the affirmative. Now, Saban and contemporaries like Bill Belichick are running the same wide-open concepts.

“It all boils down to creativity and most importantly, courage,” Riley said. “It’s hard to go against the status quo, especially in a game like football where there’s such a rigid way of doing it. He broke through and found another way, which a lot of people have tried. He’s one of the very few that has done it successfully.”

His next wave of protégés has gotten the opportunities he never had and seized them. Leach’s influence has rarely been felt as strongly as it has this year. Dykes crashed the College Football Playoff in Year 1 at TCU, a year after a 5-7 season. Riley took over a 4-8 USC team, went 11-2 and coached his third Heisman Trophy winner in six years in Caleb Williams. The runner-up, Max Duggan, played for Riley’s brother, Garrett, who works for Dykes and is another former Tech quarterback. Tennessee quarterback Hendon Hooker, who finished fifth, played for Heupel, the guy who jump-started everything for Leach in Norman.

“Look at the people that were fortunate enough to work for him,” Dykes said. “They’ve all had a tremendous amount of success. Mike’s way of teaching empowered young people. That’s one thing he did better than anybody. He wasn’t afraid to take a 22-year-old kid and give him a bunch of power if he believed in him.”

Those former assistants took that to heart too, and ushered in a new wave of coaches who have nontraditional backgrounds, because Leach, a former lawyer who played rugby at BYU, didn’t care. Dykes was a college baseball player. Baylor coach Dave Aranda was a philosophy major who didn’t play college football. Dana Holgorsen played for Mumme and Leach at Iowa Wesleyan, which just happened to be in Holgorsen’s hometown of Mount Pleasant, Iowa.

And Riley, the walk-on, has ascended to the bluest of blue bloods in the sport, going 66-12 at Oklahoma and USC.

“He didn’t really care where people came from or pedigree or or anything like that,” Riley said. “It’s always been about, are you smart? Are you interesting enough that he’s going to learn something from you or enjoy conversation? That was one of his greatest gifts. He was such a great evaluator of coaches. You see his hand prints on everything around college football right now.”

Mumme’s offense and Leach’s personality together changed football forever. Mumme, who said Leach was like a brother to him, remembers how remarkable it is that the two ended up together. Mumme had two applicants for the Iowa Wesleyan offensive line coaching job. One was Leach, who had graduated from Pepperdine law school but decided to go into coaching, so Mumme said he got the job kind of by default.

The end result was one of the most influential careers in football history. And by the way, he made sure the show was worth the price of admission too, which Leach always felt was the point of sports.

“Mike has made football more fun for people than they deserved,” Mumme said. “If you watched Mike Leach, you had fun watching.”